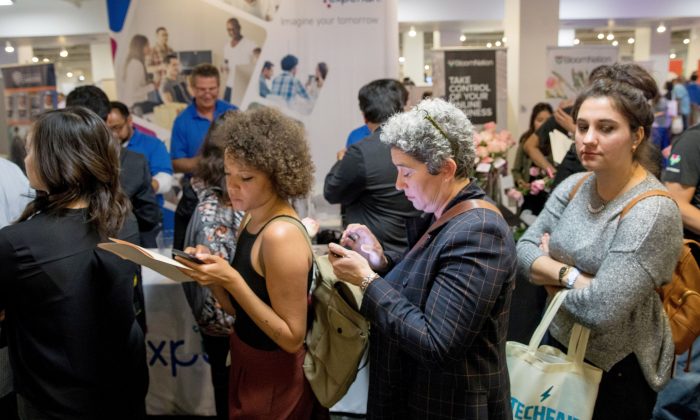 The economy added 196,000 jobs in March, pacifying concerns about the pace of the job market sparked by uncharacteristically low job growth reported in February. President Donald Trump was optimistic about the news but blamed the Federal Reserve for slowing the economy, calling on the central bank to lower interest rates.

“The economic numbers just came out. They’re very, very good. Our country’s doing unbelievably well economically,” he said upon departure from the White House for travel to the U.S.-Mexico border on April 5.

The Bureau of Labor Statistics (BLS) reported a gain of 20,000 jobs in February, well under the 100,000 the economy needs to keep up with population growth. Historically, however, a job growth number this low usually turns out to be a one-month fluke.

“This was a Goldilocks report, with a rebound in job growth to calm fears of an imminent recession, and wage growth that was solid enough without triggering inflationary concerns,” said Curt Long, chief economist at the National Association of Federally-Insured Credit Unions. “The Fed will be pleased, as it supports their present stance of holding firm on rates.”

Economists polled by Reuters had forecast payrolls increasing by 180,000 jobs last month. The pickup in job growth helped to boost U.S. stocks. The dollar rose marginally against a basket of currencies, while U.S. Treasury prices were mixed.

The unemployment rate remained at 3.8 percent in March, inching up for Hispanics after a record low in February and decreasing further for Blacks.

The number of Americans filing applications for unemployment benefits fell to a nearly half-century low in the week ending March 30—a sign that employers are holding onto their workers in a tight labor market.

The BLS only counts people as unemployed if they sought a job in the past four weeks. There are about five million more people who’d also like a job, but, for one reason or another, haven’t sought in more than four weeks.

The economy has been boosted by President Donald Trump’s pro-growth policies including cutting taxes and regulations and renegotiating the deal with Canada and Mexico.

The gross domestic product (GDP) grew at a rate of 2.6 percent during the October–December period, after a robust 3.4 percent growth pace in the third quarter. The fourth-to-fourth quarter GDP increased by 3.1 percent, the best since 2005.

Trump on the Fed

Trump blamed the slowdown in the past six months mostly on the Federal Reserve’s raising of interest rates.

The Fed raised the rates four times in 2018 under Jerome Powell, whom the president picked two years ago to chair the bank, but has since repeatedly criticized for the rate hikes.

“I think they should drop rates and they should get rid of quantitative tightening—you would see a rocket ship,” Trump said.

On April 4, Trump said he plans to nominate his political ally, Herman Cain, the former head of Godfather’s Pizza, to one of two vacancies on the Fed’s seven-member Board of Governors.

Two weeks ago, Trump said he would nominate conservative economic commentator Stephen Moore to the other vacant seat on the Fed’s board. Moore is also a longtime Trump ally who has joined him in criticizing last year’s rate hikes.