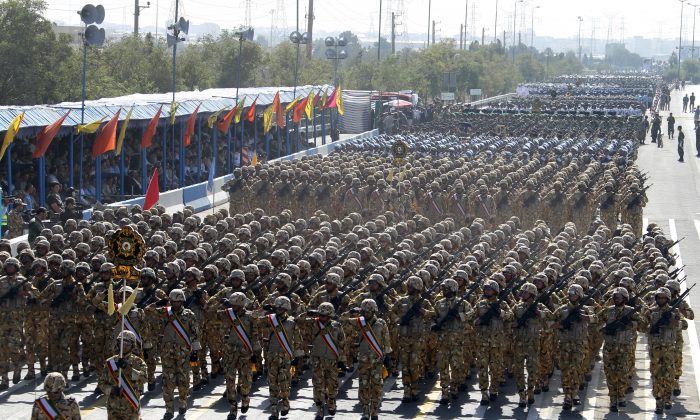 The Iranian army marches during an annual military parade which marks Iran's eight-year war with Iraq, in Tehran, on Sept. 21, 2012. (Atta Kenare/AFP/GettyImages)
Opinion

While Iran Receives Billions From Lifted Sanctions, the US Military Is Cut by Billions

There are many reasons to think that the Iran nuclear deal is an awful agreement—one of those being the $150 billion (or so) that Iran will receive as sanctions are lifted.

While Iran is receiving $150 billion, the U.S. military is struggling under cuts that total over $180 billion over the last four years.

In 2011, President Obama signed the Budget Control Act (BCA) into law which, was an attempt to rein in federal spending. While federal spending must be curtailed, unfortunately, the BCA did little to control the real drivers of federal spending (the entitlement programs) and instead imposed disproportionate cuts on the national security budget. These cuts were backed by a mechanism called sequestration, which automatically cuts every budget line if spending is too high.

In short, the BCA spending caps, sometimes referred to as sequestration spending levels, have cut spending on national security while our entitlement programs continue to grow recklessly. In fiscal year 2016, if the BCA caps remain in place, the base defense budget will be $95 billion in real terms below the pre-BCA defense budget.

The cumulative cuts over the last four years add up to over $180 billion without adjusting for inflation. If the cuts remain in place for this new fiscal year, the cumulative total will be over $230 billion. If you adjust for inflation, these defense budget cuts add up to $376 billion over five years.

At the same time, under the Iran nuclear deal, the Iranian regime is receiving hundreds of billions of dollars. This is money that was held in non-Iranian banks and not accessible by the Iranian regime due to U.S. and international sanctions.

The exact amount is not clear, but the Obama administration has used the estimate of $150 billion. Meanwhile, Treasury Department officials have estimated this Iranian cash influx at $100-125 billion and believe that Iran will have only north of $50 billion to spend after the regime settles existing international debts. Whatever the exact amount of cash, the Iranian economy is also expected to revive, providing unknown additional revenues to the regime on top of the immediate cash infusion.

What exactly the Iranians will do with all of this cash is not clear, but it is likely that at least some of these funds will go into increased spending on the Iranian military and its proxies like Hezbollah.

The U.S. Navy will not have an aircraft carrier in the Middle East this fall for the first time in years, the U.S. Army is cutting 40,000 soldiers, and the Air Force is proposing cutting whole fleets of aircraft—all for budgetary reasons.

Of course, the United States spends more on defense than Iran does (although Iran isn’t exactly transparent on what it spends), but the U.S. military is not just worried about the threats coming from Iran. Russia has invaded Ukraine and is flexing its muscles elsewhere. China is building islands and gutting our computer networks. North Korea shows signs of another space launch or perhaps a nuclear test. And Islamic terrorism is still a grave threat to the United States. So the United States has much more to worry about than just Iran, even as Iran receives billions in cash.

The Budget Control Act and sequestration aren’t cutting the budgets of our adversaries and threats.

While Iran receives billions in cash, our military budget is being cut by billions. Congress failed to stop the Iran deal, and so stopping the cash infusion into Iran is unlikely. At a minimum, Congress must act to increase the defense budget so that our military can protect us from rising threats in Iran and elsewhere.

Justin T. Johnson specializes in defense budgets and policies for The Heritage Foundation’s Allison Center for National Security and Foreign Policy. Copyright The Daily Signal. This article was previously published on DailySignal.com