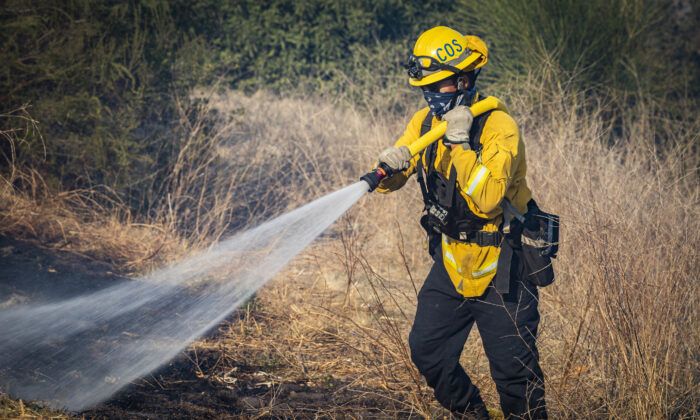 While California Dries Out and Burns, Bureaucrats Hype Diversity

A few months ago, a friend of mine in the water business participated in a lunchtime seminar in Sacramento on the topic of how to increase diversity in the water industry. As a civil engineer, he thought the discussion would focus on how to develop diverse sources of water in a drought stricken state. Instead, as he later related to me with refreshing clarity, “the whole event was about how to get rid of white men.”

The man who hosted the event was Wade Crowfoot, California’s Secretary for Natural Resources, who enjoyed media adulation in 2020 when he reportedly challenged President Trump on the science of climate change. Trump, who was being briefed by California state officials on the wildfires ravaging the state that summer, had said, “It’ll just start getting cooler, you just watch.” Crowfoot responded, “I wish science agreed with you.”

When it comes to who’s running California, there’s nothing unique about Wade Crowfoot. In California, reducing the percentage of white men in any position of responsibility and hyping the “climate emergency” are behavioral prerequisites for any ambitious public servant. But to hear these themes parroted endlessly can be quite frustrating, since it deflects attention away from poor job performance.

Crowfoot’s portfolio includes management of California’s forests, which have suffered catastrophic fires in recent years. But the reason these fires have burned with such unprecedented ferocity is not primarily due to heat waves and drought, but due to appalling mismanagement, for which we have hostile bureaucrats and environmental extremists to thank.

Over the past century, at a cumulative cost in today’s dollars that by now probably exceeds $100 billion, Californians have become very good at suppressing natural fires. Up until the 1990s, the resultant buildup of tinder was manageable, because property owners could still do controlled burns, graze cattle, and thin undergrowth, while the timber industry removed up to 6 billion board feet per year (pdf). Today, to burn, graze, or thin either requires preposterously complex, expensive and protracted permitting, or is simply impossible. And today, thanks to relentless harassment and overregulation, California’s timber industry harvest has been cut to less than 1.5 billion board feet a year.

That’s why the forests are burning like hell, Mr. Crowfoot. Once you’ve allowed them to get this overcrowded, they’d burn even if we weren’t having heat waves, or enduring another drought. The tree density in much of the state is more than five times what is historically normal. These desperately overcrowded trees absorb all the moisture from rain, reducing badly needed runoff into streams and reservoirs, but it still isn’t enough because there are too many of them. If California’s forests aren’t properly managed, soon, these fires will eventually destroy them all. As it is, every year California’s super-fires foul the air with more CO2 and soot than millions of electric cars could ever offset, and the streams are choked with ash and eroded soil from every scorched and ruined mountainside.

And as this tragic destruction of the environment continues, California’s politicians and bureaucrats talk about banning electric cars and purging their agencies of as many white men as they can. But we just want them to do their job.

They’re not. Crowfoot, along with Newsom and other public sector notables, recently announced a new Water Supply Strategy (pdf). It included completing the proposed Sites project, a badly needed off-stream reservoir that could store 1.5 million acre feet of storm runoff. Some environmentalist opponents of Sites even had the nerve to argue it isn’t economically feasible, after it was environmentalists who saw to it that 50 percent of the annual income from such investment projects (pdf) has to be used for “ecosystem improvements.” Hard to pay off an investment when you can only sell 50 percent of its output!

But more to the point, as soon as Crowfoot and Newsom announced a plan that included finally building the Sites Reservoir, the environmentalist bureaucrats and activists pounced, attacking the reservoir with the full complicity of a captive media. Because the plan also included expanding the Pacheco Reservoir, that, too, has attracted intensified opposition.

If environmentalists always had the power they have now, California as we know it would not exist. Hardly anyone would be able to live here.

So why don’t Crowfoot and Newsom immediately and publicly stand up to these environmentalist zealots, who have done as much to harm California’s environment as they have done to help it, and who have stopped water infrastructure development in its tracks for nearly fifty years? Why don’t they call them out unequivocally, and tell them, flat out, “you are destroying our civilization and you must back off.”

Instead, they go through the motions of their jobs, occasionally saying words that need to be said, but never seriously challenging a process that has become paralyzed by institutionalized green extremism. Get them started on diversity or the climate emergency, on the other hand, and they enter a safe comfort zone where they can drone from dawn till midnight, day after day, forever, and everyone that matters will nod approvingly.

To be clear: There is nothing wrong with seeing value in having a diverse assortment of ethnicities represented in leadership positions in the state bureaucracy. But if bureaucrats like Wade Crowfoot want to move closer to proportional representation by ethnicity in state agencies, they might start by renouncing the teachers union. This leftist political machine, exercising all but absolute control over public education in California, suffers from the same malady as Crowfoot’s natural resources agency. Instead of teaching math and English language fundamentals so graduates are qualified to compete for jobs based on their competence instead of their color, they focus on indoctrinating students to view themselves as victims of the white heteropatriarchy.

Similarly, if the bureaucrats controlling California’s regulatory agencies want to save the forests, instead of focusing on how many electric cars are sold, or working so hard to depopulate their agencies of white men, they might bring back responsible logging and streamline permits for mechanical thinning, controlled burns, and grazing to reduce tinder. If they want to save civilization, instead of bloviating endlessly about the climate emergency, they might do more than announce a new water supply strategy, they might actually finish new, major water supply infrastructure projects.