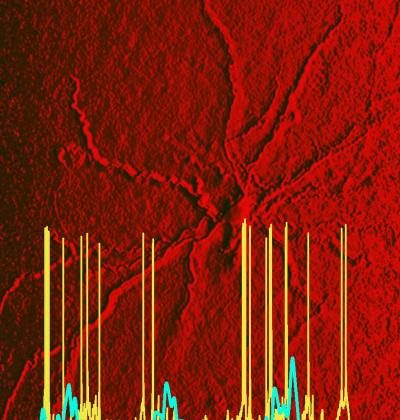 In the background is an entorhinal cortex neuron that was studied. The blue-green trace shows neocortical slow oscillation while the yellow trace shows the persistent activity of entorhinal cortical neuron, even when the inputs from neocortex were silent. (Mayank Mehta)
Science

Lack of sleep adversely affects learning and memory, and people with Alzheimer’s disease have impaired sleep.

Alzheimer’s starts in the entorhinal cortex, and a new international study has revealed that this part of the brain plays an important role in memory formation.

Working with mice, the scientists measured neuron activity in three brain regions: the neocortex, hippocampus, and the entorhinal cortex, which connects the others.

Cortico-hippocampal interactions are thought to be involved in working memory, such as short-term recall of a phone number, and memory consolidation during sleep. The team used mathematical analysis to understand the complex interplay between the three regions.

“The big surprise here is that this kind of persistent activity is happening during sleep, pretty much all the time,” said study senior author Mayank R. Mehta, at the University of California-Los Angeles (UCLA), in a press release.

The outer part of the entorhinal cortex showed the same activity as the neocortex, but the inner neurons remained active when the neocortex became inactive, as if remembering recent information from the neocortex.

“During sleep the three parts of the brain are talking to each other in a very complex way,” Mehte said.

“The entorhinal neurons showed persistent activity, behaving as if they were remembering something even under anesthesia when the mice could not feel or smell or hear anything.”

This process may help clear out memories and remove irrelevant information processed during the day, the researchers said.

The findings were published online in Nature Neuroscience on Oct. 7.