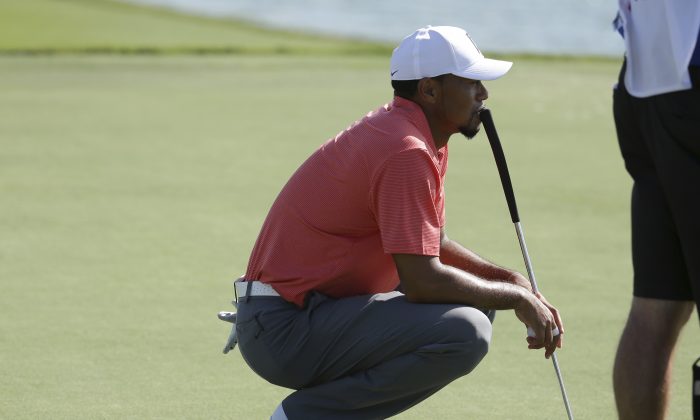 Tiger Woods waits to putt on the 17th green during the Pro-Am at the Hero World Challenge golf tournament, in Nassau, Bahamas. (AP Photo/Lynne Sladky)
Golf

Which Woods Shows Up This Week? Tiger Paws or Pause

NEW YORK, NY—Given all the starts and stops it is likely Tiger Woods will return to formal competition with this play this week at the Hero World Challenge in the Bahamas. Woods has not played since a 10th place tie finish at the August ’15 Wyndham Championship event in Greensboro, NC. That makes 16 months away from competition against the finest players in the game.

What can one expect?

No one can say with any certainty. Woods has had a range of issues with his body over the last number of years and initially he said he was “hopeful” to play in the PGA Tour’s Safeway event this past October followed by an appearance in the Turkish Airlines Open. Just prior to the start of the Safeway event — Woods said the state of his game was “vulnerable” and he pulled out — much to the consternation of tournament organizers. His long time agent — Mark Steinberg — was quick to add Tiger’s pullout was not related to any physical issues.

The Hero World Challenge is a four-round, 72-hole stroke play event with a $3.5 million purse, a $1 million winner’s prize and Official World Golf Ranking points awarded. It will be held at the challenging par-72, 7,302-yard Albany course for the second consecutive year.

“I am excited to make my return at the Hero World Challenge at Albany and play in this terrific tournament,” Woods said. “This is our 18th year, and every year we put together a top field that showcases the best golfers from the previous season. Albany is an outstanding setting, and I can’t thank Hero MotoCorp enough for their support of the tournament and my foundation.”

Woods has won his own event five times — the last time he played the event was in 2014.

The inability — or unwillingness — for Woods to say definitively when he would return to competition has only caused many to seriously wonder is Tiger really committed to doing what’s needed for him to show clear signs he can be competitive at the highest of levels.

Woods turns 41 at the end of this month and in the history of golf only a very small number of players have been able to sustain their play from earlier peak years. Tiger’s last major came in June of ’08 at Torrey Pines during an epic US Open playoff win over Rocco Mediate. His last PGA Tour victory came in August ’13 at the WGC Bridgestone Invitational at Firestone. For those players under the age of 30 — Tiger’s imprints within golf are viewed only through past television clips — not from actually seeing him do likewise against them.

Complicating matters for Woods beyond the physical issues — is the mental dimension. How much sustained passion does he have in playing at the highest of levels? How much can his body handle? Tiger also has two young children and he has strongly indicated a desire to be present at crucial moments in their developing lives.

Unlike in past times when injuries derailed Woods from playing — the continuous back and forth of when Tiger will be has caused a predictable weariness among media, his fan base and general observers. So much has happened in professional golf since Woods left the scene that the belief that Tiger may more likely retire than play onward has gained considerable traction.

For a record eleven time PGA Player-of-the-Year award winner to struggle in making cuts in regular events may simply cause Tiger to pause and come to the conclusion his best days are clearly behind him. Having to show a form of play that is nothing more than mediocre may prove to be a tipping point for him to permanently retire. Others within golf have faced a similar fate — the most noted being the recently passed Arnold Palmer who won his fourth Masters in 1964 at age 35 and would never again win another major championship. The same happened to the famed Spanish champion Seve Ballesteros — winning his 3rd Open Championship in ’88 with a sensational final round 65. After reclaiming the number one ranked position in the world — the then 31-year-old would never again taste major championship success.

The path for Tiger will likely be his hardest road ever encountered. Staying the course — no pun intended — will be hard. If he fails to demonstrate a competitive game in his first return to top tier competition — there will be growing mumbles that Woods would be better served to pack his clubs and put them in final storage. How will Woods respond to being back in the fish bowl and absent for quite some. How much of a playing schedule will Tiger schedule in ’16 and can he be able to show the wherewithal to demonstrate the capacity to play frequently and with vigor — especially in frequent rounds and intense practice sessions.

The paws Tiger showed during his finest days were clear to all. Tiger did not win — he mauled those standing between him and victory. No golfer – in recent memory — has shown an insatiable desire to win and win convincingly. So what will we all see this week? Pause or paws? The time for speculation now ends — put the tee in the ground and play away. Does the Tiger stalk or be stalked? We shall soon see.