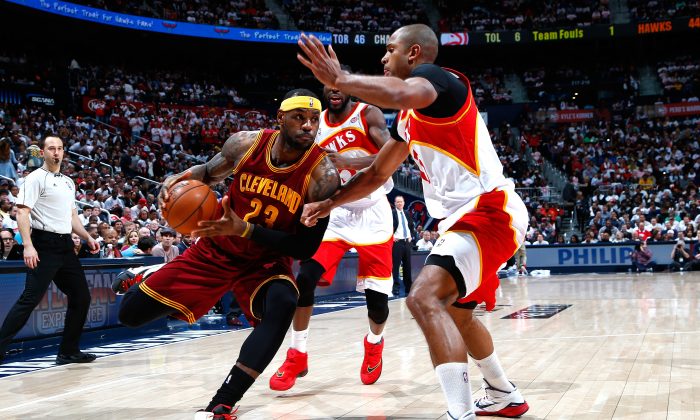 Will the Hawks and Cavaliers meet in the Eastern Conference finals, or will one or both be taken down before then? (Photo by Kevin C. Cox/Getty Images)
NBA

Which Teams Can Beat the Hawks and Cavaliers in 2015 NBA Playoffs?

The conventional take on the Eastern Conference playoff picture, bolstered by the struggles of everyone below them, is that the Atlanta Hawks and Cleveland Cavaliers are the favorites to make the conference finals.

A critical caveat exists, though. The Hawks have been dominant most of the season, and the Cavaliers have been explosive since the trades and the return of LeBron James, but both teams suffer from a lack of playoff experience.

James has plenty, but his fellow starters have little. Kevin Love and Kyrie Irving have never played in a playoff game. Timofey Mozgov has played in one series, which he lost. J.R. Smith has made the playoffs seven years running but has won only three series.

The Atlanta Hawks are a little better off overall, but they still don’t have a proven postseason winner that has even tasted the NBA finals let alone winning a championship. (Austin Daye doesn’t count.) Out of the starting lineup, only Kyle Korver has made it past the second round.

Yes, LeBron has won two championships and made the finals the last four seasons. David Blatt loves to trumpet his international pedigree and won’t shy from big games. Irving has delivered under pressure before, and the Cavs look unstoppable right now. Hawks coach Mike Budenholzer was assistant coach on the Spurs while they won four championships, and the starters have all been to the playoffs multiple times.

The introduction was just to point out that the Hawks and Cavs aren’t automatically guaranteed entry into the conference finals. (In this scenario, many assume the Cavs win the series.) Every other team in the East has struggled in significant parts of the season, but things can easily change come playoff time.

Playoff positioning has been shifting almost every day and will keep doing so for the next couple of weeks. Both the Hawks and Cavs could face the following teams in the first round: the Milwaukee Bucks, Miami Heat, Charlotte Hornets, Boston Celtics, Indiana Pacers, and Brooklyn Nets.

Out of those six teams, there are definitely a few that have a solid chance to knock off Atlanta or Cleveland.

The two teams that neither the Hawks nor the Cavs want to see in the first round are the Pacers and Heat.

Both teams have had rough seasons, in large part due to injuries. Indiana has been missing Paul George all season, and all of the other starters have missed time. In a sign that the Pacers are still dangerous, the team boasts a 16–10 record since starting point guard George Hill returned on Jan. 23. That stretch has included two wins over the Cavs.

Miami nailed a nice trade for Goran Dragic during the All-Star break only to find out hours later that Chris Bosh will miss the rest of the season, and others including Dwyane Wade have missed games due to injury. But primarily due to Wade’s resurgence leading into the playoffs, as well as Hassan Whiteside, the Heat have emerged as a serious potential opponent for anyone in the East.

The Pacers and Heat both have plenty of playoff experience. Indiana has reached the conference finals in the last two seasons, trumping the Hawks in the first round of both, but ultimately losing to the LeBron-led Heat. Miami with James was dominant and key players remain, including Wade, Mario Chalmers, and Chris Andersen.

The Cavaliers have the most to fear from the Heat, which have a 2–1 head-to-head record with them so far this season, including a 106–92 beatdown on March 16. But the Pacers also have a lot of motivation to take down James after the last two seasons, and they will receive a huge boost if Paul George does indeed return to play and can provide them with lockdown defense on LeBron if not some offensive output as well.

Atlanta does not want to see the Pacers in the first round. They’ve beaten Indiana three times this season, but the playoff losses loom large. Out of the six opponents, Indiana has the best chance to take the Hawks out early.

Another team Atlanta would like to avoid—the Nets. Brooklyn presents a compelling story considering the team has to swap picks with Atlanta, part of the Joe Johnson trade. Brooklyn also has enough savvy to put together a solid series, despite being one of the most inconsistent teams in the league, led by Johnson and Brook Lopez. A Nets–Cavs series would also be interesting, with Thaddeus Young likely drawing the LeBron assignment.

The other three teams do not represent much of a threat to either team. The Hornets are simply too limited on offense to make much noise, the Celtics are too young to swing an upset this season, and the Bucks aren’t the same since the Brandon Knight trade (and are also inexperienced).

Let’s say the Hawks and Cavs do make it to the second round of the playoffs. More interesting matchups await.

Each of the other three potential opponents—the Toronto Raptors, Chicago Bulls, and Washington Wizards—present different looks for the two top teams in the East.

The most important factor here is injuries, principally Derrick Rose. He never regained form this season when healthy, but even where he was is a ton better than Aaron Brooks or Kirk Hinrich. Jimmy Butler and Taj Gibson are also coming off injuries, and Pau Gasol could be worn down by the time the playoffs hit, with the heavy minutes he’s been playing.

The Bulls are just 8–9 since the All-Star break, after starting 34–20. They’re putting up just 96.5 points a game since the break, compared to 102.2 prior. Chicago could definitely take down either the Hawks or Cavaliers but probably won’t.

Toronto is perhaps the least threatening of the middle tier of the conference. The Raps have played good basketball over most of the season but just don’t strike fear in anybody, partly because the franchise hasn’t won a playoff series since 2001, the longest drought in the entire league. On the other hand, the Raptors have the lead in the season series with the Hawks at 2–1. Toronto has gone 6–11 since the All-Star break, after starting 36–17. Their offense has particularly regressed, averaging 100.4 points per game since the break from 105.6 points prior.

Washington poses a potential problem for both the Hawks and the Cavs. The Wizards were able to surprise the Bulls last season, and could easily beat Chicago in the first round again. They nearly knocked off Indiana but ultimately fell short. On top of the strong core, the Wizards added Paul Pierce in the offseason. Pierce is a huge playoff rival of LeBron’s, and has stepped up in big moments his entire career.

The Wizards—much like Chicago and Toronto—have been very inconsistent, especially after the All-Star break (going 7–9), and it’s hard to predict which version of the team will come out during the playoffs, in a series overall and even in each game. The good version of Washington—which recently beat the Grizzlies, Trail Blazers, and Jazz—could beat Atlanta or Cleveland.

Overall, though, Indiana poses a bigger threat to both teams, and Miami to the Hawks, than any of these three mid-tier teams. But the Cavs do not want to face the Wizards, and the Hawks should prefer to face Washington over the other potential foes.