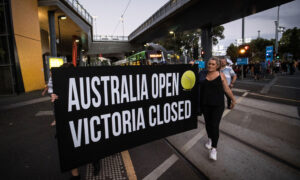 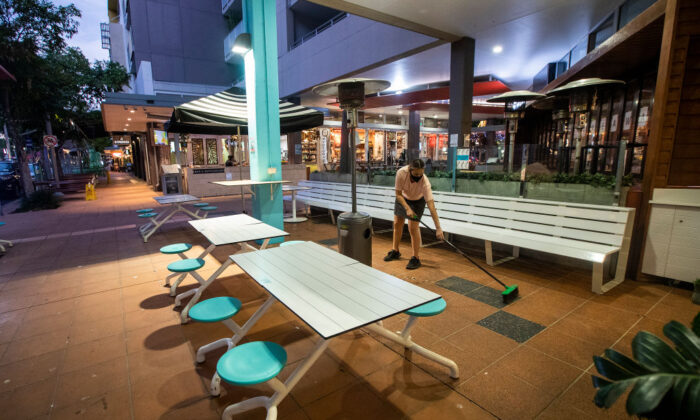 Workers pack up at a cafe in Brisbane, Australia on June 29, 2021. (Jono Searle/Getty Images)
Viewpoints

Where’s the Justice in Repeated Lockdowns?

In Charles Dickens’ novel, Oliver Twist, we find the oft-quoted phrase: the law is an ass.

In his view, the law no longer served the purpose of promoting justice and fairness but became corrupted by arbitrariness so that it served the interests of the few and not the many.

In other words, what is deemed legal may not always be lawful. Indeed, it may be immoral.

I could list many instances over the last year and a half where some of us have been more equal than others or where laws have been arbitrarily applied, leading to unjust and tragic outcomes.

Take, for example Victoria’s Chief Health Officer Brett Sutton travelling to Canberra for the annual dinner of the National Health and Medical Research Council—while Melburnians were prohibited from travelling more than 25km from home and couldn’t leave the state other than for work reasons.

What about Mark and Anneli Kilian, who flew from Los Angeles to Sydney to see Mark’s 80-year-old father, an Australian citizen, who is dying of cancer in Queensland? Only after several requests, followed by a public outcry, were they granted an exemption to leave hotel quarantine.

Many politicians or health bureaucrats have been slow to produce evidence of the benefits of repeated lockdowns and border closures, especially when the number of COVID-19 related deaths in Australia this year is, wait for it, zero.

Add to this the secrecy about the science. The Morrison government has refused to release the Treasury department’s assessment of the costs of measures such as border closures, lockdowns, and schools being shut.

On this point, one of Australia’s foremost economists, Saul Eslake, wrote recently in the Australian Financial Review that it is “outrageous that the government won’t share with the public any of the basis for the decisions it has made”.

Professor Peter Swan of University of New South Wales is almost certainly correct in his assessment of what the government is hiding: “It would seem highly likely that the government has ignored advice from Treasury and elsewhere that [the] lockdown is almost entirely unproductive and ineffective, as well as being economically crippling.”

Furthermore, research released just this month by the National Bureau of Economic Research in the United States confirms, after an examination of data from all U.S. states plus 43 countries around the world, that there is no evidence of the foretold impact of lockdowns on reducing excess deaths, but there is evidence of excess overall deaths rising in the weeks following the inception of lockdowns.

In his most recent book, Enduring Ideas, Professor Gabriël Moens argues that there are instances of governmental arbitrariness which can be remedied only by means of civil disobedience, especially when some groups have entrenched power positions in society and use their power to impose their will on weaker and vulnerable classes of people.

In such circumstances, civil disobedience may be protected by Articles 18 and 19 of the International Covenant on Civil and Political Rights, particularly when the opportunities for change that are provided by the legal system are deficient.

This is an issue for Australians who uphold the noble ideal of respect for the rule of law.

The problem is how do we respect bad laws, when we should question their validity? Do we do enough to scrutinise the emergency powers our parliaments confer on ministers and public health officials, particularly when their justification is difficult to quantify?

To be clear I am not advocating any form of lawbreaking.

However, with a federal election due in the next year, we need to let our parliamentarians know if we Australians think differently about how they are running the country.

Let’s not forget that both major parties are on a unity ticket when it comes to public health orders. In each state, the Public Health Acts pursuant to which these orders are made—with all their side-effects—were passed with bipartisan support.

“We need constantly to remind ourselves that democracy can produce tyranny just as readily as any other system of government unless the individual democrat has learned to attach supreme importance to individual freedom.”

Rocco Loiacono is a senior lecturer at Curtin University Law School in Perth, Australia, and is a translator from Italian to English. His work on translation, linguistics, and law have been widely published in peer-reviewed journals.