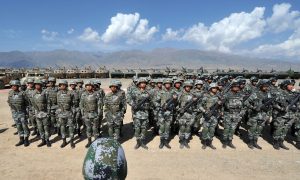 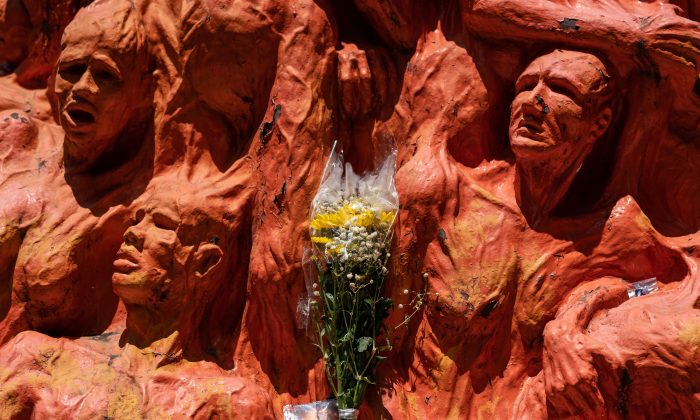 Flowers are placed in front of the 'Pillar of Shame' statue, an art piece dedicated to the victims of the 1989 Beijing Tiananmen Square massacre, at the University of Hong Kong in Hong Kong, China, on June 4, 2019. (Anthony Kwan/Getty Images)
Thinking About China

Where Were Chinese Immigrants on 30th Anniversary of Tiananmen Square Massacre?

This year marked the 30th anniversary of the Tiananmen Square Massacre. Beginning the weekend prior, various commemorative events took place in many cities worldwide and peaked on June 4.

The largest memorial gathering, with more than 180,000 participants, occurred in Hong Kong, the only place in China where such commemorations can be safely held.

However, browsing the photos from the commemorative events, one can see that—excluding Hong Kong—the scale of these events was relatively small, without much engagement from the overseas Chinese community. This was so, even in cities with large Chinese immigrant populations, such as New York, San Francisco, and Los Angeles.

At the public rally held on Capitol Hill on June 4, the supporting crowd was merely in the hundreds, and maybe only half of them were Chinese immigrants and dissidents.

In 1992, the Chinese Student Protection Act (CSPA) was approved by the U.S. Congress and signed into law. This CSPA established permanent residency for Chinese nationals that came to the United States from June 5, 1989, to April 11, 1990. The measure was focused toward Chinese students, especially those who were in the United States during the time of the protests and participated in media interviews and demonstrations.

So, where were those Chinese immigrants when the commemorative events for the Tiananmen Square Massacre took place?

Undoubtedly, the beneficiaries of the CSPA still remember the Tiananmen Square Massacre, as nobody could forget an event that changed their lives and the path of their home country. The overwhelming majority of these green card holders probably have become naturalized U.S. citizens and have established families. Do they share their knowledge and experience about the massacre, and the 1989 democracy movement with their offspring?

These days, if the June 4 democracy movement is brought up in a conversation with Chinese immigrants, you frequently encounter the response, “We don’t want to get involved in politics.” So, what happened? Why do Chinese people think this way?

In the aftermath of the Tiananmen Square Massacre, the Chinese communist regime began systematically carrying out a yearslong re-education campaign meant to transform the Chinese people’s understanding of the 1989 democracy movement. People who had direct experience of the movement were forced to write statements to toe the party line that the suppression of the demonstration was good for the stability of China.

Many people who didn’t have direct knowledge could gradually buy into the Chinese regime’s view, after watching hours of propaganda on state-run media. They might agree that it’s right to criticize the student movement for threatening the stability of China or being too aggressive by trying to attain democracy in a single campaign. Meanwhile, the blood stains on Tiananmen Square and ChangAn Street have been washed away and faded in many people’s hearts and minds.

For the younger generation in China, a complete taboo on the events of June 4 in the media, and even in their homes, may leave them without access to the truth. In the past three decades since the Tiananmen massacre, the Chinese communist regime has been successful in creating a generation gap, or amnesia, about the violent crackdown inside China.

For many overseas Chinese immigrants, the personal price of discussion of such “sensitive” issues is still very high. When they see that many pro-democracy movement leaders have been forced into exile, banned from returning to China even to attend family funerals, choosing self-censorship seems a pragmatic approach. Many of them still have family or business ties in mainland China and need to go back to China to visit friends, relatives, or business partners. However, the Chinese regime has years of experience at pulling strings to control these immigrants.

Therefore, asking these Chinese immigrants in the United States to join public events that the Chinese regime doesn’t like may be a vain wish. It is more practical to ask: Are they still grateful for the sacrifice by those brave souls in the Tiananmen Square, and for the support by the U.S. government for a peaceful life in a free society?

Or do some of them even follow Deng Xiaoping’s doctrine—“Kill 200,000 people in exchange for 20 years’ stability”—and claim that they would also do the same thing if they were the Chinese regime leaders?

At the Shangri-La Dialogue security summit in Singapore, Chinese Defense Minister Gen. Wei Fenghe said on June 2, 2019, that the bloody crackdown on protesters around Beijing’s Tiananmen Square 30 years ago was the “correct” decision, citing the country’s “stability” since then. This might appear to be a shameless statement to the Western world, but do we know how many Chinese immigrants believe this Chinese Communist Party (CCP) rhetoric?

The power of long-term brainwashing may never be underestimated. Even for Chinese immigrants in the United States, they are still subjected to brainwashing by the CCP.

According to a report from the Hoover Institution in 2018: “In the American media, China has all but eliminated the plethora of independent Chinese-language media outlets that once served Chinese American communities. It has co-opted existing Chinese-language outlets and established its own new outlets.”

None of the Chinese pro-democracy organizations in the United States owns a TV station, radio station, or newspaper, while the Chinese regime’s official media or sponsored media can freely spread its propaganda on U.S. cable, satellite, airwave, streaming service, and print platforms. How then can pro-democracy groups effectively and consistently deliver the truth of the 1989 democracy movements to overseas Chinese immigrants?

Indeed, the U.S. government and Chinese pro-democracy groups have completely failed in deterring the CCP’s disinformation and propaganda in the United States.

The United States has opened its media market to the Chinese communist regime, which has rejected the entry of U.S. media into Chinese society. How many Chinese immigrants will read the statement about the 30th anniversary of June 4 from Secretary of State Mike Pompeo? And how many of them will sit on a sofa at home and watch the Chinese regime’s TV propaganda, streaming from China and praising suppression versus political turmoil in Beijing?

Phoenix TV, a Hong Kong-version of Chinese state-run media, even bought (through a shell company in the United States) a powerful radio station (AM690) in Mexico, along the border with California to broadcast 24/7 pro-CCP programming into almost the whole of southern California. This is not just a reciprocal trade issue, but a national security issue.

Through decades of political crackdowns, the CCP has instilled deep fear in Chinese peoples’ hearts, so they know very well to compromise in order to avoid harsh retribution from the government. Meanwhile, the Chinese people are also afraid of living in a chaotic situation again, so that they easily buy the official theory that what was done in Tiananmen is for the stability of the country.

But when Chinese immigrants, who live in the land of freedom and enjoy the benefits of a democratic society, still can’t break away from fear and continue to be victims of CCP propaganda, then we have been defeated by the party’s propaganda war.

U.S. government and human rights organizations should all take action to create channels and platforms to systematically deliver more truth to Chinese communities, whether inside or outside China: the truth of the Tiananmen Massacre, the truth of full-blown religious persecution in China, the truth of the Chinese economy, and the true, evil nature of the CCP.