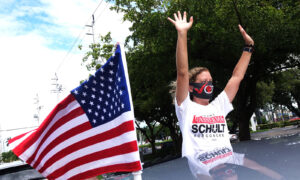 ‘Where Was He?’ Clinton Blasted for Questioning Sanders’ Healthcare Record When Picture Emerges of Him Standing Behind Her During Speech

In her latest gaffe, Hillary Clinton questioned where Bernie Sanders was in 1993 and 1994 when the healthcare battle was raging only to find that—at one momentous point—he was standing right behind her.

A picture shared by a Sanders spokesman showed the Democratic candidate standing right behind Clinton during a speech she was giving on healthcare at Dartmouth College.

The photo emerged after Clinton, during the latest debate, wondered: “Where was he when I was trying to get health care in ’93 and ’94?”

Clinton’s campaign tried to sound sharp after the picture surfaced, with a spokeswoman telling the New York Times: “Exactly, he was standing behind her. She was out in front.”

But things got worse when it was revealed that Clinton, the then-First Lady, wrote Sanders a handwritten note in ’93 thanking him for his work in trying to get all Americans healthcare.

“To Bernie Sanders with thanks for your commitment to real health care access for all Americans and best wishes — Hillary Rodham Clinton 1993,” reads the note, which was also shared by Sanders’ campaign.

An accompanying photo shows the pair in a deep discussion back then.