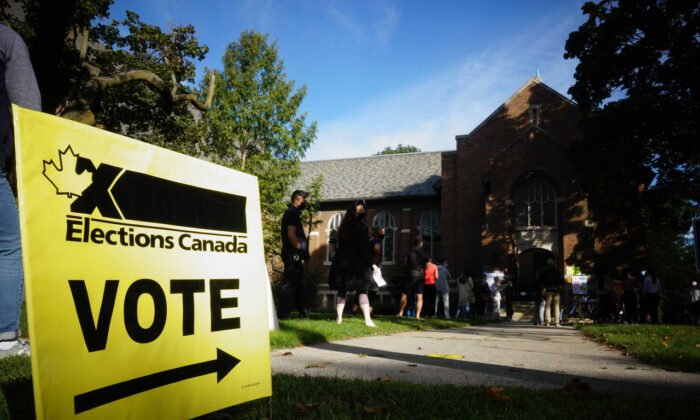 People start to line up early for the Canadian general election before polls open in west-end Toronto on Sept. 20, 2021. (The Canadian Press/Graeme Roy)
Canada

Where the Party Leaders Are on Election Day

As Canadians head to the polling stations on Sept. 20, here’s a look at where the main party leaders will be and what their plans are for election day.

Trudeau will cast his ballot on the morning of Sept. 20 in his Montreal riding of Papineau, Que. The Liberals will kick off their election night event at 5 p.m. EST.

O’Toole is in Durham, Ont., today, starting at the Garnet B. Rickard Recreation Complex in Bowmanville, Ont., then moving on to Oshawa, Ont., to make an address at the Tribute Communities Centre after the polls close.

O’Toole cast his ballot this morning in Oshawa.

Singh is in British Columbia today, where he will be visiting various campaign centres to thank volunteers. He will be at the Vancouver Convention Centre this evening to respond to the election results.

Bernier will join supporters at the Saskatoon Inn in Saskatoon, Saskatchewan for election night.

Bernier said on Twitter on the morning of Sept. 20 that “I have the feeling this is going to be a good day,” highlighting the number of followers he has on social media.

Paul, who campaigned in B.C. and Atlantic Canada over the past week, was back in Toronto on Sept. 19, where she is hoping to win a seat in her own riding of Toronto Centre, currently held by Liberal candidate Marci Ien.

Paul posted on Twitter on Sept. 20 that she would be making calls to voters in Toronto Centre today to make sure “everyone gets out to vote.”