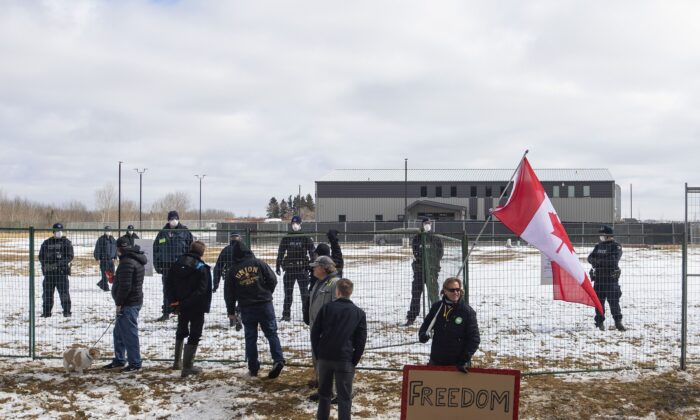 Supporters gather outside GraceLife Church near Edmonton on April 11, 2021, after the church was fenced off by police and Alberta Health Services for violating COVID-19 restrictions. (The Canadian Press/Jason Franson)
Canada

Where the Constitution Fits In Amid Pandemic Mandates

The restrictions on worship and assembly during the pandemic, followed more recently by the potential denial of employment for unvaccinated people, have left some Canadians wondering how such things could take place given Canada’s Charter of Rights and Freedoms.

Ironically, the Charter’s guarantee of such rights in Section 1 also includes the loophole that can suspend them. “The Canadian Charter of Rights and Freedoms guarantees the rights and freedoms set out in it subject only to such reasonable limits prescribed by law as can be demonstrably justified in a free and democratic society,” it reads.

The “fundamental freedoms” outlined in Section 2 of the Charter include “(a) freedom of conscience and religion; (b) freedom of thought, belief, opinion and expression, including freedom of the press and other media of communication; (c) freedom of peaceful assembly; and (d) freedom of association.” Yet, public health orders, the censorship of doctors and media that contest the COVID-19 narrative, and increasing coercion to receive a COVID-19 vaccine suggest that these freedoms are not so fundamental to those in authority.

The Justice Centre for Constitutional Freedoms has tried to challenge the constitutionality of these public health orders but has had limited success. In one example, following a legal challenge by the Justice Centre, Chief Justice Christopher Hinkson of the Supreme Court of British Columbia struck down that province’s ban on outdoor protests, yet refused to do the same on the prohibition of in-person religious gatherings.

Author and academic William Gairdner dedicated a chapter of his book “The Trouble With Canada … Still” to explaining why then-prime minister Pierre Trudeau’s 1982 Charter of Rights ran contrary to the common-law tradition that Canada inherited. Gairdner told The Epoch Times that this facilitated a “juridical war for control over the moral and ideological nature of our union.”

“You can say the country … got converted, mostly by judges of the same persuasion: very progressive, very modern liberal as opposed to classical liberal,” said Gairdner, who is also an Epoch Times contributor.

“So they have remade the country, and that’s what Pierre Trudeau wanted. He thought that the law should come from intelligent judges who understand the legal principles, and not from common law and the doings of the ordinary people who go to court to insist on their rights.”

“Medical care is supposed to be a provincial right—it still says so in our BNA [British North America] Act. But the Charter of Rights and Freedoms came along and the federal government got interested in equalizing social benefits and medical benefits for every Canadian,” he said.

“Ottawa used its taxing power to increase its income, which it then distributed to the provinces as long as they came to heel [under the Canada Health Act].”

In Gairdner’s view, the pandemic presents a unique challenge for which there may not be an easy answer.

“The old John Stuart Mill principle of do whatever you want as long as you don’t harm someone else doesn’t work now with respect to this problem, because you don’t know if you have the virus and no one else knows whether you have it either,” he said.

“All pandemics create this kind of defensive social and legal mood where you become wary of all human beings. And then if you get some kind of standard like a vaccine that they claim works—even if in the end it doesn’t, and even if it creates some death and some difficulties in the people who take it—you start bringing the police into action and making pariahs out of people who, on principle, don’t want to take it.”

What concerns Gairdner even more is that new norms and perceptions could keep freedoms restricted indefinitely for one public health reason or another.

“It throws the whole country into a moral quandary, because when are we going to stop shutting down society? When there’s one death? One per day? Or no deaths? … Are we going to close up when the next flu comes along, the ordinary flu? We never shut society down for that. Are we going to have to now because we’ve set a moral precedent? What are we going to do? Nobody’s asking these questions.”

Constitution Should Offer ‘Protection for People’

Salim Mansur, professor emeritus of political science at the University of Western Ontario, said the Constitution ought to provide helpful limits on government power.

When it comes to the issues of fundamental freedoms such as freedom of speech, worship, and association, people should be rising up, and the judiciary should be protecting their rights, Mansur says.