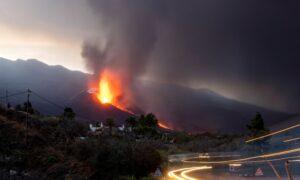 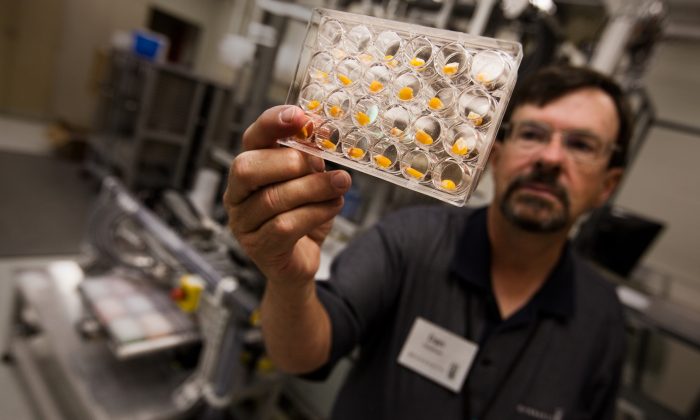 A technician holds up corn seeds that were scanned for their quality at the Monsanto agribusiness headquarters in St Louis in 2009. (Brent Stirton/Getty Images.)
Science

Where Science Ends and the GMO Debate Really Begins

Opponents and proponents of genetically modified food have invoked science in their arguments, but science has no definitive answer.

Evaluating the risks and benefits of genetically modified organisms (GMOs) cannot depend on science alone, at least for now.

For the past two years, the National Academies of Sciences, Engineering, and Medicine (NAS) worked on a report that was to become the most exhaustive analysis of the science on GMOs in agriculture.

The 400-page report, released earlier this year, covers everything from safety and regulation to policy and socio-economic issues. It is likely the best shot science has had thus far to clear the air on the issue of GM food. But will the report substantially impact the debate on GMOs?

“Not really,” said Jack Heinemann, professor of genetics at the University of Canterbury in New Zealand. “It will inform lots of discussions, but mainly so far, I see it being selectively quoted to support pre-existing positions.”

Heinemann has been labeled anti-GMO, despite being a genetic engineer.

Henry Miller, on the other hand, has been said to back the GMO industry. He’s a former Food and Drug Administration GMO drugs reviewer, now with the Hoover Institution think tank.

Heinemann and Miller agree on the impact of the NAS report.

“[The] impact will likely be minimal,” Miller said via email. “The report is hardly definitive in any way, and because of the extensive ‘on the one hand, on the other hand’ equivocation, various aspects of it will be used by different people and organizations to support their own positions.”

Both experts have a point. At least one trade association and one environmental group used the report to fortify positions they apparently held before.

The American Seed Trade Association released a statement saying the report’s findings “reinforce what we’ve known all along: GE crops are safe.” GE, or genetically engineered, is another term for organisms that have been altered on a genetic level.

Meanwhile, the Environmental Working Group stated the report took “a major policy step in calling on the food and agriculture industries to increase transparency regarding GMO foods.”

The issue of genetic modification in food has been mired in controversy since GM products hit the market in the early 1990s. Two camps formed, with environmentally oriented groups opposing the practice and the GMO industry promoting it.

Indeed, both camps have done so good a job with discrediting their opponents it seems there’s hardly any source of information left that hasn’t been labeled pro- or anti-GMO.

A day before the NAS report came out, a consumer advocacy nonprofit (itself labeled anti-GMO) released a report questioning the credibility of NAS.

The nonprofit, Food & Water Watch, listed GMO industry ties for 11 of the 20 members of the committee that authored the NAS report. Weeks later, Miller singled out another member of the committee for a “long history of anti-genetic engineering activism.”

Lost in the scrimmage lies the science on GMOs, called on to aid both sides, yet fully satisfying neither.

For example, GMWatch, an environmental organization labeled anti-GMO, accused the NAS report of “sandwich” composition, meaning it includes information critical of GM crops in the middle of the report, while keeping its opening statement and conclusion positive toward GMOs.

Yet the report seems adamant in avoiding clear-cut answers on broad topics, asserting that “sweeping statements about GE crops are problematic because issues related to them are multidimensional.”

While both proponents and opponents of GMO may lambast such statements as weak and vague, it may just reflect the fundamental difference between science and advocacy.

It’s important “for scientists to emphasize that uncertainty is central to science, and advocacy is disruptive of it,” said Stephen Benner, a biochemist who, among other things, helps NASA look for life on other planets, in a blog post titled “The Dangers of Advocacy in Science.” His observations were not about the science of GMOs in particular, but apply to science in general.

“When a scientist becomes an advocate, he loses for himself the power to use scientific discipline to discern reality,” he wrote.

The GMO debate mostly stems from values and beliefs, rather than science. And that’s unlikely to change.

The NAS report states that “there are limits to what can be known about the health effects of any food, whether non-GE or GE,” and, furthermore, that parts of the argument reach beyond food safety to cultural and social values, which elude scientific judgment completely.

“Very little of what we’re talking about is science,” said Heinemann.

Instead of science, we’re talking about technology and its integration in society, Heinemann said. He explained the difference: science doesn’t necessarily have to result in a product—something practical and marketable—but technology does. “The science is only one small part of it,” he said.

It is one thing when scientists’ genetic research stays in the laboratory, but it’s another when those discoveries are developed into products that industries then market to the public for profit.

An example of advocacy versus science is seen in the history of the tobacco industry. It took science decades to substantiate health claims against smoking.

While many detrimental health effects of smoking can be reversed by quitting, if GMOs turn out to have long-term negative impacts, they may not be so easily reversed.

Since the inception of GMOs, one of the main arguments against them is their potential irreversibility.

It has been documented that GM crops spread into the wild, breeding and passing down their modified genes. “The extent of the escape is unprecedented,” Cynthia Sagers, an ecologist at the University of Arkansas, told Nature in 2010.

Yet the NAS report concluded that research on GM plants’ spread into the wild has, so far, shown no problems for the environment. The report’s conclusion on GM food safety followed the same pattern.

The report’s authors stated that they “could not find persuasive evidence of adverse health effects directly attributable to consumption of GE foods.”

“This is not the same as saying that there is no evidence of potential health effects,” Heinemann noted, but to him, the NAS conclusion was “reassuring.”

However, the report acknowledged that there are no long-term studies on human consumption of GM food.

And even if scientists conduct long-term studies, the report notes that “isolating the effects of diet” on humans from all the other factors that can impact health is challenging. Also, tests on whether GMOs cause allergies “could miss some allergens,” the report states. The best science we have on GMOs remains open to identifying impacts we have not yet seen.

GMO proponents have long been saying that mere potential risks are not enough to stop technological progress that may bring revolutionary discoveries (for example, the promise of crops impervious to drought, pests, and anything that could thwart their growth, theoretically ending world hunger).

Critics, on the other hand, argue that most of the promised breakthroughs have not materialized and the possible progress is not worth the risks of irreversibly interfering with nature—and causing potential long-term effects on humans that cannot yet be discerned.

What Is an Acceptable Risk?

The report acknowledges it is not necessarily scientists who determine the level of risk a given population is willing to accept.

“What is acceptable is inherently a value-laden concept” that, in part, depends on “societal judgments,” it states.

Decisions to enforce labeling laws on GMOs, for example, are not entirely about the scientific studies showing effects one way or another, but about people evaluating the potential risks of GM over non-GM foods. GMO labeling is mandatory in the European Union and many other countries; the NAS report states that this is not based on science, but rather on the “right to know” rooted in the values of human rights.

The first mandatory GMO labelling law in the United States—in effect in Vermont since July 1 and now superseded by a new federal bill—stated GM food should be labelled in the state for “multiple health, personal, religious, and environmental reasons.”

On the other hand, Miller said that values and beliefs have nothing to do with it. He blamed opposition to GMO on the fear of the unknown, ignorance, and “black marketing” by the organic industry.

Yet in general, lack of knowledge is rarely why people consider things more (or less) risky, according to Lennart Sjöberg, a professor at the Center for Risk Research at Stockholm School of Economics.

“People are not that misinformed about all risks,” he wrote in a 1999 paper. He found that perception of risk did not vary much according to how much or little knowledge a person possessed. Even if everybody is an expert, the conflict perseveres due to the fundamentally uncertain nature of empirical science.

“There are always at least some uncertainties in an empirical risk estimate,” Sjöberg wrote.

People may push the risk bar up or down for various reasons, like peer pressure, vested interests, political views, or how much control they feel they have.

“A good example is alcohol,” Sjöberg wrote. Because people feel they can control how much they drink, the risks that come with it seem smaller to them.

Consumers, however, have little to no control over GMOs.

“Ever since GMOs entered the market 20 years ago, we’ve been kept in the dark about whether foods we feed our families contain GMOs.” states the website of Just Label It, a GM food labeling campaign.

No matter what scientists may say, it seems consumers still feel entitled to having a choice between GM and non-GM food.

While arguments outside science wield so powerful an influence on the GMO debate, it doesn’t mean scientists have no say. Assessing risks is a collaborative effort between experts and the public.

Paul Slovic, a psychology professor at the University of Oregon, has been studying risk perception for decades. He has said that the public’s understanding of risk is “much richer than that of the experts, and reflects legitimate concerns that are typically omitted from expert risk assessments.”

Experts can sometimes become accustomed to the risks through long experience and also may feel a greater degree of control over the risks than the general public, noted Sjöberg.

“There is wisdom as well as error in public attitudes and perceptions,” Slovic wrote. “Each side, expert and public, has something valid to contribute. Each side must respect the insights and intelligence of the other.”