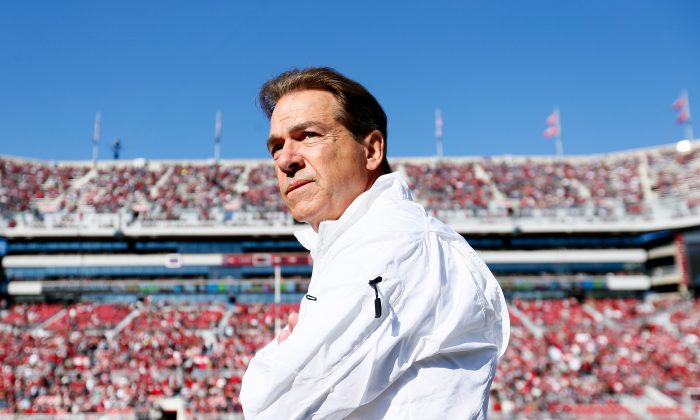 Nick Saban is currently the best coach in the nation. That much is for sure.

Did he need to beat Clemson on Jan. 11 in the national championship game for his fifth title in 20 years of coaching at the college level to prove it? Probably not.

But Saban did so anyway. But this time it wasn’t just with his tremendous preparation and top-notch recruiting.

Instead the former LSU, Michigan State, Toledo, and Miami (NFL) head coach made a gutsy, late-game call to change the momentum—something he rarely has to do, given his winning percentage of nearly 90 percent over the last eight years—and rally the team.

With the score tied at 24 early in the fourth and the Tide’s defense having trouble containing Deshaun Watson in the pocket, Saban stunned everyone with an onside kick call.

One kickoff return for a score later and the Tide were officially on cruise control with the game in hand. The only question left was whether Saban would crack a smile. (He did.)

Now the only question is where Saban ranks all-time.

Judging that is difficult given that his main competition coached roughly half a century ago. We’ll do it anyway. Here are the 10 best college football coaches of all time.

Switzer revolutionized the wishbone offense in his time with the Sooners. His teams won nine games or more 13 times in 16 seasons and had a pair of undefeated seasons.

Bowden spent his first six seasons at West Virginia before going to Florida State, where he coached from 1976 to 2009. His teams finished in the top five of the AP poll a record 14 straight seasons from 1987 to 2000.

Meyer won at Bowling Green (17–6) and Utah (22–2) before winning a pair of titles at Florida and another at Ohio State, where he’s an incredible 50–4 through four seasons with the Buckeyes.

Osborne could easily have had a fourth national championship had he decided to kick the extra point in the final seconds of the 1984 Orange Bowl against underdog Miami. A man of integrity, Osborne didn’t want the easy route, though. Instead he went for two, and the previously unbeaten, top-ranked Cornhuskers came up short and lost 31–30. Eleven years later, he won his first title and retired after winning three titles in his last four seasons.

Although he was only credited with a pair of titles, Paterno guided the Nittany Lions to five undefeated seasons during his 46-year run with the school.

Wilkinson’s biggest claim to fame was his NCAA record 47-game winning streak, which ended with a 7–0 home loss to Notre Dame in 1957. Wilkinson also guided the Sooners to a 31-game winning streak and boasted four undefeated seasons.

Rockne only coached for 13 seasons, but his Fighting Irish went undefeated in five of them and his winning percentage of 88.1 is the best of all time. Rockne was the one who turned Notre Dame into a national power. Had he not died tragically in a plane crash at the age of 43, he probably would be much higher on this list.

Leahy came to Notre Dame in 1941—just a decade after Rockne’s death—after a pair of seasons at Boston College and returned the Fighting Irish to the levels Rockne had attained. Incredibly, Leahy had seven undefeated seasons in 13 of his overall years of coaching, including six in his 11 years with Notre Dame.

No one has more national titles than Bryant’s six (all with Alabama). And when he retired following the 1982 season, his 323 wins were more than anyone else as well. Although he also coached at Maryland, Kentucky, and Texas A&M, Bryant enjoyed most of his success with the Crimson Tide, where he coached from 1958 to 1982.

Saban first rose to prominence in 1999 when his 9–2 season with Michigan State led to a job with LSU in the highly competitive SEC. Saban quickly built up the Tigers into a national champion by his fourth season (2003). After a two-year hiatus in the NFL, Saban came back to college football with Alabama. After an inaugural 7–6 season in 2007, he has led the Crimson Tide to eight straight seasons of 10 or more wins—while winning four more national titles.