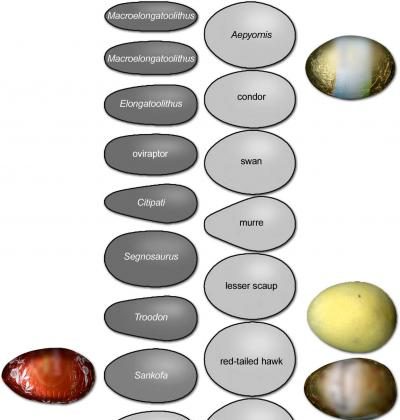 Where Does the Easter Bunny Get Its Eggs?

Easter eggs come from different “species”, says a scientist from the UK’s University of Leicester.

Recent research by Spanish scientists that compared the shape of dinosaur eggs with those of birds prompted Mark Purnell of the university’s Department of Geology to examine the origins of Easter eggs.

“Where do Easter eggs come from? At face value this is a simple question, but any parent trying to provide an answer this Easter might struggle to come up with a satisfactory response,” said Purnell in a media release.

“According to many, the eggs are delivered by the Easter Bunny, but that doesn’t really address the question; where does the Easter Bunny get them from? A quick search of the internet reveals a confusing range of rumour and speculation—could the Easter Bunny really be a hare? Are Easter eggs from hare’s nests (and are these really plover nests?) Or are the eggs just symbols of pagan gods?”

Not unsurprisingly, Purnell found a considerable variation in the size and shape of Easter eggs, much more so than if they had all come from the same “parent species”.

“Perhaps more surprisingly a few eggs are closer in shape to those of dinosaurs, with one in particular being the same shape as the 70 million-year-old dinosaur egg, Sankofa pyrenaica, described by the Spanish team.”

The Spanish study, by Nieves Lopez-Martinez of the Universidad Complutense of Madrid and Enric Vicens of the Universitat Autonoma of Barcelona, investigated ancient dinosaur eggs discovered in the Pyrenees to find out if they were more similar in shape to modern birds’ eggs or dinosaur eggs.

Dinosaurs and birds are the only egg-laying animals with unsymmetrical eggs.

Using a mathematical formula, the scientists worked out all possible egg shapes and then plotted 16 real eggs into this “egg morphospace”.

“We found that different species have different shaped eggs, and that the eggs of dinosaurs are not the same shape as the eggs of birds,” said Enric Vicens in the release.

“Dinosaur eggs tend to be more elongate and less rounded than birds eggs.

“Dinosaur eggs also tend to be more symmetrical with less distinction between the blunt and the more pointed end,” Vicens added.

A microscopic study of the Pyrenees eggs also revealed that they have an unusual shell structure, different from that of modern birds. Because of their unique shape and shell structure, Vicens and Lopez-Martinez described the eggs as a new species, Sankofa pyrenaica.

The eggs were found in rocks interpreted as sandy lagoon deposits, and were probably laid by a small carnivorous dinosaur, say the researchers.

Their research is published in the March issue of the journal Palaeontology.