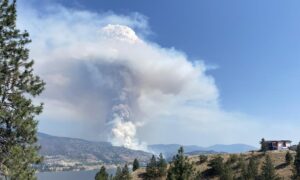 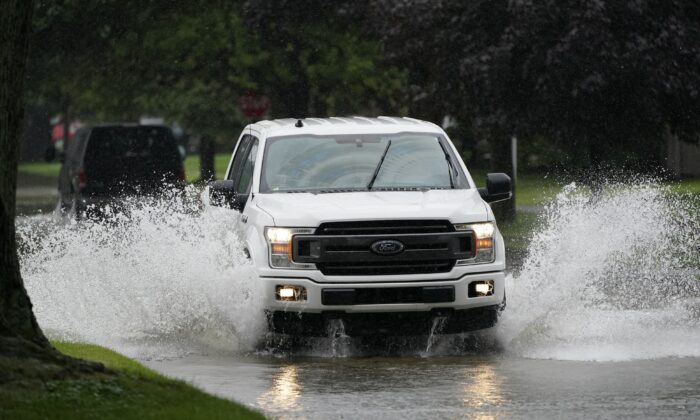 A truck drives through a flooded street, in Dearborn Heights, Mich., on July 16, 2021. (Carlos Osorio/AP Photo)
US News

‘When Will This End?’: Detroit Area Hit Again With Flooding

DETROIT—Steady rain drenched the Detroit area Friday, flooding highways and raising the anxiety of frustrated residents whose homes filled with water again exactly three weeks after thousands of basements were wrecked by sewage from a tremendous storm.

A downtown ramp to M-10, known as the Lodge Freeway, was below water and closed, while sections of Interstate 94 in Detroit and suburbs were also flooded for hours.

The National Weather Service posted a flood warning for Wayne County until late afternoon as well as flood advisories for elsewhere in southeastern Michigan.

“When will this end?” Chelsea Parr said on a Facebook page for Grosse Pointe Farms residents.

Indeed, people in the Grosse Pointe communities posted remarkable video of water rising in basements from floor drains, geysers in streets and manhole covers rising and falling, apparently from pressure under ground.

“Beyond angry,” said Sarah Peruski, standing at the top of the stairs to a flooded basement.

Detroit urged residents to clear catch basins in the streets. Dearborn blasted an outdoor emergency siren to warn people about the rain. The rain eased by early evening, though forecasters said it could resume before midnight.

In the Detroit area, some highways are below ground level, making them vulnerable in any long rain event. They depend on pumps to get rid of water.

A state police officer in waders used a boat to rescue a man stranded on top of his submerged car near the downtown convention center.

The pumps were working, but there was “more rain coming down than we can handle,” said Diane Cross, a spokeswoman at the Michigan Department of Transportation, said of the saturated freeways.

“The rivers and creeks and even the sewer systems, grassy areas that all absorb the rain normally are kind of full,” Cross said.

The rain fell a day after President Joe Biden declared a disaster in Michigan due to flood damage from late June. Thousands of basements in Detroit and some suburbs were swamped with water and sewage when more than 6 inches fell in just a few hours.

Power disruptions stalled pumps operated by the Great Lakes Water Authority, sending sewage back through pipes. Piles of possessions from contaminated basements sat on curbs for days before being hauled away by weary crews.

The agency insisted Thursday that it’s “ready for the storm.”