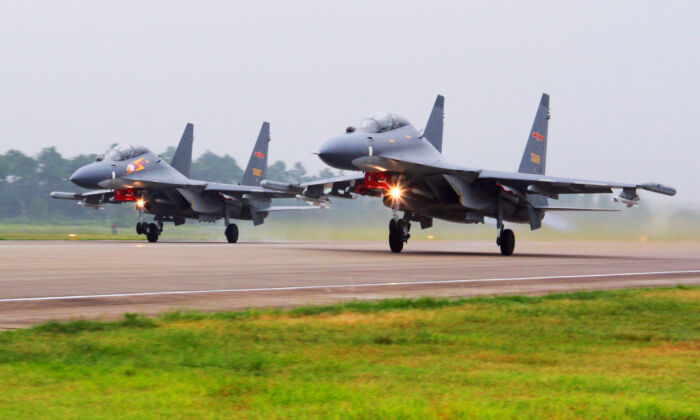 In this undated file photo by China's Xinhua News Agency, two Chinese SU-30 fighter jets take off from an unspecified location to fly a patrol over the South China Sea. (Jin Danhua/Xinhua via AP)
Thinking About China

When Will the Chinese Regime Start Shooting Down Taiwanese, American, Japanese, and Australian Aircraft?

A dangerous May 26 close-in harassing maneuver by a Chinese jet fighter against an Australian patrol aircraft operating near the Paracel Islands in the South China Sea reminds us that the Chinese Communist Party (CCP) and its People’s Liberation Army (PLA) are prone to calculated endangerment in their pursuit of military coercion.

This derives from the CCP’s penchant for fighting “wars of decision”—initiating offensive wars that, by their shocking violence, cause fear and self-deterrence in opponents that help create future strategic options for the CCP.

Then in 1979, Deng Xiaoping led a brief punitive war against Vietnam. On the surface, it was disastrous for the PLA. Still, it helped convince the Carter and Reagan administrations that Deng was opposed to the Soviet Union and deserving of the cornucopia of new military technology and investment that started communist China’s current “rise.”

The CCP and its PLA have initiated a number of smaller but still violent skirmishes also designed to shape China’s strategic environment to benefit the CCP.

In the mid-1970s and late-1980s, the Chinese regime used violent attacks to contain Vietnam and began its conquest of the South China Sea. In January 1974, the regime attacked a weakened South Vietnam, killing 75 Vietnamese troops to capture the Paracel Islands.

On the night of June 15, 2020, in the disputed India-China border area of the Galwan Valley, Chinese troops, taking advantage of longstanding agreements not to use firearms during border clashes, made surprise use of nailed clubs to attack Indian soldiers, killing at least 20.

This tradition of optional offensive wars will position the CCP well as it seeks global strategic hegemony. This requires a reflexive capacity to intervene in countries around the world in support of favored factions, even to support their wars to assure long-term military access to their territory.

But to be able to project military power globally, the CCP will first require control of Taiwan.

Taiwan is essential for next-generation warships, nuclear ballistic missile submarines, strategic nuclear missiles, and naval/air projection force bases, already positioned to dominate naval and air transport routes across Asia. Chinese control of Taiwan will largely result in the deaths of “democratic” Taiwanese should the United States and others retaliate against these bases.

Killing “democratic” Taiwan is also necessary to destroy the credibility of U.S. alliance guarantees and to create a political “moral” authority for the CCP to destroy other democracies unwilling to subordinate themselves to the CCP.

But on the way to its war over Taiwan, which shows no desire to surrender to CCP slave status, the CPP has to prove to the world that it is willing to kill as part of an escalating coercive campaign to prevent the United States from forming a military coalition to defend Taiwan.

For about a decade, the United States has waged a largely unpublicized virtual war against increasingly aggressive military posturing by the PLA that increasingly includes Russian forces, conducting harassment maneuvers against Taiwan and Japan, and training their troops for future blockades and combat.

American and increasingly Japanese forces have established a pattern of naval and air deployments that respond to China’s increasing naval-air deployments; in 2021, Japan intercepted 772 Chinese and 226 Russian aircraft probing its aid defense zones.

In May, the PLA conducted its first joint maneuvers with a PLA Navy carrier battle group and successive groups of PLA combat aircraft to the south and east of Taiwan, with the addition on May 25 of the fourth joint China-Russia nuclear-capable bomber patrol over likely interdiction routes to be used by U.S. forces that would assist Taiwan.

In behavior reminiscent of many Cold War-era “incidents at sea” involving Soviet and U.S. Navy ships, during May, the Japanese Maritime Self Defense Force used its largest helicopter carrier to visibly track the PLA Navy aircraft carrier battle group.

But it was the May 26 incident—in which a PLA Air Force (PLAAF) J-16 fighter fired infrared jamming flares very close to the Royal Australian Air Force P-8A anti-submarine and maritime patrol aircraft—that indicated the PLA might try to get away with either capturing a P-8A or killing it and its crew.

Australian Defense Minister Richard Marles called the incident “very dangerous.” China could easily modify its flares, which bloom hair-thin aluminum strands with much thicker strands that may cause real damage when ingested into one of the P-8A’s two turbofan engines.

A potential future Chinese “attack” could be timed to damage the P-8A’s engines and force its landing at one of China’s new South China Sea bases, allowing intelligence exploitation of this cutting-edge anti-submarine aircraft. This would be similar to China’s concocting of the “accident” that forced the emergency landing of a U.S. Navy EP-3 electronic surveillance aircraft on Hainan Island on April 1, 2001.

On June 7, a Chinese defense ministry spokesman said, “The Australian warplane has seriously threatened China’s sovereignty and security, and the countermeasures taken by the Chinese military are professional, safe, reasonable, and legitimate.” In reality, the regime will continue its dangerous harassments.

Just days before, on June 1, the Canadian defense ministry revealed that during its deployment of the Royal Canadian Air Force CP-140 anti-submarine and patrol aircraft to Japan from April 26 to May 26, patrolling near North Korea to enforce economic and military sanctions, a PLA aircraft had harassed the Canadian aircraft on “several occasions.”

On two recent occasions, the PLAAF deployed combat aircraft for intimidation missions near Taiwan simultaneously with the arrival of visiting members of the U.S. Congress.

On Nov. 9, 2021, the PLAAF sent four J-11 fighters into the Taiwan Strait area as a U.S. delegation landed in Taiwan on a U.S. military flight.

There is a point when the Chinese regime will decide that it can get away with “killing” or shooting down a Taiwanese, Japanese, Canadian, Australian, or American aircraft. That event is just as likely to be a “surprise” strike or designed to follow an alleged “provocation” by any of these countries.

The regime will craft the attack for maximum shock impact—with no regard at all for the loss of life—to produce a deterrent effect, one that likely causes a limitation in U.S. support for Taiwan, Japan, or South Korea in the event of a Chinese, Russian, and North Korean attack.

But the timing of such an attack may also be determined by China’s growing confidence that it can quickly establish military superiority over the area of the incident. In other words, the CCP would be more willing to use its PLA for deadly effects if it becomes larger and more effective.