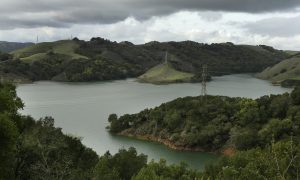 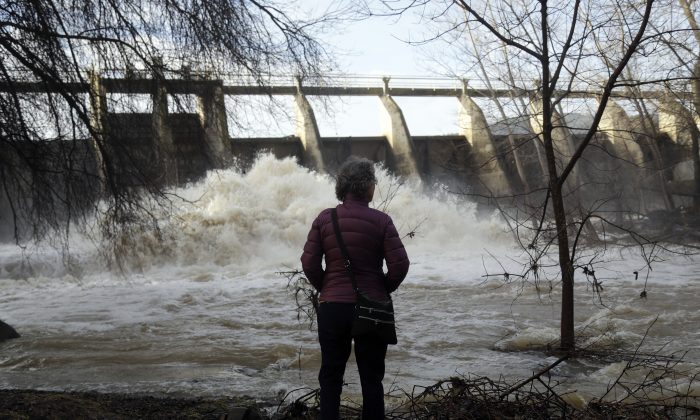 Chris Buchanan watches the overflow at a dam on Vasona Lake after a series of storms Tuesday, Jan. 24, 2017, in Los Gatos , Calif. (AP Photo/Marcio Jose Sanchez)
US

FRESNO, Calif.—Much of California has gone from withered to water-logged this winter, but the state’s top water regulator is not ready to lift emergency conservation measures enacted during the height of the drought.

“It makes the most sense to continue steady as she goes,” State Water Resources Control Board chairwoman Felicia Marcus told The Associated Press after the latest in a series of storms brought more snow to the mountains and record-breaking rainfall to parts of Southern California.

Marcus and the other four board members will decide Feb. 7 whether to extend measures requiring local water districts to enforce conservation rules, provide monthly reports on water usage and show they have a three-year water supply.

January typically is the wettest month in California. Marcus said in interviews this week that she is concerned that subsequent months could turn out dry and that California could again be forced to scramble to save water if the restrictions are not kept in place.

Water districts have been lobbying the board to back down. They say they are committed to conservation and better positioned than the state to ensure residents do not return to old habits.

“We do strongly object to doing this under the banner of a drought emergency that everybody sees no longer exists,” said Tim Quinn, executive director of the Association of California Water Agencies, a group representing water districts serving 6 million of California’s nearly 40 million residents.

Local water agencies plan for dry spells, he said, and many have invested many millions of dollars into shoring up reserve water supplies.

California has endured more than five years of drought. In January 2014, Gov. Jerry Brown declared an emergency, later ordering residents statewide to cut water use by 25 percent — the first mandate of its kind in the state’s history.

This year has been wetter than usual for almost all of California. The Sierra Nevada snowpack that supplies much of the state’s water contains nearly double its average water content and Los Angeles already received a full year’s worth of precipitation in a few rainy weeks.

In some areas of California’s vast agricultural heartland called the San Joaquin Valley, domestic wells have run dry and the land is sinking at an alarming pace as aquifers collapse.

“Just because we get a bunch of rain today doesn’t mean it solved our problem,” said Mike Maggiora of Maggiora Bros. Drilling Inc. Firms like his have been drilling wells as deep as 2,000 feet to hit water depending on the region, and Maggiora said it could take many more years to get back to pre-drought drilling levels.

Officials: More Than 40 Percent of California out of Drought

Regardless of any action regulators take in February, state officials are moving to permanently ban water wasting habits such as spraying sidewalks with hoses, running sprinklers within 48 hours after measurable rainfall and washing cars using hoses that do not have turn-off nozzles.

Fresno residents Joe and Lisa Libby last year did their part to conserve water, tearing out their grassy front lawn and replacing it with drought-friendly Mediterranean plants on layers of bark.

Other neighbors on their tree-lined street have started transforming their yards featuring plants that use little water.

Maintaining yards with a lush lawn “takes a lot of water. It takes a lot of work,” said Libby, a college history instructor. “I’m not sure in this environment that it’s necessary.”