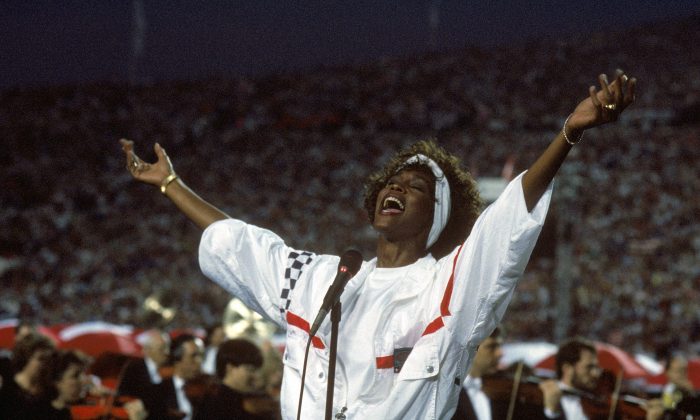 Whitney Houston sings the National Anthem before a game with the New York Giants taking on the Buffalo Bills prior to Super Bowl XXV at Tampa Stadium in Tampa, Florida, on Jan. 27, 1991. The Giants won 20-19. (George Rose/Getty Images)
NFL

Her rendition of the song was accompanied by the Florida orchestra. The Gulf War had started not long before that. Military men stood proud and F-16 fighter jets from a nearby U.S. Air Force base flew overhead—a massive display of a unified America.

“The country wanted something to bring us together, at one time. Her anthem was that moment. It galvanized America,” said NFL executive Jim Steeg, via USA Today.

“She moved me to tears,” says Steve Tasker, a Buffalo Bills special-teams star at the time. “And there wasn’t a dry eye in the house.”

Houston’s performance was memorable not just for the atmosphere at Tampa Stadium that night, nor the spectacular show she and the many performers put on. The performance is notable for what Houston and her team did with the song. It was a unique take on a well-known tune that inspired many renditions since.

Even Norman Schwarzkopf, the commander of U.S. forces in the Persian Gulf at the time, was able to hear Houston sing.

“I was touched very, very deeply,” he said after he was finally able to get a copy of the broadcast to his overseas base.

According to People, Houston took inspiration from Marvin Gaye’s rendition of The Star Spangled Banner at the 1983 NBA All-Star Game.

Houston worked with her musical director, Ricky Minor, to craft something unique. Her version perfected the chances that Gaye took with the song, while blending it back into a more traditional sound. The major cosmetic changes to the song as it was originally sung included slowing it down to allow more time for vocal expression, and changing the musical time signature from three beats per measure to four.

The new version impressed many NFL officials in preparation for the performance, but some felt that it was just too different from the classic original song.

However, the high regard in which people have held performances of the The Star Spangled Banner and the atmosphere surrounding the anthem at football games has taken a turn, recently.

Starting with Colin Kaepernick opting out of standing for the national anthem in protest of “police brutality”—first by sitting on the bench, which drew widespread condemnation, then by taking a knee throughout the anthem. The trend caught on among other players, sparking widespread debate.

After President Donald Trump condemned the trend at a rally in Alabama, the trend exploded, with entire football teams kneeling, including coaches and owners. The NFL commissioner also got involved, condoning the protests that have colored pre-game football with political overtones.