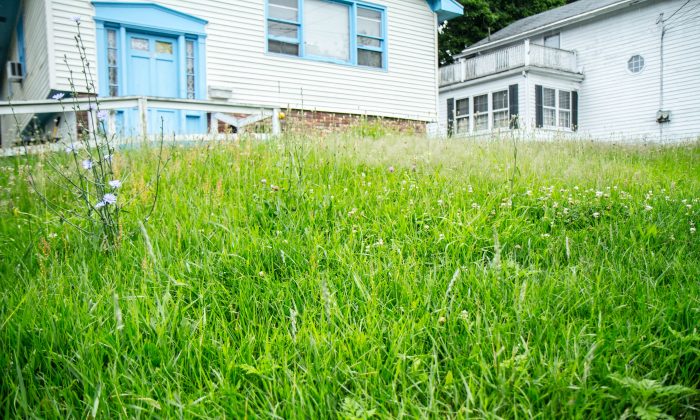 When the Grass Is Too Green and Tall

MIDDLETOWN, N.Y.—While more of an offense to they eyes than a threat to safety or business, overgrown lawns are a common complaint at city, town, and village meetings across the county.

Nancy Dillon, who until a few months ago had two vacant houses on either side of her home in Port Jervis, said it’s about all the hard work other people put into making the their own yards look nice that peeves her.

“Everybody’s trying to keep their property so nice and then you have something like that,” she said pointing at the house to the west of her that had an overgrown lawn. “It just kind of upsets you.”

For this reason and others, municipalities have created laws that regulate the height grass can grow after which a municipality will step in to mow it, and bill the property owner later.

Nowhere is this more of a problem than in Middletown, where 243 letters have already been sent this year warning property owners they need to cut their grass.

The city has two part-time inspectors who drive around the city and note which properties have code violations. If a lawn is more than 6 inches high they will first try to talk to the owner, said Jacob Tawil, commissioner of the Department of Public Works (DPW).

As the warning time decreases with each letter, the fines diametrically increase.

As the warning time decreases with each letter, the fines diametrically increase. According to the city’s code for a single-family house the fines go from $100 for the first warning to $250 for the second, and for the third and all subsequent violations, the property owner is charged $500.

“Before, we weren’t charging enough and these commercial properties, they were happy for us to come and cut the grass for them and, you know, we’re not in that business,” Tawil said.

With all the rain and sun lately, Tawil said it takes only a few weeks for a yard to look overgrown, but the real problem for the city are properties with absentee landlords, properties that are vacant, or ones that have been foreclosed on.

At 7,500 parcels of property in the city, Tawil said these kinds of violations take up a lot of the department’s time and energy. He said it has improved over the years, especially in respect to bank-owned properties, but is still a perennial problem.

At 3.2 square miles, Goshen is on the other end of the spectrum from Middletown. The village only produces one to two dozen unruly lawns a summer, said Ted Lewis, the building inspector for the village.

According to the village’s code, the legal height limit for grass is 12 inches and the owner has 15 days to comply after they receive a warning.

Lewis said that of the ones that do come to the village’s attention, 90 percent of them are dealt with after the first notice.

For the ones that aren’t, Lewis gets a quote from three contractors and chooses one to mow the lawn, sending the property owner the bill. He said the bill is in the ball park of $125 to $300 depending on the property and there is an extra 20 percent added on for “inspection and administrative overhead” the code states.

For each day the offending grass is not cut after the notice is sent, a $250 fine is levied on the property owner’s taxes.

For each day the offending grass is not cut after the notice is sent, a $250 fine is levied on the property owner’s taxes and the property owner could face imprisonment for 15 days or less, according to the village’s code.

While the expense is passed on to the property owner, what Lewis pays for is his time. In addition to his code enforcement position, he is also the fire inspector, the fire marshal, and the building inspector.

“[Lawn violations are] nothing that happens in a day, or even 10 days,” he said. “I have to drop what my entire other five jobs are that I have here in this village to go expedite a lawn thing, which is not a life-safety issue to me, so it’s not on the forefront of my list—ever.”

Similar to Goshen, the village of Otisville has relatively few problems with overgrown lawns, getting only a couple a year, said Frank Valentino, the superintendent of the DPW.

The process is similar to Goshen as well: someone usually submits a complaint if a property’s grass is 4 inches or more, and once property owners have been warned, they have five days to comply before the village steps in.

Every day that the violation continues, the landowner is charged.

“A person violating any provision of this local law shall, upon conviction, be subject to a fine of not less than $50,” the village code states.

Every day that the violation continues, the landowner is charged, and continues to be charged until the building department reinspects the property, the code states.

The inspector will not come on holidays or weekends, so if the grass is mowed on a Friday, and an inspector cannot come till Monday, the property owner will still pay for Saturday and Sunday as well.

Building and Code Enforcement Officer Dave Rivera estimates he has had to deal with about 30 runaway lawns in Port Jervis so far this summer.

He said most of them belong to off-site property owners, whether it be landlords, banks, or homeowners.

In Port Jervis the grass can be up to 9 inches on average before the city takes action.

The owner will be fined the cost of the mowing plus 25 percent for “inspection and other additional costs,” the code states.

The code enforcement officer can also issue a court appearance ticket, which if ignored, will constitute a fine of between $100 and $250 for each offense, the code states.

Rivera, who does property inspections around the city, said that in addition to harboring snakes and ticks, high grass affects the city’s appeal to would-be homebuyers. If more people took care of their houses and yards, he said, it would attract more newcomers, which would mean less vacant properties overall.

“Hopefully we can inspire the people in a positive note to want to keep these things clean and provide our city with a nice clean image,” he said. “It would just draw so many more people here,” Rivera said.

To report a an overgrown lawn, find your municipality below:

Call the Building and Code Enforcement office at 845-858-4000 or fill out a building department complaint form at portjervisny.org.