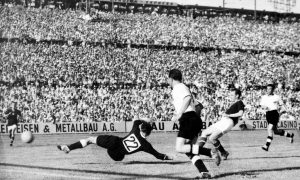 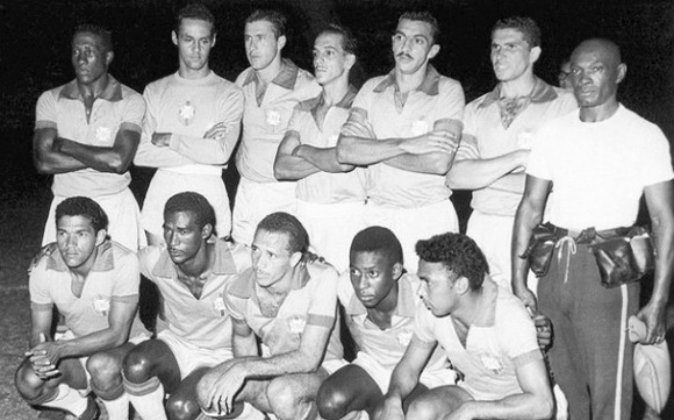 When Soccer Made Brazil

Brazil—as two recent book titles point out, and almost any kid kicking a ball anywhere in the world can tell you—is the country of soccer. While the modern sport’s actual birthplace is England, Brazil is the spiritual center of the sport. Brazil, whose beloved canarinho team is the only one to play in all World Cups and to have won five, perfected the English invention, inspiring a more poetic, fluid version of the game. And while Brazil made modern soccer, the extent to which soccer made modern Brazil is often underappreciated.

The sport landed in Brazil (and throughout Latin America) at the moment of the creation of the modern nation state, in the late 19th century. As a result it tied into the historical narratives—the stories that Brazilians crafted about themselves—that underpinned the nascent nation. Soccer helped to knit Brazil together into one country in the early 20th century and played a key role in incorporating people of African descent into the polity.

Soccer arrived in Brazil in the 1890s, brought by British workers and Anglo-Brazilian youth who were returning from school in England. At first played in elite social clubs like the São Paulo Athletic Club, the sport soon diffused downwards to the masses, and by the first decades of the 20th century was already the most popular sport in the country. Most soccer histories in Latin America suggest two separate “births”—the foreign birth marked by arrival of sport and the dominance of expatriate teams; and the national birth, when the local youth began to beat the Europeans at their game. In Brazil a third birth exists: when Afro-Brazilians enter the field in large numbers.

The first Afro-Brazilians played on major clubs in the 1910s—Arthur Friedenreich, Joaquim Prado, and others—but their inclusion was controversial. Freidenreich would straighten his hair and others would put on rice powder in efforts to lighten themselves. And Afro-Brazilian inclusion created political tensions as well. Though Brazil instituted universal male suffrage in 1891, slavery had ended only in 1888, and Afro-Brazilians were not considered a full part of the nation. Nor were they welcome on the field. The first mixed race team to win a top league championship in Brazil was the Rio team Vasco da Gama, in 1923. The following year the league changed the rules so that the club was no longer eligible to play, and though by 1925 Vasco was back in the top flight, the place of Afro-Brazilians in soccer and Brazilian society more broadly was hardly secure.

But racial divisions began to break down in the 1930s for a number of reasons. The rise to power of Getulio Vargas signaled changes both in the state structure and in Brazilian society. Vargas ended regional power struggles, and at the same time searched for elements of quintessentially Brazilian culture to unify the nation. He promoted capoeira—the Afro-Brazilian martial art that had been vilified and associated with supposed Afro-Brazilian criminality—and samba, until then a dance of the poor and the African-descended population.

While capoeira and dance mattered, soccer was already the king of sports, and its influence only grew during the Vargas years. In the 1930s the racial dynamics of soccer began to change as the sport became more inclusive. Professionalization in 1933 opened the doors for more Afro-Brazilians to play, but there was also a greater willingness to select Afro-Brazilians to play on the national team. Brazilians wanted the best team, not one that reflected an idealized “white” nation. Historians point to the inclusion of Afro-Brazilians Domingos da Guia and Leônidas da Silva on the 1938 World Cup squad as the turning point for racial inclusion in Brazilian soccer. And when Leônidas was named player of the tournament in France—where Brazil finished third—it encouraged discussion, and appreciation, for the contributions of people of African heritage to Brazil. That is, success on the soccer field opened up a broader space in the public sphere for Brazilians to debate their racial heritage.

Gilberto Freyre deserves to be credited with an important assist in the shifting of attitudes, alongside Leônidas da Guia and their 1938 teammates. A noted anthropologist, Freyre covered the World Cup for the Correio da Manhã newspaper. In his transatlantic dispatches, he lauded the “courage” of the Brazilian federation to send a “clearly Afro-Brazilian” team to the World Cup. Freyre suggested that Brazil’s brand of soccer dominated Europe (da Silva did not play the semifinal match) because of this African heritage, which in his Freyre’s eyes brought spontaneity, passion, improvisation, and guile to the team. The supposed irrationality of Brazil’s African roots allowed the team to outclass most of its European rivals.

Freyre’s sports journalism tied into the idea of Brazil as a racial democracy, which he had proposed a few years earlier in his magnum opus The Master and the Slaves. The book argued that all Brazilians carried some blackness in them, if only because of the “mammy who rocked us to sleep,” or the “mulatto girl [who] gave us our first complete sensation of being a man.” Notwithstanding its underlying racism and sexism, Freyre’s work was radical in its time, and both The Masters and the Slaves and his more popularly accessible journalism helped to foster a reevaluation of who was Brazilian and what Brazil should look like.

Not surprisingly, not everyone agreed that Brazil should be more inclusive. To the contrary, many continued to hold that Brazil’s population of African descent not only held the soccer team back, but impeded the development of the nation as a whole. They remained concerned with the negative impact of the black population both in soccer and in society more broadly. Moreover, many worried that the outside world—particularly Europe—perceived Brazil as uncivilized and feared that Afro-Brazilian players would reinforce that attitude.

These fears surfaced in 1950, when Brazil hosted the World Cup, and again at the 1954 tournament in Switzerland. In 1950 Brazil needed only a tie in the final game to win the tournament. Two hundred thousand fans packed into Rio’s Maracanã stadium—which was still unfinished—expecting a carnival. Instead, they saw Brazil defeated by a supposedly weaker Uruguayan team. Blame for the defeat fell on two players—goaltender Moaçir Barbosa and defenseman João Ferreira—of African descent. Both were accused of being too passive and too easily intimidated, and neither would play for Brazil again. The 1954 World Cup again brought defeat, to Hungary in the quarterfinals. Again, that loss was blamed on the “mongrel” nature of Brazil and its citizens. The head of the Brazilian delegation blamed the failure on the “physiognomy” of the Brazilian people. Worse, the English press called the Brazilian squad “a mob of hysterical negroids.” Both losses reinforced the idea, current among many Brazilian intellectuals, that the nation’s “racial cocktail” caused players—and the country as a whole—to crumble in the face of pressure. In short, the losses in 1950 and 1954 were interpreted as an indication of the inferiority of the Brazilian people. While soccer had the power to unite the country around race, it also had the capacity to divide.

But 1958 told a different story—one that united Brazil once and for all around the idea of a racially mixed nation. 1958 is of course the year that Brazil first won the World Cup and at which time the whole world really came to know the jogo bonito—the beautiful game—that was based on the play of Pelé, Garrincha, and others. From that point on there was at least general agreement that Brazil had a mixed race heritage and that people of African descent played an important part in society. This is not to suggest a state of complete racial harmony or equality. Afro-Brazilians still lag well behind their white compatriots in most social indicators. While Brazil hovers around the 80th spot in the Human Development Index, when disaggregated for race, white Brazil ranks around 40th and black Brazil around 120th. Nevertheless, for the better part of the 20th century, soccer helped to knit together a racially diverse nation.

Now, at the beginning of the 21st century, the sport may pull the nation apart again. Protests have been a regular part of life in Brazil since last summer, when a rise in bus fares touched off a wave of street demonstrations that brought millions of Brazilians into the streets during the Confederations Cup, and soon enough FIFA and World Cup expenditures became focal points of the protests. Brazilians have legitimate cause for protest. Government services lag well behind those of nations with similar tax rates; hospitals and schools are woefully underfunded. These concerns have only been exacerbated by the cost of hosting the World Cup. Initial estimates for stadium construction have more than tripled due to cost overruns and corruption, with Brazilian taxpayers covering the vast majority of the cost. Many of the promised infrastructure projects—those with long-term benefits for Brazil—have been scaled back or canceled outright.

When Brazil was first awarded this World Cup back in 2007, the news was met with almost universal acclaim and joy, for what the tournament would say about the nation’s identity and development. Now, on the eve of the World Cup, many Brazilians are legitimately torn, apprehensive, and even angry about what the tournament, and its preparations, say about the nation’s development. But let’s hope that in the days ahead we also see an outpouring of pride and joy at the seemingly more ephemeral legacy the sport has bequeathed Brazil—its mutiracial, pluralistic national identity.

This article originally appeared in Zócalo Public Square. This article was republished from The Weekly Wonk, New America‘s digital magazine. Read the original on the New America website.