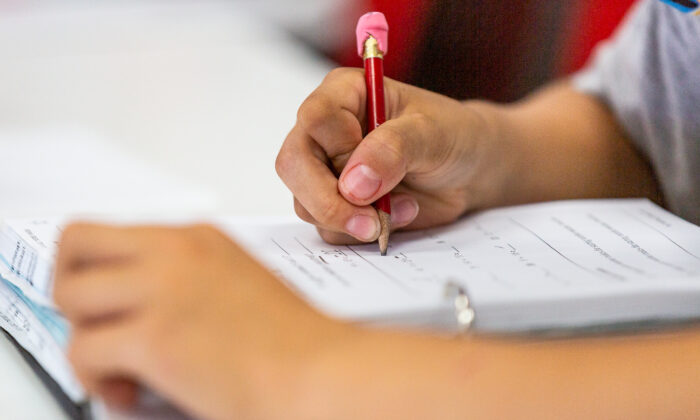 A student performs a math assignment in California on May 12, 2021. (John Fredricks/The Epoch Times)
Viewpoints

When Racism Permeates Math, Science, and Engineering, Can Society Survive?

I recently attended an online seminar put on by the world’s preeminent society for computer scientists, the Association for Computing Machinery (ACM), titled, “Language Matters: DEI and the Question of URM.”

DEI stands for “diversity, equity, inclusion,” and comprises an entire department in most corporations that oversees the hiring of more minority employees and makes sure they are treated “equally.” The term URM stands for either “underrepresented minorities” or “underserved minorities.” The speakers themselves were vague about what the term stood for, but they all said that the term was racist. Actually, the speakers seemed to label everything racist and resulting from “white supremacy.” Interestingly, they both used the term unsparingly throughout the one-hour talk despite having declared it racist.

I agree that racism now permeates every aspect of our lives, but not in the way those speakers think. When it permeates the hard sciences and engineering, can our society survive?

We know of the efforts of school teachers to teach critical race theory to our children. To teach them that all white people have a “privilege” that is baked into our American system and basic principles. To teach them that minorities are perpetual victims despite their accomplishments. That white people are oppressive, and just being born with white skin is a sin from which you can never be absolved.

Many Americans are just beginning to understand the consequences of this oppressive woke ideology. We are learning about programs like the California Ethnic Studies program, with its inherent antisemitism (because Jews are now labeled white oppressors) that’s now a requirement to be taught in all California public schools. We know about how mathematics is now labeled “racist” and that to compensate, math classes around the country focus on substituting singing, dancing, and drawing in math classes rather than an emphasis on, say, performing a calculation and getting a correct answer. These woke programs asserting racial dominance and racial privilege have already infiltrated just about every institution in America, though not in the way that the woke people claim.

I remember walking into corporations in America years ago where lobbies were filled with awards for their great products and great services. After all, companies want to advertise the superiority of their offerings to a captive audience. But in the last decade or two, that capitalist philosophy has been subjugated by racial and sexual politics. Walk into any corporate lobby nowadays, and it will be plastered with faces of the minority employees they’ve hired and the racial and sexual organizations that they support.

Some people think skin color correlates to work product. That’s called racism. Some people think it’s the price we pay for systemic racism—a building or two may have to fall down to make up for racism by hiring an unqualified but underrepresented minority to design it and calculate load and grade requirements, water flow rates, or material stress factors. Do you ever recall an American structure collapsing other than because of a natural disaster like a hurricane or earthquake? I don’t recall a single instance. Until recently.

Engineering and science rely on logic, formulas, and numbers. Not only does mathematics inherently not favor any one race, religion, skin color, or sexual preference, but civilizations and races throughout the world have contributed to it for millennia, including Egyptians, Arabs, Indians, Chinese, and Europeans. Members of all religions have contributed including Hindus, Muslims, Christians, and Jews, among others.

The ACM panel included Nicki Washington, a professor of the Practice of Computer Science and Gender, Sexuality, and Feminist Studies at Duke University, and Tiffani L. Williams, a teaching professor and director of Onramp Programs in the Department of Computer Science, and a Dean’s Fellow in Inclusion, Belonging, and Engagement at the University of Illinois at Urbana-Champaign. The discussion was moderated by Fay Cobb Payton, chief programs officer at the Kapor Center and co-chair of the ACM Education Board’s Diversity, Equity, and Inclusion in Computing Education Task Force. A white woman, Susan Reiser, senior adviser to the Provost of the University of North Carolina at Asheville, smiled and asked a few questions, but was not even named in the program.

The two black women professors had obviously achieved success in computer science but spent the hour complaining about how they had been held back by white people. Washington is what I would call a black feminist supremacist, given that she’s written a book titled, “Unapologetically Dope: Lessons for Black Women and Girls on Surviving and Thriving in the Tech Field.” Her book description claims, “If technical skills were all that were required to get ahead, then Black women would be well ahead of the rest in the tech field.” Williams wrote a blog post for the ACM titled, “‘Underrepresented Minority’ Considered Harmful, Racist Language.” In fact, during the presentation, we were informed that almost any language is racist if it’s used by a white person to describe a non-white person.

Strangely, around 18 minutes into the webinar, Washington claimed that white people use terms like “underrepresented minorities” or “underserved minorities” or “people of color” because “they’re really talking about blacks but are unafraid [sic] to say ‘black people.’” Why wouldn’t a white person be afraid today to use any particular label? The woke thought police criticize every way of discussing race, just as these women criticized these terms while also using them throughout their discussion. At about 24 minutes in, the term “women and minorities” was criticized by Washington for excluding black women and lumping them into “minorities.” At about 26 minutes in, they explained that the term “BIPOC” doesn’t describe who the white people (condescendingly referred to as “white folks”) are specifically talking about. And the term “BIPOC,” complained Williams about 28 minutes in, includes Asians who are not actually underrepresented.

The speakers also pointed to the ACM’s own doublespeak site, where traditional engineering terms have been found “offensive and exclusionary,” and replacements are suggested. The panelists stated that more needs to be done to change the “racist vocabulary of engineering,” and that these should not be suggestions, but rather, people “must be held accountable” for using these terms.

While these “learned” professors have either never heard of the First Amendment, or don’t understand it, let’s look at some of these “offensive and exclusionary” terms. In engineering, the terms “white box” and “black box” refer to systems where the internal workings are known and not known, respectively. They have no good or bad implication, except in the person who sees racism everywhere. Similarly the terms “blind” and “double blind” refer to experiments where the various factors are unknown to the researchers and the participants performing the experiments. “Male” and “female” connectors are now verboten because, I assume, the woke believe there’s no physical difference between the two. Also “master/slave” when referring to controllers in a system and “quantum supremacy” when referring to computing because … they sound like other terms that trigger people. At 51 minutes in, Williams noted that as vocabulary evolves, other words will need to be banned also.

If there was any doubt about the bigotry of these individuals, by 36 minutes in, the speakers abandoned their general complaints about systemic racism and began calling out white people more specifically. Everything is rooted in white supremacy, according to Washington. Williams explained that it’s not up to black people to help white people overcome their deficiencies, they must do it on their own. Washington added that there are too many white DEI professionals who shouldn’t be telling non-whites what to do. White people have created “spaces that were oozing with white supremacy.”

The conversation continued devolving. Despite the moderator initially claiming that the presentation would be an “honest conversation” with “honest dialog” for all participants, Williams angrily retorted to a question about stemming racism among all people with the insistence that only white folk are racists.

While the two professors and the moderator were cheerful and laughing for much of the presentation, I was emotionally drained by the end. One of the most prestigious engineering organizations in the world had just given a platform to bigots to spout their hatred with the organization’s full support.

Engineering, it seems, now takes a backseat to all the classifications that make up the modern woke caste system. Math, science, and engineering are the last bastions in this woke war. Unlike other fields of endeavor, when these fall, we can no longer build bridges, develop technology, or maintain our infrastructure. When these fields give in there’s little hope for our future. It’s possible that a new Dark Age is approaching.