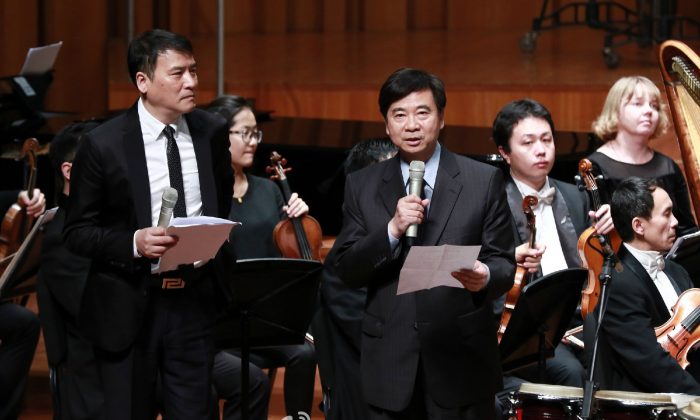 Wang Cizhao, president of Beijing’s Central Conservatory of Music, gives a speech at the 13th Beijing Modern Music Festival held at the National Center for the Performing Arts on May 24, 2015. (Weibo.com)
China

On Dec. 1, an innocuous announcement appeared on the website of China’s Education Ministry saying that Wang Cizhao, president of Beijing’s Central Conservatory of Music, had been fired.

In October, a social media post—cited by the Ministry in its statement—complained that Wang had thrown an “extravagant” wedding for his daughter with help from colleagues. Wang had enjoyed a meteoric career at the conservatory but abused his position, the statement continued.

To the uninitiated, Wang’s case may seem like one among tens of thousands—the number of Chinese officials investigated for corruption in recent years.

But more seasoned connoisseurs of the symphony that is Party politics have picked up on a deeper melody in Wang’s activities, namely, that involving a former Politburo member and the first head of the 610 Office, Li Lanqing.

The 610 Office is a Chinese Communist Party organ that human rights activists call “China’s Gestapo,” because it is responsible for implementing the regime’s suppression of the Falun Gong spiritual group. Its activities are aimed at having Falun Gong practitioners write forced confessions against their belief system, and pledge allegiance to the Party.

Li is a retired member of the Politburo Standing Committee, which commands the Communist Party, and he was China’s vice premier between 1998 and 2003. Li also served as head of the Education Ministry during his career, which ended with his role as head of the secret police force and the political unit that oversees it.

Wang helped Li boost his musical credentials from the late 1990s, after their friendship began earlier in the decade.

The warm relationship between the political heavyweight and musical academic are evidenced by the unlikely credentials that Li, apparently an amateur music lover, racked up during Wang’s tenure at the Central Conservatory, which began in 1998.

Li’s connection to the conservatory began in the mid-’90s, a few years before Wang was named the institution’s president.

In 1995, despite possessing no formal training, Li gave a lecture at the school on “the social functions of music.”

According to the Ministry of Education, when Li published a book, “Li Lanqing’s Essays on Music,” Wang praised the work. In his professional opinion, Li’s work contained “deep academic content” of which Wang was not previously aware.

In November 2002, upon Li’s retirement from the Politburo Standing Committee, he was hired as a guest lecturer at the music conservatory.

Chen Kuide, chief editor for the Chinese-language commentary site China in Perspective, said that upper-level Communist Party officials such as Li Lanqing cultivate relations with the artistic sphere as a means of boosting their prestige and creating a “cultured air” for their legacies.

“They want to maintain their social status, even after retirement,” Chen said in a telephone interview.

Chen said that Chinese officials feel a need to “present themselves in a style befitting modern politicians.” This means showing “how traditional and cultured” they are.

In Chinese social custom, scholar-gentlemen were considered rightful statesmen, as they were custodians of Confucian virtue and knowledge. As the Maoist thought that reigned supreme in the early years of Communist China loses its appeal among broad swathes of society, including officialdom, politicians may be looking to latch onto this means of improving their reputations.

“By improving their reputation,” Chen says, officials “gain some sort of glory for the rest of their lives.”

Possibly as a means of boosting their legitimacy, communist regimes, including China’s, have often resorted to the sometimes clumsy trumpeting of the credentials and erudition of their leading officials, even when the accolades are unwarranted.

In the 1960s and 1970s, Jiang Qing, an actress who later became the fourth wife of China’s communist leader Mao Zedong, wielded huge influence over the arts, particularly dance. She was widely flattered in the press as an artistic genius behind revolutionary operas like “The Red Detachment of Women” and other plays.

During the Cold War, the state press controlled by Romanian dictator Nicolae Ceausescu regularly printed paeans to his wife Elena’s excellence in chemical research, a field in which she had no formal training. Through the influence of her husband, she received many honorary awards from Romania’s state-run scientific community.

The combination of Li Lanqing’s musical tastes with his more brutal professional interests—torture and brainwashing—seems to be a case of worlds colliding.

As the first director for the infamous 610 Office, Li was one of the key officials who mapped out the plan of attack for the Party to attempt the brutal suppression and ideological conversion of tens of millions of peaceful Falun Gong meditators. The 610 Office, created on June 10, 1999, was formed specifically for this purpose. As an ad hoc Party agency, it does not have an existence enshrined in law or due process.

Li was a linchpin director of the agency, helping turn the order by then-Party leader Jiang Zemin to eliminate the practice into a nationwide security mobilization. Jiang had declared Falun Gong, and its rapid popularity in China, a challenge to the Party’s Marxist ideology.

“Li Lanqing carries the responsibility for the policy and the execution of this organization since its establishment,” says the Human Rights Law Foundation, an NGO that has brought legal complaints against Li in several countries.

“He must therefore be considered to be the perpetrator of the daily acts of torture, massacres, disappearances, rapes, pressures, and threats currently carried out by the police services under his direct authority,” the legal brief says.

In a Party meeting of over 1,000 top officials from around China in 2001, Li Lanqing called on “the Party and government’s leaders and the cadres of all levels and the masses to… do their jobs well in the struggle against Falun Gong.”

The term “struggle” in Chinese is closely identified with the Maoist tactics of the 1950s, and during the Cultural Revolution, and typically refers to political persecution.

Human rights researchers estimate that since Chinese authorities began persecuting Falun Gong in July 1999, hundreds of thousands or millions of people have been incarcerated.

While several thousand Falun Gong practitioners have been confirmed dead as a result of police abuse in detention centers, labor camps, and brainwashing centers, tens of thousands are believed to have been murdered in Chinese hospitals for their internal organs.

Whatever Li’s intentions involving the Central Conservatory of Music and his friendship with Wang Cizhao, the latter’s downfall likely isn’t good news for the former Politburo member.

“The fact that Wang Cizhao and Li Lanqing’s ties are so tight,” said Chen Kuide, means that Wang’s dismissal is possibly a move against Li.

Pointing to the ongoing anti-corruption campaign, led by current Chinese leader Xi Jinping, which is combing through China’s ruling elite, Chen said that those purged usually have their followers taken out from underneath them first, “regardless of what positions they occupy in society, be it industry, business, or academia.”