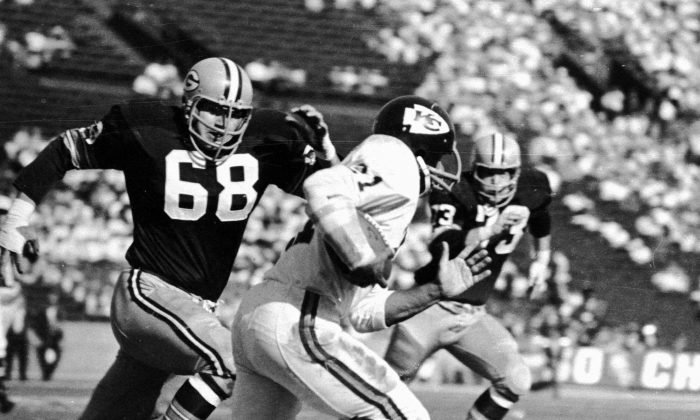 If you ever wanted to know everything about the first Super Bowl, the merger that led up to its creation, how the NFL–AFL rivalry started in the first place, and everything in between, noted sports author Harvey Frommer has written the perfect book for you.

“When It Was Just a Game: Remembering the First Super Bowl” (Taylor Trade Publishing, $29.95, 288 pages) is a book that delivers even more than the title suggests. Frommer gives you the full background leading up to Super Bowl I—then known as the AFL–NFL World Championship Game—as well as great insights into the historic game itself from his dozens of interviews of those closest to the action.

Frommer’s piece is a detailed oral history of how the NFL and AFL started, what led to their merger, and ultimately their inaugural championship game in 1967, which has gone from an innovative interleague matchup to the must-see mega sporting event it is today.

“The idea for this book was always in my head,” said Frommer in a recent interview with the Epoch Times. “I was fortunate really, to find guys who had played in the game, people who saw the game, and media who covered the game.”

Frommer then combined his recent interviews with those he had previously conducted with influentials like Howard Cosell and Pete Rozelle—originally for his thesis—and the result is a one-of-a-kind classic.

In addition to the bigger picture of how the Super Bowl came about are a number of lesser-known anecdotes. Examples like why Pete Rozelle had to spend two hours pretending to wash his hands in the bathroom while waiting to be elected commissioner, why Hank Stram made sure every player had gum in his locker before kickoff, and the battle between Rozelle and Vince Lombardi about where the Packers would practice leading up to Super Bowl I, and many more are revealed in Frommer’s book.

Related Coverage
Book Excerpt: ‘When It Was Just a Game’

Frommer himself admits that most of the interviews he did yielded new information that even he, a football historian, hadn’t heard of, like the fact that “Vince Lombardi and Hank Stram and the Green Bay Packers and the Kansas City Chiefs really paved the way for the African-American football players to become dominant,” said Frommer. “That Super Bowl had the most black players in professional football ever competing on the same field at the same time,” he said.

In addition to the backdrop leading up to the big game itself, the book puts the reader right into the halftime locker-room scenes of both teams.

While the pressure-free Chiefs had passed their way through mighty Green Bay’s defense and only trailed 14–10 at the midway point, Green Bay was feeling the weight of the entire NFL—which was expecting them to not only win but also thoroughly dominate the winner of this upstart league in their first-ever matchup.

A Second Book Excerpt From: “When It Was Just a Game”

But Lombardi—only the greatest coach in NFL history—knew just what to say, according to former Green Bay Packer Willie Davis, who takes you right inside the locker room in Frommer’s book, to listen to Lombardi’s speech: “We played 30 minutes of football adjusting to the Kansas City Chiefs, and we’re probably okay, but what I want you to do is go out and play 30 minutes of Green Bay Packer football and see how the Chiefs adjust to you,” Davis recalls Lombardi saying.

It’s the kind of insight only Frommer’s must-read book has. Highly recommended.