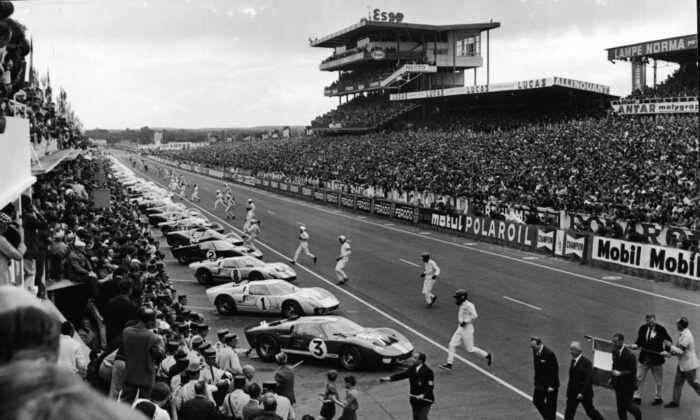 When Ford Fights Ferrari, We All Win

You don’t need to be a die-hard gearhead to appreciate what goes into, and comes out of, racing
By Jen Maffessanti
Share
ShareFlipboardTweetRedditEmail
MOREPRINTFONT BFONT S

If you weren’t planning on seeing “Ford v. Ferrari,” which came out on Nov. 15, I’d recommend changing your mind. Based on the real-life story of the Ford–Ferrari feud of the 1960s, as told in the nonfiction book “Go Like Hell,” it manages to capture the spectacle and thrill of a 24-hour endurance race as well as the competitive spirit and insatiable drive necessary to even think that doing something that patently bonkers might be a good idea.

But you don’t need to be a die-hard gearhead to appreciate what goes into, and comes out of, racing.

It’s said that racing betters the breed. This means that the engineering that goes into making a fast, efficient, reliable, and safe race car generally ends up in the production cars you see on the road every day. Indeed, basic features that we take for granted in our daily drivers like disc brakes and rearview mirrors appeared on race cars years before they ever made it onto the street. Even anti-lock braking systems on cars began on the race track.

But racing has improved more than just driver safety. Huge gains have been made in fuel efficiency and overall vehicle durability, too.

In a race, of course speed matters, but is it really all that important at the margins? Half a mile an hour slower over the course of a regular daily drive doesn’t make any real difference, but in a race, it definitely does.

The 24-hour endurance race at Le Mans that’s featured so heavily in “Ford v. Ferrari” is a perfect example. When the winning team is averaging 140 miles per hour (mph) the entire time but your team is averaging 139.5, by the end of the race, not only are you not in the top spot, you’re 12 miles behind them. Forget the lead position, you’re not even on the lead lap.

Since it’s an event constrained by time, not the number of laps, the exact distance covered during the race varies from year to year based on weather conditions and how many yellow flags are thrown, but it’s generally somewhere upward of 3,000 miles, 85 percent of which is at full throttle. That’s like driving from Miami to San Francisco. It means tens of thousands of gear changes and thousands of braking points.

The event began as a way to showcase the reliability of manufacturers’ cars, and that’s still the case, but as time goes on, the racing style has shifted from being more like a marathon to being more like a 24-hour sprint: all-out, all the time. It’s incredibly demanding on the equipment (not to mention the drivers).

Big-name manufacturers like Porsche, Audi, Ford, Chevy, and Toyota sink millions of dollars and thousands of man-hours into research, development, and testing in order to be competitive in these races. That’s a huge investment. So what are they getting out of it? And how does that improve things for the rest of us?

We all know that racing is about going fast, and nothing slows a car down during green-flag racing more than taking a pit stop. The less time you spend in the pits, the faster you can finish your race (or, in the case of timed events, not distance-limited events, the farther you can go). When you’re only stopping for tires and not fuel, you can get beauties like this world record-breaking stop that the Red Bull Racing Team managed this year.

Granted, Formula 1 (F1) cars don’t refuel during races, so they can manage those blistering pit stop times. But for cars like what you’d find at the 24 Hours of Le Mans, the rulebook strictly limits not only the size of the fuel tank but also the maximum amount of fuel the engine can use at any given time, as do many racing series these days. Since refueling the car takes longer than changing the tires (the two most common pit stop actions), the less you need to refuel the car, the faster your average speed.

Ford’s Ecoboost engines were developed, in part, with the help of Chip Ganassi Racing (a sports car racing team) before they became a factory Ford team. The combination of a smaller displacement engine with direct fuel injection and a turbocharger allows it to blend improved performance with improved fuel economy. You can even buy Ford’s least expensive car, the Fiesta, with this technology right now.

Further ahead, F1 has just announced its intention for the entire racing series, including the road and air transportation of staff and equipment, to be carbon neutral by 2030. It’s not clear right now how they intend to manage it, but if anyone can, I’d bet it would be the wizard-engineers that work on Formula 1.

Any part failure during a race can mean precious minutes, or even hours, in the pits or garage getting it fixed, all while your competitors are still out on track getting further and further ahead, so durability is vital to race success. Endurance races like Le Mans are especially brutal on equipment. For example, there are two places in particular at Le Mans where cars have to go from more than 200 mph to less than 80 mph in order to make their turns safely, so those brakes better not fail.

The brakes on race cars do get changed during endurance races, though, which was an important plot point in “Ford v. Ferrari.” The Ford team in 1966 pioneered changing the entire brake assembly as a unit during the race. These days, the process has changed more in execution than principle. Check out this incredible pit stop the Corvette Racing team pulled off at Le Mans this year. Four fresh tires, fresh front brakes, fresh driver, and a full load of fuel in less than 40 seconds.

Improved durability and reliability aren’t particularly sexy. After all, nobody tweets about how their car engine didn’t blow up today. But the durability of individual parts and the reliability overall of cars have improved over the years, thanks in part to the development done by racing teams. Today’s cars, despite dramatic increases in the use of complicated electrical systems and other historically finicky parts like automatic transmissions, are more reliable than ever.

The less your car needs repairs, the less money you spend on it. And for manufacturers, a reputation for reliability can translate into a better bottom line. The manufacturers of the five most common cars in America—Honda (via their luxury brand Acura), Chevrolet, Nissan, and Toyota—have all won not just endurance races but class championships within the last five years.

Racing Is for Everyone

I love auto racing, especially endurance racing. The first professional race I ever went to was the Rolex 24 Hour at Daytona and, clearly, it made quite the impression. But I also understand watching racing isn’t for everyone. Not everyone enjoys the noise of an engine at full throttle, the scent of race fuel exhaust, the feel of the wind as prototypes whip past you at 180 mph on the front straight.

But racing is for everyone. The gains made on the racetrack improve everyone’s lives. Even if you don’t own a car yourself, you’ve certainly ridden in one. Cars are safer, more reliable, and more fuel-efficient than ever before in part because of the R&D investment made by manufacturers to be competitive on the racetrack.

Prototyping anything is incredibly expensive, but it’s how we create new and better things. Of course, without the element of competition, there wouldn’t be as much incentive to push the limits as fast as possible, which is why race teams and the suppliers of their parts tend to be out on the far leading edge of experimental breakthrough technology. The investment is worth it to these manufacturers because it translates to increased sales. And consumers can be confident in their purchases because companies have put their products through some of the most grueling tests available: racecourses.

So the next time you slam on your brakes, pass some slowpoke on the road, or even just glance in your rearview mirror, practice a little gratitude for auto racing and the spirit of competition. And maybe catch a race at the track next season. While only one car will take the checkered flag, we all end up winning.

Jen Maffessanti is a senior associate editor at the Foundation for Economic Education and mother of two. When she’s not advocating for liberty or chasing kids, she can usually be found cooking or maybe racing cars. Check out her website. This article was originally published on FEE.org.