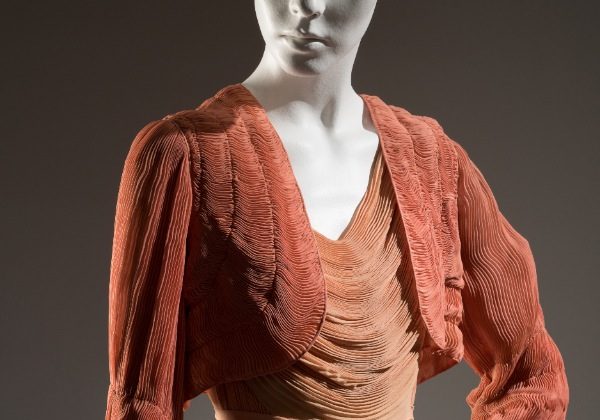 A 1932 Hélène Yrande coral and peach pleated negligee ensemble, silk chiffon from France. (Courtesy of The Museum at FIT)
Fashion

There has never been a bigger shift in fashion design as the shift from the 1900s to the 1920s.

The female silhouette prior to the year 1900 and even up to 1905 was that of an elaborate, giant pigeon. The effect was due to the so-called “S-bend health corset”—a contraption of a corset that was laced at the waist and forced the hips back, while the chest area became a drooping monobosom—called the “pouter pigeon effect.” Its “health” effects may be a bit obscured from our modern minds, but according to its proponents, it was meant to remove pressure from the vital female organs.

In reality, the pursuit of the hand-span waistline persisted, and even the health corset was tightened to the point of overriding any of its potential benefits.

World War I, in which young women were active, saw them wearing elastic belts in lieu of corsets that would have been overly restrictive. Once the war was over in 1914, there was no going back. Once women felt the freedom from less restrictive clothing they wanted to explore the new fabrics and in the same context, the changing lifestyles.

“The First World War completely up-ended the European social fabric. But also train travel, technology, the way that fabrics were woven changed as well. All this happened after WW1,” said Patricia Mears, deputy director of The Museum at the Fashion Institute of Technology (MFIT) and curator of “Elegance in an Age of Crisis: Fashions of the 1930s” exhibition.

The exhibition showcases womenswear as well as menswear from the decade in which women designers flourished and recalibrated the course of fashion design for good.

According to Mears, modernity, by our standards, comes out during the 1930s, not the1920s. Apart from the fact that it was a freer style, the cut of ’20s dresses was essentially a tube of fabric that only looked good on a slim-figured woman.

While the Edwardian era and most of the preceding eras subjected the female physique to manipulation beyond recognition of what a woman’s body really looks like, the 1920s treated it as a hanger for overembellished fabrics.

It was only in the 1930s that designers such as Madeleine Vionnet, Augusta Bernard, Louiseboulanger, Balenciaga, and Alix, developed fashion that recognized the goddess-like proportions of the female physique and sought to celebrate it rather than hide it. This had not happened since antiquity.

Their work can be seen in the exhibition with special emphasis on the development of the bias cutting technique and draping.

Madeleine Vionnet who pioneered the bias-cut created her designs in the round, starting with the fabric. But it was the advent of lightweight fabrics such as silk crepe and jersey-knit that gave her a new canvas.

“I think that this is why Vionnet is the most spectacular, because nobody thought like this before, and I think that this why people revere her. Those who know what really great clothes are, look at her as the preeminent couturier of the 20th century,” said Mears.

According to Mears, if they had kept fabrics very taut, thick, and narrow, [Vionnet] could not have done anything with them, and it would have been much more difficult to get the fluid effect that Vionnet is known for.

“So it was all of it coming together—technical innovation, aesthetic changes, and artistic developments. Draping was not a standardized dressmaking technique until she came along and pattern-making only existed for men’s suits.”

The evening gowns that showcase this style in the exhibition are simple, elegant, and the precursors of what is still often seen on the red carpet to this day.

The ivory tulle evening gown attributed to Augustabernard is a marvel—it is made from a single piece of fabric wrapped around the body. This technique was also absorbed by the house of Elsa Schiaparelli and can be seen in the black crepe version of the tulle gown displayed alongside it.

In America, during the great depression which started in 1930 and lasted until the middle 1940s, Hollywood took on the role of offering an imaginary escape from the harsh reality of everyday life. Film studios really took to the sultry style afforded by the new fabrics that seemed to be poured onto the body and had the resources to create lavish couture garments—albeit for movies.

An example of such a garment is also part of the Elegance in an Age of Crisis exhibition—the dramatic hand-beaded gown worn by Joan Crawford in the black and white movie “The Bride wore red.” And it is very red, complete with cape and covered in over two million beads.

American designers such as Elizabeth Hawes, Valentina, and Claire McCardell whose creations are also featured in the exhibition were successful in translating the new look to American taste.

There were far-reaching innovations in menswear tailoring as well. They resulted in a more relaxed look that men took to wearing as the norm. In a short film that accompanies the exhibition, Edward VIII, who married American socialite Wallis Simpson, is seen outdoors sporting the light-colored suit with wide trousers and a relaxed-fit jacket. He is standing surrounded by other officials who, in stark contrast, are still wearing black, formal tailcoats. The tailcoat, named for its pronged tail-like back, reaching up to or below the knees was still worn at formal occasions. The new look for men was a suit tailored to create the illusion of a large torso, with wide, padded shoulders and tapering sleeves.

On view in the exhibition are linen jackets and wool coats on loan from the Rubinacci Museum that reveal the revolutionary innovations of legendary Neapolitan tailor Vincenzo Attolini, who worked for Gennaro Rubinacci’s firm, London House, and who was the first to create “deconstructed” jackets and coats.

Men’s suits have never been more dramatic and masculine than they were during the 1930s and up to the mid 1940s.

Despite the ravages of the Great Depression, the fashion revolution that took place alongside the hardship of the decade changed fashion forever.

The exhibition also includes a number of accessories from the 1930s. These hats, handbags, and shoes allowed women to adapt a well-worn outfit to different occasions. A highlight is an array of shoes worn by the legendary dancer and movie star Fred Astaire.