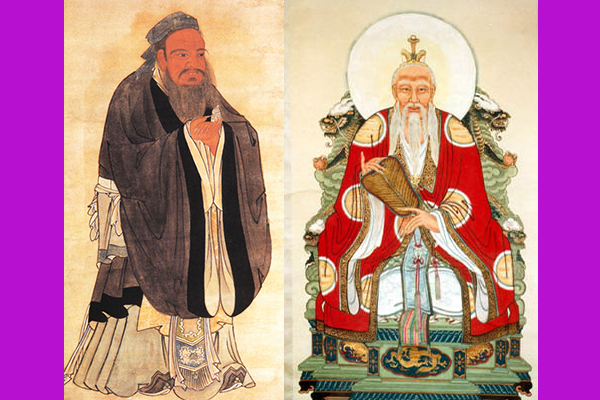 Laozi and Confucius, the two most famous sages in Chinese history, appeared at the same time 2,500 years ago during the Spring and Autumn Period in China.

According to “Shiji”, or “The Records of the Grand Historian”, Confucius went to Luo Yang, the Capital city, to meet Laozi to enquire about propriety (the order of rituals and courtesies – more superficially called ‘etiquette’ in English).

When he came back, he kept silent for three days.  His students were curious and asked their teacher what had happened.

Confucius said: “I know how a bird can fly. I know how a fish can swim. But I do not know how Laozi could rise and fly like a sublime dragon riding on clouds in the sky.”

In “Zhuangzi”, an ancient Chinese Taoist text, there is a story about Toeless Shu Shan meeting with Confucius and Laozi.

As with Confucius, Shu Shan lived in the state of Lu. His toes were chopped off as punishment for a crime he committed when he was young.

When Shu Shan learnt that Confucius was a wise man and had many students, he walked all the way on his heels, with great difficultly, to see Confucius, hoping that he would be accepted as a student.

Confucius said to Shu Shan when he arrived, “You are an indiscrete man. You broke the law and your toes were chopped off. Now you come to ask for help, it is already too late.”

“I was reckless when I was young,” Shu Shan replied, “I did not treasure myself enough, I broke the law and lost my toes. But I feel that I still have inner qualities more precious than my toes. I come to you to ask for advice, for preserving my inner precious qualities, as long as I can cultivate my morals to perfection, what big deal is it to be toeless?”

He added, “I heard that the sky encompasses all without selecting, the earth holds everything with no prejudice. I was regarding you as a holy sage, much like the sky and earth; I did not expect you to be so secular.”

Upon hearing this, Confucius bowed and saluted him, saying: “Mr Shu Shan, I am indeed very shallow. Please do come in and teach my students and myself!” But Shu Shan left without replying.

Shu Shan then went to see Laozi. He asked him, “As a morally wise man, why does Confucius keep coming to seek advice from you?  I am afraid that he can not break through the limit of his own preconceptions and become one who has acquired the Tao.”

Laozi replied:  “Confucius has not broken through the boundary of worldliness. If he could see life and death as the same thing, putting equal weight on what he can do and what he can’t do, then he would be free of his hindrances.”

Confucius spent all his life teaching people how to live decently—in moderation and conforming to the law of morals that guide a man’s conduct: benevolence, righteousness, propriety, wisdom, and faith.

The Tao, the Way of Laozi, is the teaching of the Divine.  Laozi came to pass on the message that the purpose of man’s journey on earth is to go back to the origin, to retrieve the true self.

“Tao Te Ching” (or Dao De Jing), is the primary text of Taoist thought that Laozi left behind. In Chapter 38, Laozi said:

“… The Tao is lost, and then virtue

Virtue is lost, and then benevolence

Benevolence is lost, and then righteousness

Righteousness is lost, and then etiquette

Those who have etiquette

are a thin shell of loyalty and sincerity

And the beginning of chaos …”