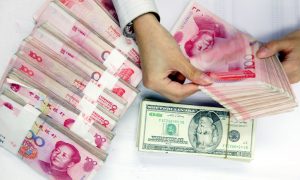 It's Official: China Dumped $94 Billion of Treasurys in August
0 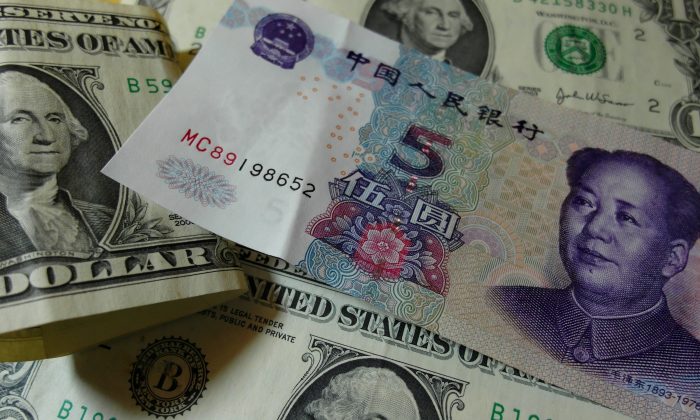 Yuan banknotes and US dollars on a table in Yichang, central China's Hubei province on Aug. 14. (STR/AFP/Getty Images)
Business

Yesterday we got another confirmation that China is selling more foreign exchange reserves to keep its currency stable.

But what does this actually mean? Sure, the $43 billion number the People’s Bank of China released yesterday is quoted in dollars.

That doesn’t mean, however, that China only sold dollar reserves, such as Treasury bonds. It could sell euros, yen, pounds, stocks, bonds, gold: everything is possible because we don’t know how China is investing its reserves.

Of these, we know that China itself was holding $1.24 trillion in Treasury securities in July of 2015 (watch out for the August number coming out mid-October), down from $1.32 trillion in November of 2013.

This $80 billion decline, however, doesn’t match the $400 billion decline in foreign exchange reserves from August of last year. Instead we need to look to another country and go back in time a little to find out China has indeed been selling mostly Treasury securities.

As official Chinese holdings topped out in November of 2013, all of a sudden and without official notice, Belgian holdings—historically around $150 billion—started to soar. The country accumulated $213 billion worth of Treasurys from Sept. 2013 to March 2014 ($381 billion).

In order to accumulate such a large amount of Treasurys one needs a large trade surplus. Belgium’s modest surplus of $30 billion for the few months in question at the turn of the year in 2013 doesn’t fit the bill.

China, however, did have a trade surplus sufficiently large to be able to buy this amount of Treasurys, the question is why it would do so through Belgium.

Belgium operates the Euroclear system which let’s foreign countries transact anonymously and China has had a history of using UK accounts to buy Treasurys. Using different fronts makes sense to not show your hand to the markets, especially if you are buying in size.

It’s also good if you are selling in size, which started to happen in Belgium in earnest in February of 2015. Holdings dropped $93 billion in a single month, right when the capital outflows of China started to shift into high gear.

Taken together, China and Belgium have sold $185 billion worth of Treasurys until July 2015, or 92.5 percent of all foreign exchange holdings sold until that month, even more than the 70 percent Goldman estimated. This is likely because China is strapped for dollars (not euros or yen) and needed to offload quickly—for that the Treasury market guarantees the best results.

Now that the Belgian buffer is depleted however, all eyes are on Chinese holding when the Treasury next releases the major foreign holders data in October.