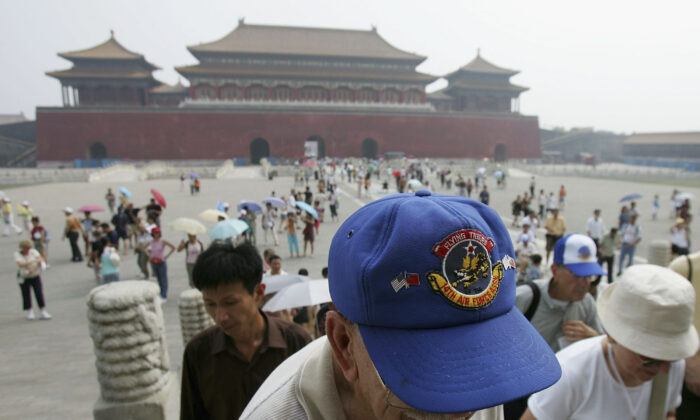 Retired U.S. Air Force pilots who carried out missions in China during World War II visit the Forbidden City in Beijing, China, on Aug. 14, 2005. A group of 270 World War II veterans from the U.S. who had supported the Chinese army to fight against the Japanese invasion, including members of the American Volunteer Group Flying Tigers, are visiting China to attend events celebrating the anniversary of the Anti-Fascist War victory. (China Photos/Getty Images)
Thinking About China

When China and America Were Friends

With the constant drone of anti-U.S. agitprop from Chinese Foreign Minister Wang Yi and Chinese state-run media, a person might think that Chinese animosity toward America has always existed. The communists’ venom and vitriol are blatant (examples here, here, and here), but they obscure that the United States and China were once friends and wartime allies—before the communists took over China in 1949.

Americans have been visiting, living, working, trading, and proselytizing in China from the earliest days of the American republic. The proselytizing aspect was critical.

During the Third Great Awakening (1855–1930), a period of maximum Christian activism in the United States, China was one of the countries targeted by American missionaries as part of a worldwide campaign that promoted Christianity and social change to non-Christian peoples.

The introduction of Christianity in China was a destabilizing factor, as Christian tenets conflicted directly with the patriarchal Confucianism that underpinned Chinese society, culture, and government for millennia. As a result, social change came hard, but that did not deter generations of American missionaries from performing mission work in China. Chinese laws were increasingly liberalized over time to facilitate the admission of foreigners into the country.

Chinese resistance to foreign presence led to the Boxer Rebellion (1900–1901), during which “The Society of Righteous and Harmonious Fists” (or “Righteous Hands”) targeted all foreigners, including Chinese Christians and American missionaries. After a joint U.S.-European military force defeated the Boxers, China was forced to repay the victorious nations, including the United States and Imperial Japan, further adding to Chinese resentment of the foreign presence in their country.

In 1908, as a gesture of goodwill to China, the United States remitted the $11 million remaining from the “Boxer indemnity,” and the ruling Qing Dynasty used the remittance to finance the education of 50 to 100 Chinese students in the United States per year.

Japanese aggression in China began in the early 20th century as part of their plan to develop a “Greater East Asia Co-Prosperity Sphere” dominated by Imperial Japan. Japan invaded Manchuria in 1931 after the Mukden Incident. It is believed that Japanese army officers planted a bomb on a Japanese-owned railway in Mukden that precipitated the Japanese invasion.

The Japanese aggression led to the “Stimson Doctrine,” in which then-U.S. Secretary of State Henry Stimson declared that “the United States would not recognize any agreements between the Japanese and Chinese that limited free commercial intercourse in the region.”

In short, the Japanese occupation of Manchuria pushed China and the United States together as de facto allies, setting the stage for an alliance during the coming world war.

The Marco Polo Bridge incident at Wanping in July 1937 precipitated the start of World War II in Asia, after which the Imperial Japanese Army occupied much of coastal China and engaged in bitter reprisals against Chinese noncombatants.

The United States sided with China as an extension of the Stimson Doctrine and placed diplomatic pressure on the Japanese to restore the integrity of China’s borders and sovereignty, which had no discernible effect on continuing Japanese atrocities, including the “Rape of Nanking” in December 1937 through early 1938 and the carpet bombing of Chongqing from 1938 to 1943.

Nanking was the capital of China at the time the atrocities were committed, and the Japanese executed an “estimated 150,000 male ‘war prisoners,’ massacred an additional 50,000 male civilians, and raped at least 20,000 women and girls of all ages,” according to some historians.

It’s noteworthy the Stimson Doctrine is eerily similar to the sanctions and other diplomatic measures placed on Russia after it invaded Ukraine. The ineffectiveness of the Stimson Doctrine in deterring a determined aggressor like Imperial Japan should have been a historical lesson learned that diplomatic and economic measures are futile measures against a determined adversary that only respects military force.

After the Imperial Japanese Navy attacked Pearl Harbor, the United States and China formed an official wartime alliance in 1942. The United States provided considerable material support to China throughout World War II, including through an extension of credits to the Chinese government and via direct military aid without strings attached–delivered through overland and air routes. A central supply line was provided via air over the Himalayas from India to China throughout the war to support Chiang Kai-shek’s Kuomintang-led Chinese Republic.

In addition, the American Volunteer Group (AVG) Flying Tigers were volunteer airmen from the United States and Britain. They manned the fighter aircraft that attacked Japanese bombers operating in East Asia during the early years of the war.

According to U.S. General Claire Lee Chennault, the founder of the AVG: “The group had whipped the Japanese Air Force in more than 50 air battles without a single defeat. With the R.A.F., it had kept the port of Rangoon and the Burma Road open for 2 1/2 precious months while supplies trickled into China … [and] gave both Chinese and American morale an invaluable boost at a time when it was sagging dangerously low.”

The Chinese helped Jimmy Doolittle’s raiders, who survived the carrier-launched B-25 bomber attack on Tokyo in 1942 and crashed in Manchukuo, the “protectorate” in northeast China that the Japanese then occupied. Doolittle’s raid and the assistance afterward provided to surviving U.S. airmen by local Chinese was dramatized in the 2019 remake of the movie “Midway.”

Eventually, the Stilwell Road was completed, which provided the main overland resupply route connecting Assam, India, with Kunming, China, in 1944. Some 44,000 Chinese troops supported British and American forces in defeating Japanese army forces to enable completion of the 1,000-mile road used to supply China for the rest of the war.

The contribution made by the Chinese people in winning World War II in the Pacific is a largely untold story in the United States. The Chinese fought the Japanese army for eight long years, tying down and preventing the Japanese military from completing other operations, including the likely invasion of Australia and possibly even India. As the Russians fought the Nazis on the Eastern Front, the Chinese army inflicted large numbers of casualties on the Japanese during a bitter war of attrition that had racial overtones.

The Chinese themselves suffered enormous casualties during the war. According to World Population Review: “China is estimated to have endured the second-highest number of total casualties in WWII. As many as 20 million people died in China, including up to 3.75 million military deaths and 18.19 million civilian deaths,” and 10 million died from war-caused famine and disease.

Contrast those numbers with the estimated 419,000 deaths suffered by the United States in battles fought in both the European and Pacific theaters of war.

A lifelong friend recently provided a laminated edition of The San Francisco Chronicle of Aug. 15, 1945. The articles were a remarkable journey back in time to help ascertain Americans’ emotions, issues, and opinions at that seminal moment in history—the day after V-J Day (Victory over Japan Day).

Here are some of the articles and announcements contained in that issue:

China and the United States were wartime allies during World War II, with America providing significant war material and logistics support to China from 1940 onward. Chinese forces bore the brunt of the land war in East Asia, suffering tragic losses, including millions of civilian deaths.

The goodwill that existed between the Chinese and American peoples was destroyed after the Chinese communists consolidated control of China in 1949. That mutual goodwill can be restored with the demise of the Chinese Communist Party—a mutual goal for all moral people in the world.