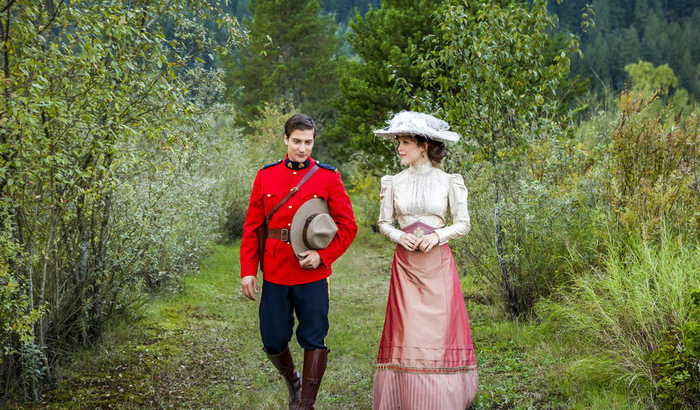 Erin Krakow as Elizabeth Thatcher and Daniel Lissing as Constable Jack Thornton in a scene from "When Calls the Heart." (Courtesy of Hallmark Channel)
Canadian Content

“When Calls the Heart” is a rare gem in today’s television fare. The family-friendly weekly series is a wholesome drama that all ages can watch together and enjoy on different levels. It airs Sundays at 8 p.m. on CBC.

Shot in Langley, B.C., the American-Canadian series is based on the first book in the “Canadian West” series of novels by Alberta author Janette Oke.

Set in the fictional town of Coal Valley in 1910, the show recounts the saga of Elizabeth Thatcher (Erin Krakow) who moves from under the protective wing of her family in the big city to her first teaching job in the small mining town.

Here, there is drama and an interesting mix of likeable characters and nasty folks. The bank owns everything and tries to run the town, while the “mining widows” work to keep their families together and food on the table after a number of husbands and sons are killed in an explosion at the mine. Overall though, the townsfolk understand the value of working together and helping each other when problems pop up.

Executive producer Michael Landon Jr. said that one of his goals was to make an uplifting family show as an alternative to the usual violence and risqué-laden fare seen in prime time. With “When Calls the Heart” he has succeeded.

Throughout the series there are some bad apples who do land in town, but they eventually gain some kind of insight and turn themselves around to become better people. In one episode, the local pastor openly confesses to the town his failing caused by jealousy. Such overt character improvement is not often seen in TV shows these days.

Constable Jack Thornton, a scarlet-jacketed Mountie played by Aussie Daniel Lissing—a famous singer/songwriter down under—provides the love interest. It’s his job to maintain order in the town and look after the young teacher. He does the latter reluctantly, believing that he was sent to the backwater town because Thatcher’s tycoon father wanted her to be safe. Thornton actually wanted to serve in a larger city that would be more challenging.

The townsfolk understand the value of working together and helping each other when problems pop up.

Initially the pair seems to irritate each other but over time, friendship and trust develop and by the end of the second season a young romance is germinating.

Thornton is a second-generation Mountie whose father also served on the force. He runs the jail, but the one cell is usually occupied by Rip (as in Rip Van Winkle), a stray dog that Thornton has adopted and who provides some company for the solo constable.

The show and its characters of all ages provide an interesting take on life in the muddy streets of frontier Canada.

The series was first aired on the U.S. Hallmark Channel in January 2014 and picked up on Super Channel in Canada that April. CBC began rebroadcasting the first season nationwide this summer. The earlier shows are available online for those who want to catch up.