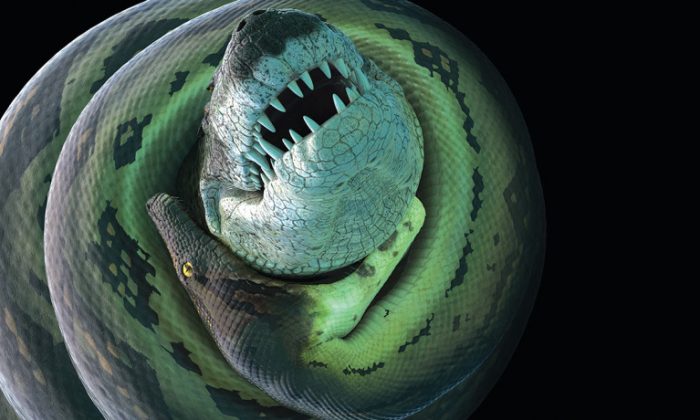 A new crocodilian species lived in freshwater rivers 60 million years ago, in close proximity to Titanoboa, a monster snake that would have been a formidable threat, says Jonathan Bloch. "Every once in a while, there was likely an encounter between Anthracosuchus and Titanoboa. Titanoboa was the largest predator around and would have tried to eat anything it could get its mouth on." (University of Florida)
Science

An ancient, 16-foot, 900-pound crocodile may have been overmatched by a monster snake that swam in the same rivers 60 million years ago.

The newly named reptile, Anthracosuchus balrogus, which had an unusually blunt snout for species in the dyrosaurids family, was unearthed from the same layer of rock as the 58-foot Titanoboa in the Cerrejon coal mine of northern Colombia.

The species opens a window to the early adaptability and diversity of tropical crocodyliforms, which may help scientists better understand how living crocodiles adapt to changing environments today, says lead author Alex Hastings, a postdoctoral researcher at Martin Luther Universität Halle-Wittenberg and former graduate student in the geological sciences department at the University of Florida and at the Florida Museum of Natural History.

“It quickly became clear that the four fossil specimens were unlike any dyrosaur species ever found,” he says.

The species’ short snout paired with large jaw muscles typical of dyrosaurids, would give it an incredibly powerful bite, Hastings says. “Everyone thinks that crocodiles are living fossils that have remained virtually unchanged for the last 250 million years. But what we’re finding in the fossil record tells a very different story.”

Researchers were stunned when they first saw the new species, says Jonathan Bloch, a coauthor of the study, published in the journal Historical Biology, and associate curator of vertebrate paleonotolgy at the Florida Museum.

“We couldn’t believe it had such a boxy, short skull and that it was still a dyrosaur,” he says. “It really busts the mold for these animals. It is such a completely different looking beast than we’ve seen for these crocodile-like animals.”

The study of dyrosaurids in Cerrejon is providing a better understanding of the early history of crocodiles in the Neotropics, says paleobotanist and coauthor Carlos Jaramillo of the Smithsonian Tropical Research Institute. “This new finding showcases the wide range of ecological variation that tropical crocodiles already had by 60 million years ago—much larger than modern Neotropical crocodile faunas.”

The animal is the third new species of ancient crocodilian pulled from Cerrejon, one of the world’s largest open-pit coal mines. Originating in Africa, the dyrosaurids swam across the Atlantic Ocean to South America about 75 million year ago. The family somehow survived the extinction event that wiped out the dinosaurs and persisted to become a top predator, Hastings says.

“This group offers clues as to how animals survive extinctions and other catastrophes. As we face climates that are warmer today, it is important to understand how animals responded in the past. This family of crocodyliforms in Cerrejon adapted and did very well despite incredible obstacles, which could speak to the ability of living crocodiles to adapt and overcome.”

The crocodyliforms that lived in the Cerrejon ecosystem during the Paleocene, when temperatures were higher than today, thrived and grew to enormous sizes, Bloch says. Dyrosaurids were commonly ocean-dwellers, but the new species lived in freshwater rivers, ate turtles and fish, and would have lived in close proximity to Titanoboa.

However, the giant snake would have been a formidable threat to A. balrogus with the tremendous grip of its constricting coils.

“Every once in a while, there was likely an encounter between Anthracosuchus and Titanoboa,” Bloch says. “Titanoboa was the largest predator around and would have tried to eat anything it could get its mouth on.”

The exceptionally short and robust snout of A. balrogus is probably related to its wide range of diet, says Stéphane Jouve, a paleontologist with the Natural History Museum of Marseille. Although some species of dyrosaurids have slightly different morphologies, only A. balrogus has a short and relatively wide snout that resembles some existing crocodiles.

“In the future, it would be interesting to determine if the short-snouted species forms an independent dyrosaurid group, or an intermediate morphology between the slender-snouted pholidosaurids and slender-snouted dyrosaurids,” he says.

These ancient species from the oldest rain forest are exposing the foundations of tropical ecosystems, Bloch says. A. balrogus was ecologically very similar to crocodiles in the Amazon today, while Titanoboa was somewhat like a modern anaconda—aquatically adapt, with a diet of crocodyliforms, turtles, and fish.