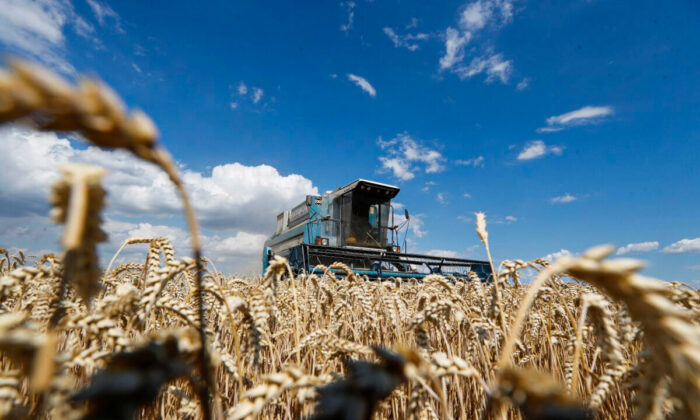 A combine harvester gathers wheat in a field near the village of Hrebeni in Kyiv region, Ukraine, on July 17, 2020. (Valentyn Ogirenko/Reuters)
Russia-Ukraine War

Global wheat prices fell by 6 percent on Friday following the announcement of a deal between Ukraine and Russia, bringing prices of the staple grain down to levels unseen since before the Russian invasion of Ukraine last February.

Representatives of Ukraine, Russia, and Turkey met in Istanbul on Friday to sign a deal that would unblock grain exports from ports on the Black Sea (the deal was also signed by U.N. General Secretary Antonio Guterres). The announcement of the deal earlier on Friday triggered a drop in grain prices, offering relief to consumers throughout the world.

At the outbreak of the war, there was widespread fear that the conflict could stifle essential wheat exports with disastrous consequences for dependent regions.

Both Russia and Ukraine are major exporters of grains. In 2020, Russia reigned as the world’s leading exporter of wheat with $10.1 billion worth of exports of the crop annually, with the much smaller Ukraine placing a respectable fifth place for wheat exports with $4.61 billion per year (Ukraine also places in the top five among exporters of corn and barley).

With the supply line disruptions and strangulation of shipping that followed the invasion, many experts expressed concern that the war could tighten the global grain supply, with especially dire consequences for the Middle East and North Africa, which rely overwhelmingly on grain exports from the two warring nations in Eastern Europe.

In the two weeks after the invasion began, wheat futures rose by 70 percent to a record high of $12.94 per bushel, triggering fears of food scarcity throughout the world.

Now, the crisis appears to be averted, as wheat futures have returned to normal, pre-war levels. On the Chicago Board of Trade, wheat futures fell to a low of $7.54 per bushel, the lowest level since Feb. 4. The low prices of wheat bode well for consumers already having to contend with near-universal global inflation, offering some relief for staples such as bread and other grain products.

The success of such a deal may suggest a transition in the nature of the Russo-Ukrainian war, as both factions recognize that the current nature of the conflict is unsustainable and pivot to a slow-burning approach to the conflict.

“Much like the conflicts in Georgia and Moldova, the war in Ukraine is becoming a frozen conflict, which could last for decades. The deal to unblock wheat exports may indicate that both sides recognize they cannot maintain tensions at the current degree indefinitely,” said geopolitical consultant Matthew Easton in a statement to The Epoch Times.

The deal also has significant implications for the regions which rely on Eastern European grain exports as a food staple, namely the Middle East and North Africa.

Turkey, which is currently in the midst of an inflation crisis far surpassing that of the United States, was one of the nations most threatened by the impact of the war on grain exports. It is little surprise, then, that Turkey has taken an active role in negotiations between the two factions, and the Anatolian republic has taken credit for brokering the new deal, which was signed in Istanbul on Friday.

“The deal likely comes in time to prevent widespread famine in the Middle East and North Africa. This may not deter migrants from citing famine as a reason for seeking refugee status, even though food security will likely be provided by the release of Russian and Ukrainian grain surpluses,” Easton opined.

The deal between Russia and Ukraine to release wheat exports may occasion sighs of relief throughout the Middle East and North Africa, but for citizens of the adversarial Slavic nations, it may be a more ambivalent omen.

Certainly, the economies of both nations will benefit from releasing grain surpluses to the global market, and the negotiations between Ukraine and Russia may suggest a return to normalcy of sorts.

However, this may also indicate that this conflict could drag on for much longer in a significantly reduced form, providing no clear resolution for the foreseeable future.