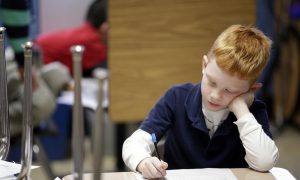 What’s Wrong With Our Schools? Short on Career Promises

This is the second part of a series exploring the decades-long national reform of public education.

NEW YORK—There’s something wholesome about being ready. It’s tied deep down to our notion of parenting. After all, we can’t live our children’s lives for them, so the next best thing would be to make them ready—ready to make the right decisions, make a living, and perhaps find happiness.

So what can be more appealing for a parent than a promise of readiness for the child? Ready to enter adulthood—get into a college and find a career—no less.

“We must ensure that every student graduates from high school well prepared for college and a career,” President Barack Obama stated in a 2010 outline of his education reform.

“Every student should graduate from high school ready for college and a career, regardless of their income, race, ethnic or language background, or disability status,” an Education Department paper called “A Blueprint for Reform” states.

In fact, the 45-page document mentions college and career readiness over 30 times.

But ready for what college? And what career? And what if some don’t even care for college?

The idea of “college and career readiness” was proliferated by Achieve, a nonprofit set up to check how states progress on making their education standards and tests tougher. It was founded as a result of the 1996 Education Summit by governors and business leaders.

The general sentiment of the summit was that American children are not learning enough. Louis Gerstner, then chief executive officer of IBM and later Achieve’s board chair, complained at the summit about what a pain it is for businesses to teach incoming high school graduates to “read and to compute and to communicate and to think.”

President Bill Clinton stopped by to express support, saying, “We can only do better with tougher standards and better assessment.”

Yet the idea was still based on voluntary understanding, not mandates. “Summit participants emphasized that they are not trying to dictate what or how students should learn—decisions that rightfully should be made locally by educators and parents,” a review of the summit states.

Today, “Achieve is proud to be the leading voice for the college- and career-ready agenda, and has helped transform the concept of ‘college and career readiness for all students’ from a radical proposal into a national agenda,” its website states.

So how did a nonprofit become the leading voice on the course of the nation’s public education?

In 2001, Achieve partnered with three other nonprofits: The Education Trust, dealing with closing the achievement gap between the rich and poor; the National Alliance of Business (NAB), battling unemployment; and the Thomas B. Fordham Institute, an education policy think tank.

NAB perished a year later, but the remaining three organizations continued their quest to “identify the ‘must-have’ knowledge and skills most demanded by higher education and employers.”

In 2004, they released a report titled “Ready or Not: Creating a High School Diploma That Counts.” Their conclusion was that high schools need to “inextricably link” their diplomas to “expectations and the intellectual challenges that graduates invariably will face in credit-bearing college courses or in high-performance, high-growth jobs.”

“We first asked leading economists to examine market projections for the most promising jobs—those that pay enough to support a small family and provide real potential for career advancement—and to pinpoint the academic knowledge and skills required for success in those occupations,” the report states.

“We also worked closely with two- and four-year postsecondary leaders in the partner states to determine the prerequisite English and mathematics knowledge and skills required for success in entry-level, credit-bearing courses in English, mathematics, the sciences, the social sciences and humanities.”

They found that there actually is certain “core” knowledge useful at many colleges and at many good jobs.

Three years later 30 states were on board with the idea. And then, in 2009, Achieve sealed the deal with Obama’s announcement of the Race to the Top, a grant program promising over $4 billion to crisis-stricken states if they align their education policy with the grants’ requirements.

One of the demands was to adopt “common standards” that “build toward college and career readiness.”

Sure enough, Achieve was just about to finish a set of education standards fitting perfectly the grants’ requirements, aptly called “the Common Core State Standards,” embodying the nonprofit’s ideal of “college and career readiness.”

Leaving the question of college aside (as that will be the topic of the next part of this series), does the Common Core prepare one for a career?

In 2006, a coalition of several nonprofits asked a dozen human resources and other executives what they expect from new employees coming either straight from high schools, or with different college credentials.

Among high school and two-year college graduates, employers’ No. 1 concern was professionalism and work ethics.

Half of them saw high school graduates as deficient in math, but only a third thought math was very important for straight-out-of-high-school workers.

What they cared about though were communication skills. Even for entry-level low-requirement jobs, one needs to know how to present oneself and answer questions clearly.

An example of a high school project showcasing an ability to work in a group can go a long way with some employers.

As for writing, however heart-wrenching it may be to connoisseurs of quality literature, employers need workers ready to write memos, business letters, and reports, rather than critical essays.

The Common Core, on the other hand, focuses more on what would be expected in a typical community college. It caps high school math to algebra, leaving out calculus, which leaves students short on the knowledge needed to enter technical colleges like MIT.

It focuses though on more complex word problems and strengthening of the basics, which may help students to deal with the practical math they may face as rank-and-file employees.

In English, the Common Core demands half of the reading in lower grades to be nonfiction, like newspaper clips and magazine articles. In higher grades nonfiction should be 70 percent.

With writing, it concentrates on “argument essays” and “explanatory essays” based on “evidence,” at the expense of writing based on experience or imagination. That, again, largely focuses on what a community college student would face.

To get familiar with the menial work-related literature, students are supposed to read manuals, even public transit schedules, though much less emphasis is put on such tasks.

David Coleman, one of the lead writers of the Common Core, said the core principle of the standards was to “focus on what mattered most and to erase much of which surrounded it,” during his keynote at the 2011 Institute for Learning Senior Leadership Meeting.

Meredith Liben, another writer of the Common Core, acknowledged the standards weren’t designed to prepare everyone for everything. “They sort of state what minimum proficiency should be,” she said in a phone interview.

But Coleman suggested the Common Core is too robust already to add more demands on top of it.

“We do not have the resources, leisure, or time to invest in a whole new set of initiatives around these Common Core standards,” Coleman said.

It seems if one piles up everything that is “common,” one ends up with not much room for anything else. But if we’re focusing just on the intersection of all different college and career demands, doesn’t it mean we’re failing to prepare anyone for anything fully?

More Than One Way

In 2011, the Harvard Graduate School of Education researchers looked into previous studies of labor market expectations and compared them with the education Americans are actually achieving.

“Nearly 70 percent of high school graduates now go to college within two years of graduating. But … only about 4 in 10 Americans have obtained either an associate’s or bachelor’s degree by their mid-twenties,” their study, called “Pathways to Prosperity,” states.

“Given these dismal attainment numbers, a narrowly defined ‘college for all’ goal—one that does not include a much stronger focus on career-oriented programs that lead to occupational credentials—seems doomed to fail.”

The College Board, which creates the SAT tests, is currently led by David Coleman. The board wants to see 55 percent of young Americans getting a college degree by 2025—an optimistic goal the Harvard researchers note. But “what about the other 45 percent,” they ask.

It is expected that two out of three jobs in the United States will require at least some college in 2018, according to the Center on Education and the Workforce forecasts. Yet only one in three actually requires a bachelor’s or higher degree and less than one in eight waits for a holder of an associate degree.

The majority of jobs would only require a professional certificate or simply a high-school diploma. But such jobs usually offer unimpressive incomes and a prospect of half of Americans having to settle for those may be discomforting.

“The U.S. likes to pretend it’s a class-free society, but we’re not,” Meredith Liben said. “We’re not honest about that.”

The Harvard paper calls for copying models of many European countries, where children are steered toward career pathways right after middle school, sometimes even earlier. But such approach has had a hard time taking root in the homeland.

“The U.S. has always been very proud that it doesn’t do that kind of sorting,” Liben said.

Problem is, not every child has the same set of strengths, so treating everyone the same, however equal it seems, may backfire.

“We keep them in the same classes but we don’t teach them very well, so that they end up not being prepared for anything,” Liben said.

The Common Core, she said, has “not directly addressed that kind of inequality.”

The American school system used to have multiple tracks: vocational, college prep, and general. But the vocational schools had been criticized for decades not only for having low academic standards, but also for being disconnected from the job market. Some even suggested abandoning them altogether.

There are 45 of them in New York City and about a thousand nationwide, that is less than 4 percent of all public high schools.

Several years ago a new breed of vocational schools, properly called Career and Technical Schools (CTEs), was born. They try to make up for the faults of their predecessors by providing… well, college and career readiness.

An example may be the P-TECH in Brooklyn, preparing its students both for technical colleges and jobs with IBM—it’s main partner. President Obama visited the school last year.

Another may be the City Polytechnic High School of Engineering, Architecture, and Technology where students earn a diploma in three years and can seamlessly continue in a two-year associate degree program at the New York City College of Technology—with zero tuition. Education Secretary Arne Duncan recently gave a kudos to the school.

But despite their promising outcomes, students nationwide have taken fewer and fewer CTE courses in high school since 2000, Education Department data shows.

CTE schools get occasional praise from all levels of government: President Obama, Secretary Duncan, Gov. Andrew Cuomo, and Mayor Bill de Blasio. Yet tangible initiatives to promote them are still few and far between.

In the next part, we will look into the education reform’s promise of college preparation.