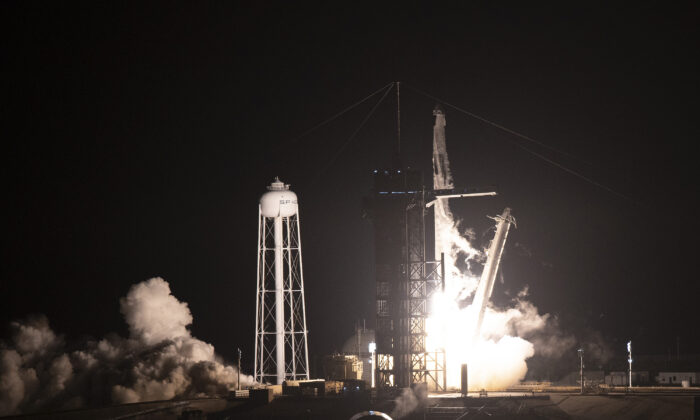 SpaceX Falcon 9 rocket with the Crew Dragon spacecraft lifts off from launch pad 39A at the Kennedy Space Center 2021 in Cape Canaveral, Fla., on Nov. 10, 2021. (Joe Raedle/Getty Images)
Space

What’s Up? The Cosmic Space Missions Expected in 2022

“2021 turned out to be a big newsy year in space, no doubt about it, but 2022 is going to continue that momentum and maybe even amp it up a little bit,” says AP’s Cape Cansveral correspondent Marcia Dunn.

“There’s lots going on with more people on the verge of launching into space, both for NASA and regular people on tourist flights out of here, and elsewhere. And the asteroids, Mars, a mission to Jupiter, potentially. There’s a lot to look forward to in 2022.”

Last month, NASA delayed putting astronauts back on the moon until 2025 at the earliest.

But the U.S. space agency is still targeting the first part of 2022 for the first test flight of its moon rocket, the Space Launch System, or SLS, with an Orion capsule. No one will be on board.

“That’s the future. That’s what NASA hopes to launch for the first time in 2022. The SLS rocket with an Orion capsule, empty on top, no people, but it’s going to pave the way for crews to return to the Moon,” says Dunn.

That won’t be the only lunar-bound spacecraft in 2022. Several countries are planning to send rovers and landers to the moon, including the Japan and the UAE.

“But there are going to be the precursors, these robots, to sort of check the place out, to see, to learn more about what’s in store for the astronauts who will be living there, hopefully one day.”

But there was meant to be a third—in March 2020, the European Space Agency and Russia’s Roscosmos said they were postponing a planned joint mission to Mars until 2022.

The mission’s goal is to put a rover on the red planet to help determine whether there has ever been life on Mars.

Scientists hope the rover, packed with high-tech instruments and named after British chemist Rosalind Franklin, will be able to dig for biological signatures of life below the martian surface and provide further insights into the planet’s history of water.

“Everything’s looking good for the Russian launch of the European Mars mission. They’re going to attempt to put a rover on Mars,” says Dunn.

“Now, Europe and Russia have tried before to land successfully, a spacecraft on Mars, hasn’t happened yet, and all fingers are crossed for the 2022 mission.”

2021 might be remembered as the year space tourism truly blastoff. There were launches by the likes of Jeff Bezos and Richard Branson, and SpaceX launched four amateurs on a private Earth-circling trip.

Dunn says SpaceX founder Elon Musk is unlikely to be following Bezos and Branson into space, he’s concentrating on the company’s futuristic, bullet-shaped Starship. A test flight is planned for early 2022.

“He’s more concerned about making sure that humans become multi-planetary. And to do that, that’s why he’s working on his Starship out of Texas,” says Dunn.

“While he says he’d like to launch, it’s not about him, it’s not going to be happening anytime soon. So, no more billionaires launching themselves to space on their own rockets in 2022, at least from what we know today.”

Japanese fashion tycoon Yusaku Maezawa and his producer recently visited the International Space Station, the first visit by self-paying space tourists to the orbiting outpost in more than a decade.

Dunn says the promise of 2022 is to put more “regular people” into space.

“So far, it’s just been rich people or highly-trained astronauts, and I think 2022 is really going to open up the frontier to a lot more regular people, the customers of all these space companies,” she says.