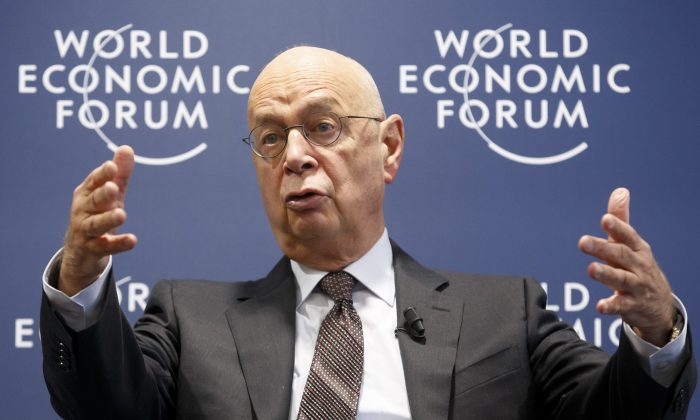 German Klaus Schwab, founder and president of the World Economic Forum (WEF), speaks during a press conference in Cologny, near Geneva, Switzerland, on Jan. 13, 2016. (Salvatore Di Nolfi/Keystone via AP)
Viewpoints

What’s the Ultimate Goal of ‘Climate Change’ and COVID Lies?

The minute they switched “global warming” to “climate change,” you knew they were lying.

Well, you knew it if you cared about the concept formerly known as “science.” You knew that you were being manipulated and lied to through the promulgation of new code words that would be used to obfuscate.

What was going on was obvious. They meant “global warming,” unless it was inconvenient, unless there was suddenly “global cooling.” Then, it was “climate change.” Nevertheless, it would still be humanity’s fault—your fault.

That was also a not-so-subtle salvo against “freedom of speech,” without which real science can’t exist.

Timeout for some real science, in case you missed it:

Interesting, no? You should read it all.

And yet “climate change” (warming, in English) marches on as if it were indisputable, even if it had and has myriad fallacies, not just the one from The Heartland Institute research in the above paragraph. Greenpeace founder Patrick Moore has demonstrated this thoroughly.

Although “climate” scores near the bottom of voter concern in polling, the necessary brainwashing (mass formation psychosis, if you will) has already been completed.

You can see the results in energy policies that are currently destroying Europe and, only to a slightly lesser extent, our country. California is already on “flex plans,” its leaders drunk on the reactionary chimera of electric cars that benefit only China for its monopoly on rare earths, not to mention solar panels.

“Be Green or You’re Mean!” might as well be the slogan of our reactionary left, but think what that did and does to actual scientific inquiry.

It did, however, prepare the ground for what happened with COVID-19, creating obedient, sheep-like masses ready to follow the prescriptions of Drs. Fauci, Birx, and others, as radically inconsistent and often nonsensical as they were.

An uneducated public in the sciences didn’t help. The same could be said of most politicians who were also, for the most part, similarly uneducated and already bought by Big Pharma and Big Tech anyway, no matter what pronouncements the pols made for public consumption. Their actions weren’t much, if they existed at all.

Meanwhile, our hospitals and their treatments were under federal government diktats that largely funded them—ditto scientific research as we learned years ago, when climate scientists altered their data to please their government benefactors.

Climate change, COVID … where is this all headed, this seemingly deliberate dumbing down of science and, therefore, the public, rendering us devoid of personal agency?

Is depopulation the ultimate goal?

What could be more cynical? Only Ian Fleming could have dreamed this up because only Bond villains are so monstrous and yet, what other conclusion can we come to?

Will Social Security and pension plans—in all countries, not just ours—be worth anything as the population decreases? They depend on increases to survive. These so-called elitists have been plotting global impoverishment and, with that, depopulation, starting with “climate change” and probably before.

I’m not sure how we counter this, but anyone supporting the globalists must be voted out. That, of course, includes their clueless supporters in the Democratic Party who, in many cases—believe it or not, because it’s right in front of our noses—seem unaware of what’s happening.

The world of Bill Gates and Klaus Schwab and the other Bond villains must be stopped.