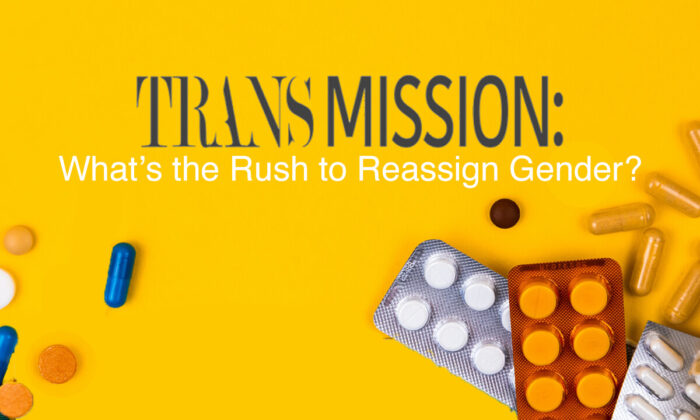 (The Center for Bioethics and Culture Network)
Viewpoints

What’s the Rush to Reassign Gender and to Silence Those Who Ask?

“We ought to think very hard about what and who is driving this extreme transactivist agenda,” is probably the most important line in the recently released film, “Trans Mission: What’s the Rush to Reassign Gender?”

Produced by Jennifer Lahl, founder and president of The Center for Bioethics and Culture Network, and written and directed by Lahl and Kallie Fell, “Trans Mission” is a fast-paced, tour de force film, covering the advancements of transgender ideology through American culture, from its burgeoning roots in 2014, when Laverne Cox was rolled out on the cover of Time magazine, announcing a transgender tipping point, to the present moment.

Encompassing the many iterations of the gender industry, in under one hour, “Trans Mission” documents experts, activists, parents, and educators discussing the medical and surgical transitioning of children.

What’s unexpected in “Trans Mission,” and truly shocking, is Lahl’s penetrating gaze on what’s been happening behind the scenes of the gender industry—everything we don’t see in mainstream media.

All the things we didn’t know, because mainstream media, especially platforms on the political left, refuse to print anything but a carefully constructed positive narrative of changing gender, are laid bare in quick succession: the pain of children who don’t fit strict sex-role stereotypes, who are then led down a path of transition; the explosion of gender clinics in the United States and elsewhere; and the exponential rise in young girls presenting to clinicians with gender dysphoria.

Before we can catch our breath, Lahl is documenting clinicians discussing the harmful effects of drugs being used on young children to stop their natural growth processes, done to support an ideology.

The pain experienced by parents of young people caught up in the cultish behavior supporting transitioning, driven by social-media culture, is visceral. They face the sudden erratic and inexplicable behavior of their teens wanting wrong sex hormones and surgeries, convinced they’re the opposite sex, upending their families.

On other fronts, parents must contend with teachers at their children’s schools, and medical professionals, who treat them as crazy for knowing something is very wrong, or for pursuing questions.

We find a medical establishment, school districts, and entire families captured by an ideology that sells the impossible and hides the harms being generated in ignoring that it’s a fiction that anyone can actually change sex.

Professionals in psychiatry, invested in gender-affirming medical treatment (transitioning) as an option for children, are given a voice in “Trans Mission,” but they can’t compete with the damage so obviously wrought by this ideology on families and young people, damage that nearly leaps out of the screen.

Detransitioners—those who have made the medical gender transition journey and returned, with voices and bodies forever altered, their fertility often destroyed—are enough to make a staunch advocate of gender transition quake at the knees.

What are we allowing to happen to these kids? How can we let it happen?

More importantly, as Gary Powell, European special consultant to the Center for Bioethics and Culture, said, “We ought to think very hard about what and who is driving this extreme transactivist agenda.”

Crucial information is being withheld from the public, journalists are being censored, events for discussing changes in our culture are being canceled, and universities are disinviting guests who they come to find have made critiques of gender identity ideology.

Why? Where can all this be leading for young people caught up in this ideology, establishing themselves as life-long medical patients, and for their families whose lives have been radically and forever altered?

Can medical, educational, and cultural institutions captured by such a dangerous, profitable ideology be uncaptured? How? How will we get there if we are refused a platform?

Lahl hasn’t the patience to find out. She has refused to be silenced, has forged ahead with a dynamic look at the interior workings of a culture taken by a perfect storm. Children are beguiled by positive media representations of transitioning gender, the negative medical impacts are being censored by the media, and the medical industry is profiting from the medical markets that have opened.

“Trans Mission” has forged a path ahead of, or despite, mainstream media, driving knowledge and amplifying voices that must be heard. It’s up to us to take the next steps, to listen, to hear, and to act.

Jennifer Bilek is an artist and investigative journalist tracking the forces behind the gender identity industry. She writes at The 11th Hour Blog.