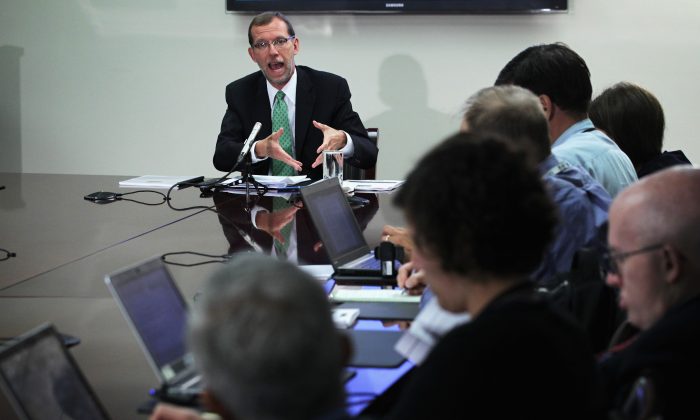 Congressional Budget Office Director Douglas Elmendorf speaks as he briefs members of the media August 27, 2014 in Washington, DC. Elmendorf held the briefing to release 'An Update to the Budget and Economic Outlook:2014-2024.' (Photo by Alex Wong/Getty Images)
Business

What’s the Point of the CBO’s Wrong Forecasts?

Yesterday was a slow news day. So the updated GDP forecasts of the Congressional Budget Office (CBO) made headlines, even though they are really not that exciting.

What is funny and therefore exciting is the historic incompetence of the CBO to forecast anything correctly. Whether it’s GDP, budget deficits or unemployment, the CBO forecasts underlie the broken clock principle: it’s right twice a day, or in the CBO’s case maybe twice a decade.

Before we go into some detail of past mishaps and possible future failures, let’s see take a look at what the CBO actually is. According to its website:

“The agency is strictly nonpartisan and conducts objective, impartial analysis, which is evident in each of the dozens of reports and hundreds of cost estimates that its economists and policy analysts produce each year.”

Its objective is to “support the congressional budget process,” and it claims to hire people “solely on the basis of professional competence, without regard to political affiliation.”

Maybe it would make sense to select staff based on political affiliation because they are not very competent in making forecasts.

Today’s reduction in its estimate for 2014 GDP growth from 3.1 percent (the original estimate in February) to 1.5 percent is just a small example. The CBO had to admit it was more than 50 percent off in just six short months. Yes, the winter was harsher than usual, but data is seasonally adjusted and the miss was large even given the bad weather.

Humans have always struggled with predicting the future, and making financial forecasts is notoriously difficult. To its credit, the CBO humbly accepts this fact: “The agency’s goal is to develop estimates that are in the middle of the distribution of possible outcomes and to communicate clearly the basis for those estimates and the uncertainty surrounding them,” it says on its website.

However, that does not excuse it from merely extrapolating short term trends and hoping for the best, as it did in 2001 when the government had just racked up a couple of years of fiscal surpluses. Despite the impeding recession, the CBO merely extrapolated this trend and projected surpluses straight throughout 2011, reducing debt held by the public to 4.8 percent of GDP. Well, we all know how this went.

Sometimes, the CBO also errs on the upside. In its outlook released for January of 2012, it assumed the unemployment rate would stay elevated at around 8 percent throughout 2014. Right now it’s 6.2 percent although the CBO rightly said this was due to a decrease in the labor force participation rate and not due to large numbers of jobs added, although it expressed it slightly more eloquently and clearly.

“Had that portion of the decline in the labor force participation rate since 2007 that is attributable to neither the aging of the baby boomers nor the downturn in the business cycle (on the basis of the experience in previous downturns) not occurred, the unemployment rate in the fourth quarter of 2011 would have been about 1.25 percentage points higher than the actual rate of 8.7 percent.”

As for the future, the current report (projections are until 2024) is just one giant trend extrapolation exercise. Federal government outlays will rise slightly, while revenues remain almost completely flat. The labor force, employed and unemployed people will fall in numbers, GDP will grow by 2 percent most years and inflation will rise slightly.

When looking at the charts, it is interesting to see the volatility in the actual numbers and the tranquil calm the CBO projects.

So why does the tax-payer award the 230 CBO staff handsome salaries given this dismal track record? For the same reasons Wall Street banks get large commissions for advising companies on the correct pricing of M&A deals: In spite of estimates are horribly wrong most of the time, somebody has to do it. And as of yet, there aren’t too many people around who could do a much better job at it.