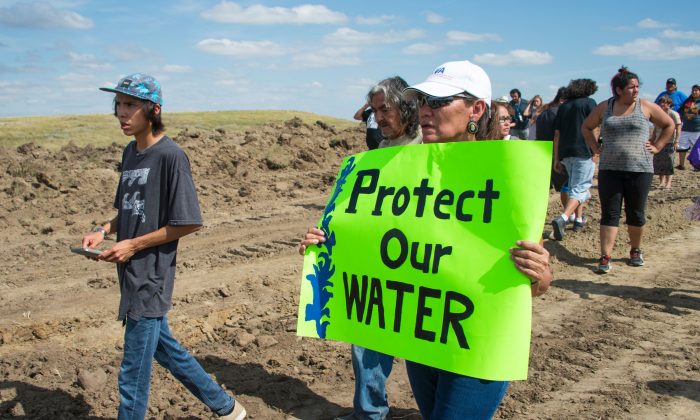 A protester holds a sign reading "Protect Our Water" as Native Americans and their supporters walk on land designated for the Dakota Access Pipeline (DAPL), after protestors confronted contractors and private security guards working on the oil pipeline project, forcing them to retreat, near Cannon Ball, N.D., on Sept. 3, 2016. (Robyn Beck/AFP/Getty Images)
US

BISMARCK, N.D.—After months of protests by the Standing Rock Sioux and other Native Americans, a federal judge denied the tribe’s request to stop construction of the four-state, $3.8 billion Dakota Access Pipeline (DAPL). But the federal government quickly stepped in Friday by stopping work on one section and asking the pipeline company to do the same on a larger 40-mile swath. Here’s a look at the planned pipeline and the ongoing protests:

Owned by Dallas-based Energy Transfer Partners, the $3.8 billion, 1,172-mile project would carry nearly a half-million barrels of crude oil daily from North Dakota’s oil fields through South Dakota and Iowa to an existing pipeline in Patoka, Illinois, where shippers can access Midwest and Gulf Coast markets. Announced in 2014, supporters said the pipeline would create more markets and reduce truck and oil train traffic—the latter of which has been a growing concern after a spate of fiery derailments of trains carrying North Dakota crude.

The Standing Rock Sioux’s lawsuit challenged the U.S. Army Corps of Engineers’ decision to grant permits at more than 200 water crossings. Filed on behalf of the tribe by environmental group Earthjustice, the suit says the project violates several federal laws, including the National Historic Preservation Act, and will disturb sacred sites outside of the 2.3-million acre reservation.

The lawsuit alleged that the pipeline, which would be placed less than a mile upstream of the reservation, could impact drinking water for more than 8,000 tribal members and millions who rely on it downstream. A separate lawsuit filed Thursday by the Yankton Sioux tribe in South Dakota challenges the same thing. ETP says the pipeline includes safeguards such as leak detection equipment, and workers monitoring the pipeline remotely in Texas could close block valves on it within three minutes if a breach is detected.

Since April, there’s been a tribal protest—held mostly by members of the Standing Rock Sioux —at the confluence of the Cannonball and Missouri rivers. It’s grown considerably, as they’ve been joined by other American Indians and other, non-Native Americans from across the country, including celebrities such as “Divergent” actress Shailene Woodley. Nearly 40 have been arrested as the protest has grown in size, including Standing Rock Sioux Tribal Chairman David Archambault II. None of the arrests stemmed from Saturday’s confrontation between protesters and construction workers.

Will Growing Our Fuels Drive Us to a Cleaner Future?

Last weekend, tribal officials said crews bulldozed several sites of “significant cultural and historic value” on private land, which Energy Transfer Partners denies. It led to Saturday’s clash between protesters and private security guards; law enforcement officials said four security guards and two guard dogs were injured, while a tribal spokesman said six people were bitten by the dogs and at least 30 people were pepper-sprayed. Earlier this week, U.S. District Judge James Boasberg partially granted the tribe’s request to temporarily stop work near Lake Oahe to prevent the destruction of more sacred sites, but not on the private land that sparked the protest.

MINNEAPOLIS (AP)—A federal judge in Washington on Friday denied an attempt by the Standing Rock Sioux tribe to halt construction of the disputed Dakota Access oil pipeline that passes near its reservation in North Dakota. Here’s a look at some key points from U.S. District Judge James Boasberg’s 58-page opinion:

“This Court does not lightly countenance any depredation of lands that hold significance to the Standing Rock Sioux. Aware of the indignities visited upon the Tribe over the last centuries, the Court scrutinizes the permitting process here with particular care. Having done so, the Court must nonetheless conclude that the Tribe has not demonstrated that an injunction is warranted here.”

The tribe argued that the U.S. Army Corps of Engineers had a duty under the National Historic Preservation Act to consult with the tribe before issuing a permit for the pipeline, but the judge wrote that the corps probably has complied with the law. He also said the tribe hasn’t shown it will suffer any harm that the court has the authority to prevent. So he denied the request for an injunction.

Contrary to the tribe’s assertions that it was left out of the process, Boasberg said, the corps has documented dozens of its attempts to engage with Standing Rock officials in consultations to identify historical resources at Lake Oahe and other places covered by the permit. The corps was not required to consider the effects along the entire pipeline route because the corps has jurisdiction only where the route crosses water, he noted.

Texas-based Energy Transfer Partners and the corps gave Standing Rock officials several chances to weigh in in 2014, but tribal officials didn’t take advantage of those opportunities, the judge wrote. Relations between the tribe and corps didn’t improve in 2015, when tribal officials canceled several meetings, according to the ruling.

“Suffice it to say that the Tribe largely refused to engage in consultations,” he wrote. “It chose instead to hold out for more—namely, the chance to conduct its own cultural surveys over the entire length of the pipeline.”

The tribe did provide timely and extensive comments earlier this year on a draft environmental assessment, and the corps and tribe held several meetings to discuss the cultural surveys, the judge wrote.

Ninety-nine percent of the route for the Dakota Access pipeline crosses private land, and 48 percent of it has already been completed, the ruling noted. Most of the route doesn’t require a federal permit—only the 3 percent that crosses streams and other waters in more than 200 places.

The ruling said Dakota Access hired professional archaeologists to survey the entire route through the Dakotas and much of Iowa and Illinois for cultural resources. When the surveys revealed previously unidentified resources, the company changed the route on its own 140 times in North Dakota alone to avoid them, the judge said, and the corps ordered the company to change the route where it crossed the James River to avoid burial sites there.