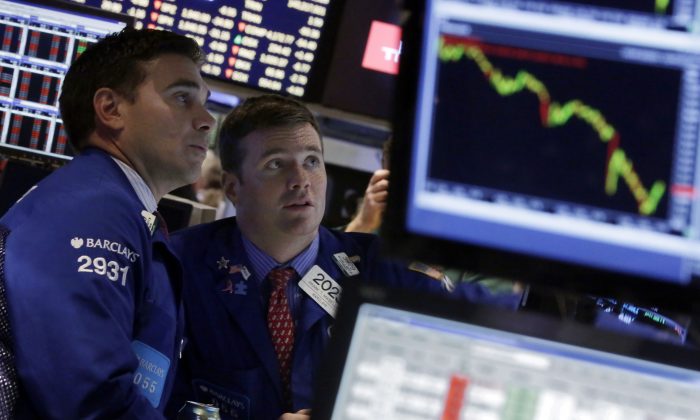 Specialists Robert Tuccillo (L) and Frank Masiello work on the floor of the New York Stock Exchange on Oct. 15, 2014. The market took investors on a wild ride this week. In fact, at one point on Wednesday, the Dow Jones industrial average plummeted 460 points, but pared most of those losses by the end of the trading day. Investors are now wondering what's next for the market. (AP Photo/Richard Drew)
Business & Markets

What’s Next After Wild Week for Stock Market?

Temperamental, flighty, prone to violent mood swings, the market took investors on a wild ride this week. From one day to the next, even within a few hours, stocks swung from despair to optimism, deep losses to big gains.

The Dow Jones industrial average plummeted 460 points at one point Wednesday, but pared most of those losses by the end of the trading day. On Friday, it surged 263 points. The difference between the Dow’s high and the low for the week was the largest in nearly three years.

Investors seemed buffeted from every corner: Plunging oil prices, signs of a slowdown in Europe and fear of Ebola on the downside; strong corporate earnings and reassuring jobs market figures on the upside.

Here’s a look at the factors driving the manic trading, and the outlook for next week:

Investors are afraid that Europe could slip into another recession, perhaps deeper than the one it emerged from just a year ago, and the slowdown could cut into U.S. corporate profits.

The bad news from Europe started piling up earlier this month. Germany, the region’s biggest economy, said that manufacturing output fell. The International Monetary Fund cut its estimate of 2014 growth in the eurozone to an anemic 0.8 percent. Then came news on Tuesday that industrial production for the 18-country region plunged in August, and people really got spooked.

The Chinese economy, the world’s second largest, is slowing, too.

“Can the U.S. continue to recover if the major drivers of the global economy— Europe and China — continue to struggle? I don’t think so,” said Bell Curve’s Strazzullo. “I think we’ll have subpar growth and you’ll see that in the lower equity prices.”

Even some optimists are worried.

“In this slowdown, it’s more serious,” said Mark Vitner, senior economist at Wells Fargo Securities, referring to the eurozone. “It’s Germany and France, not just the periphery countries (like Greece), that are causing the damage.”

Still, Vitner added, the danger to the U.S. is easy to exaggerate. He noted that the U.S. is a relatively closed economy. Only 14 percent of U.S. economic output comes from exports, one of the lowest such shares in the world.

One measure of trouble in the eurozone to watch is its purchasing managers’ index, a broad gauge of business activity. The next reading comes out Thursday.

Benchmark U.S. crude closed at the $82.75 a barrel on Friday, one its lowest prices in years. The drop has hammered energy companies this month. Two Dow members, Chevron and Exxon Mobil, have fallen 6 percent and 3 percent, respectively.

Ultimately, the drop in oil could be good for stocks, though. That’s because a fall in prices means drivers will end up paying much less to fill up their tanks, leaving them more money to spend on other things, like travel and clothes and dinners out.

Gas at the pump has already fallen to less than $3 a gallon in some parts of the country, noted USAA Investment Assistant Vice President John Jares in a report on Wednesday. He wrote that the drop in gas could prove a “boon to retailers” in the holiday shopping season, and cited it as one reason USAA mutual funds were buying stocks this week.

A pickup in spending would sure help calm investor nerves.

One of the triggers for the sickening 460 point drop in the Dow on Wednesday was a report showing retail sales declined 0.3 percent in September from the previous month. Purchases of autos, gasoline, furniture and clothing all slowed.

“The economy remains stuck on the same shallow growth trajectory that has been in place for the past several years,” economist Steven Ricchiuto of Mizuho Securities wrote to clients shortly after the numbers came out Wednesday.

Still, it’s important to put the bad news in context. The U.S. economy is in the best shape in years. Employers are hiring at the strongest pace in 15 years and most economists expect the U.S. to grow a healthy 3 percent this year and next.

In the end, you can talk your head off about the state of the global economy and the U.S. consumer. But the biggest driver of stocks is earnings.

Exhibit A: The blowout profits reported by General Electric and Textron on Friday, which helped propel the Standard and Poor’s 500 index up 1.3 percent.

The other good news is that companies in the S&P 500 seem reasonably valued based on average earnings forecasts by financial analysts. The index is trading at 15.1 times its expected earnings per share over the next 12 months, according to S&P Capital IQ, a research firm. That is slightly lower — meaning cheaper — than the average of 16.4 since 2001.

But financial analysts are a notoriously over-optimistic bunch. For all of next year, they expect earnings to rise 11.5 percent, more than double the expected growth rate in the quarter just ended.

How likely is that?

Investors will get a clearer view next week when 127 companies in the S&P 500 report third-quarter earnings and, more importantly, talk about prospects for the future. Among those reporting are Apple, Procter & Gamble, Boeing and Ford.

“It’s a good time to buy,” said Warren, who bought Google as it tumbled 6 percent this week. “I think earnings are going to ride to the rescue.”