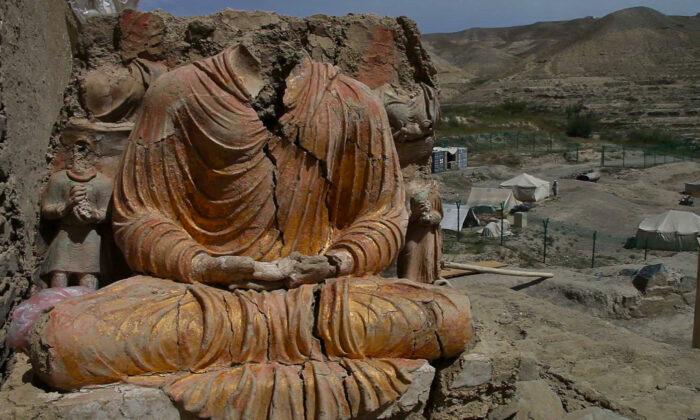 Brent E. Huffman, the director of “Saving Mes Aynak,” an acclaimed documentary about efforts to preserve a 5,000-year-old settlement containing Buddha statues, paintings, and other artifacts near Kabul, is concerned about the fate of Afghanistan’s cultural heritage under the Taliban.

The archeological site of Mes Aynak sits on top of the world’s second-largest body of copper ore, whose lease was granted to Chinese companies more than a decade ago but which has remained largely unmined due to threats from insurgents. With the Taliban coming to power and with the CCP hinting at providing support to its government, the situation could soon change.

Huffman told The Epoch Times in an email that what’s happening in Afghanistan is the biggest threat to archeological heritage happening in the world today.

“People who work in cultural heritage could be killed by the Taliban, and ancient sites could all be looted and destroyed. The history of Afghanistan could be lost forever,” Huffman said.

The ancient remains of Mes Aynak are located on a way-station in the ancient Silk Route over copper pit mines with billions of dollars in mineral reserves. It’s about 25 miles from Kabul, which the Taliban took over on Aug. 15.

Two Chinese companies, China Metallurgical Group (MCC) and Jiangxi Copper Company Limited, were granted a 30-year lease for the copper mine for $3 billion in late 2007, and Huffman’s documentary follows the journey of an Afghan archeologist who “races against time” in the initial years of the lease to save the site from “imminent demolition.”

The mining work was stalled and so the site still remains undeveloped. Last year, eight Afghan security guards were killed at a mine checkpoint under Taliban attack. It was the third attack on the site by the Taliban.

To ensure its security from the insurgents, including the Taliban, the Afghan government had deployed 1,750 policemen at the site with 84 checkpoints and security towers.

Many international archeologists, Afghan experts, and hundreds of laborers were involved in the site and have excavated hundreds of items; but the majority of the site contents remain unearthed.

After the Taliban took over Logar Province, where the site is located, Huffman worried that the world would permanently lose the huge archeological treasures and cultural heritage.

“All security run by the Kabul police at Mes Aynak have fled, leaving the site open to looters. This ancient city is now fully under Taliban control. The Taliban have a long history of destroying Buddhist heritage, like the Bamiyan Buddhas in 2001 and bombing the National Museum in Kabul that same year,” Huffman said, adding that Afghan archaeologists who risked their lives to study and save the city of Mes Aynak have also left the site.

“The Taliban is currently partnering with China to mine Mes Aynak as soon as possible. Mes Aynak holds over $100 billion worth of copper, and a Chinese government-owned mining company plans to open-pit mine the site, a process that will completely destroy the ancient city.”

However, in an article titled “China to offer ‘genuine’ aid in Afghanistan’s economic reconstruction amid chaotic transition,” Chinese state media, the Global Times quoted an employee of the Chinese mining consortium expressing hope that the mining will start under the Taliban-led regime.

The Global Times article, published on Aug. 24, stated that Mes Aynak mining couldn’t happen as planned because of “the necessity to remove landmines.”

As a completely landlocked country, Afghanistan hosted many way-stations on the ancient Silk Route. Being at the crossroads of human civilization, its cultural and archeological heritage consists predominantly of Islamic, Buddhist, and Zoroastrian histories.

“Afghanistan holds some of the world’s most important and unique cultural heritage, including hundreds of ancient Buddhist cities and religious centers, the oldest oil paintings ever discovered, and oldest preserved manuscripts and wooden statues, just to name a few,” Huffman said, adding that after Aug. 15, it’s not just Mes Aynak but hundreds of other archeological sites spread around the country that are under threat.

“Bamiyan, where there are still Buddhist caves and ancient oil paintings, is also under Taliban control. A plan to reconstruct the Buddhas and complete a museum there has all been abandoned.”

The Taliban blew up and destroyed the giant Buddha statues of Bamiyan in March 2001, which earned them global condemnation.

In peacetime situations, sites like Mes Aynak should be protected and should become tourist destinations, but the Taliban track record in these matters isn’t good, according to Huffman.

“Like I mentioned, this was already happening at Bamiyan with a plan for reconstruction and a museum. This would provide sustainable income for the area, and people from around the globe could marvel at the unique treasures of Afghanistan with their own eyes. Sadly, this idea now seems impossible.”

“Any damage or loss of cultural heritage will only have adverse consequences on the prospects for lasting peace and humanitarian relief for the people of Afghanistan,” UNESCO said in a statement on Aug. 19, adding that this heritage is a part of the Afghan history and identity and is of significance for the whole of humanity.

“This includes sites such as the Old City of Herat, the UNESCO World Heritage sites of the Minaret and Archaeological Remains of Jam, and the Cultural Landscape and Archaeological Remains of the Bamiyan Valley, where UNESCO has been working for several decades, as well as museums, including the National Museum in Kabul. It is crucial for the future of Afghanistan to safeguard and preserve these landmarks,” a UNESCO spokesperson said.

When asked if there’s a way to pressure the Taliban into preserving this cultural heritage, Huffman said, “The Taliban have been responsible for so much bloodshed and destruction, it is hard to have hope of any sort of positive outcome regardless of international pressure.”

Meanwhile, an MCC employee told the Global Times that the company is “evaluating the possible sanctions” by the United States and other G-7 countries, as sanctions can cut off the Chinese companies from the global banking system.