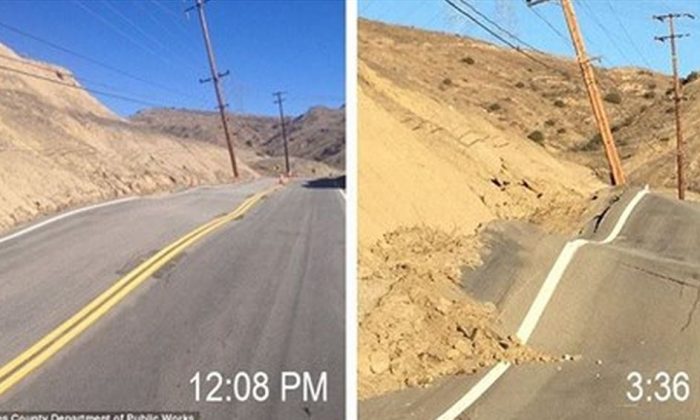 What’s Going On With This Road Near Los Angeles?

A road in Los Angeles County, California, buckled and rose from the ground this week–but there was no earthquake.

The deformation Vasquez Canyon Road in Santa Clarita took only a couple of hours, reported CBS Los Angeles, citing local officials.  There were reports that it was caused by a landslide, but officials appeared to dispute that as a cause.

A group of UCLA geology students and a geology professor are confused as to why it happened.

Soil has pushed a #SantaClaritaValley road 6 feet up. @LAPublicWorks says they’ve never seen anything like this. pic.twitter.com/ejTASofbzg

Drivers started calling the California Highway Patrol about the road rising up. The road kept on rising into a 200-foot-stretch, and it has grown by more than 15 feet in only three days, CBS reported.

“When we think about geology, we think about processes that happen over millions and billions of years, so the opportunity to bring students out and see something happening over a scale of hours gives them the idea that not only does geology take forever, it can also happen almost instantaneously,” Professor Boyce told CBS.

“It’s a completely different experience hearing about it in a class and then coming here and seeing it in real life, kind of watching it come to life,” UCLA student Sarah Casey noted.

“We can build all these buildings, but the earth does what it does, so it kind of puts into perspective our place in the world,” UCLA student Brittany Miles said.

“It’s not a recreation center — it’s an unsafe place,” Public Works spokesman Steven Frasher said this week. “We get that it looks cool, but it’s a very dangerous area to be on.”

The CHP shut it down, as it became unsafe to drive.

“It’s still actively moving out there,” Frasher added. “Until the geology of the site has settled, there’s nothing that we really could do.”