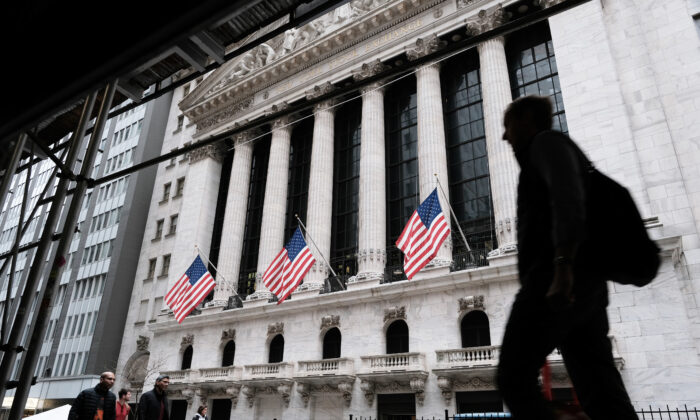 Investment firms, regulators use investor demand as a justification to advance ESG practices
By Emel Akan

Environmental, social, and corporate governance (ESG) investing has not only become a popular investment trend, but also a new front in the culture wars. Market predictions show that global ESG-mandated assets will reach $55 trillion in 2022 and close to $100 trillion in 2025.

But has the recent spike in ESG investing been driven by market demand or something else?

According to a survey (pdf) by Consumers’ Research, 76 percent of retail investors say that they use their investment income mainly to save for retirement or long-term financial stability and to supplement their income. Only 3 percent of retail investors use their investment income to promote sustainability, and only 2 percent use it to make social change.

“It is well known that institutional investors vote for environmental shareholder proposals at about twice the rate of individual investors,” Cunningham wrote.

Advocates of ESG investing assert that they’re empowering investors to align their investments with their values. Jonathan Berry, partner at law firm Boyden Gray & Associates and a regulatory litigator, challenges that argument.

“It’s fair to call ESG investing an elite preference, not a majority sentiment,” he says.

Speaking at this year’s Federalist Society convention on Nov. 10, Berry said “the administrative state” is the reason why the ESG has gained so much momentum recently.

“The administrative state encodes elite preferences like ESG because it stands outside of our constitutional system of democratic accountability. This is the core problem with a delegation of legislative power to the executive branch,” he said during a panel discussion at the convention titled “Woke, Smoke, or Smart: Regulators Push for ESG.”

Even if there had been a red wave in the midterm elections, he asserted, it would have a limited impact on the Biden administration’s rule-making agenda. There’s a steady progression of rules that reflect the priorities of the elite, he added.

“In the ESG space, we see rules being justified by reference to shibboleths like climate-related financial risks and diversity.”

Meanwhile, regulators around the world continue to push for the adoption of ESG investing standards. And the Securities and Exchange Commission (SEC) has often used investor demand as a justification for requiring certain ESG disclosures from public firms.

But this investor demand isn’t coming from “mom and pop” investors, Berry says. It’s BlackRock, State Street, Vanguard, and many other large institutional investors and asset managers that speak on behalf of investors who have money invested with them.

Investors can only pick from the options presented to them by proxy advisors, such as Institutional Shareholder Services (ISS) and Glass Lewis. For example, shareholder proposals related to racial equity saw significant growth in the first half of this year.

In addition, even if individual investors retain the right to vote, their influence is dwarfed by institutional investors, according to Berry.

“ESG is a vehicle for ideological control of capital allocation,” he said.

While speaking at the panel, Dalia Blass, head of external affairs at Blackrock and former director of investment management division at the SEC, noted that there were a “tremendous amount of misperceptions” concerning ESG.

“We are capitalists, and we really believe in the power of the capital markets,” Blass said. “Anything that we have done, from our voting to our views on the transition to a low-carbon economy, we do that as a fiduciary with the goal of driving value returns to our clients.”

Blass cited workplace diversity as an example, and stated that studies have demonstrated a correlation between diversity and a company’s performance. She explained that as a long-term investor, BlackRock seeks diversity because it drives value.

Investor funds are “not captive money,” she noted. “Our investors, if they don’t like what we do, they can redeem their funds.”

Blass also mentioned how much good has been done by the investment management business. Index funds were launched in the mid-1970s. Only 5 percent of U.S. households were invested in the stock market in 1980. It’s now close to 50 percent, she said, thanks to index funds.

Recent studies found that the companies in the ESG portfolios had poor compliance record for both labor and environmental rules. In addition, they underperformed their non-ESG counterparts.

These and many other issues have raised concerns about the objective and value of ESG, as well as stakeholder capitalism in general.

Judge Andrew Oldham of the U.S. Court of Appeals for the Fifth Circuit, who moderated the panel discussion, said evaluating a company’s success 20 years ago was a simple math.

Now, with the stakeholder capitalism, companies are required to focus on the triple bottom line—people, planet, and profit—which makes accounting more complicated, he said.