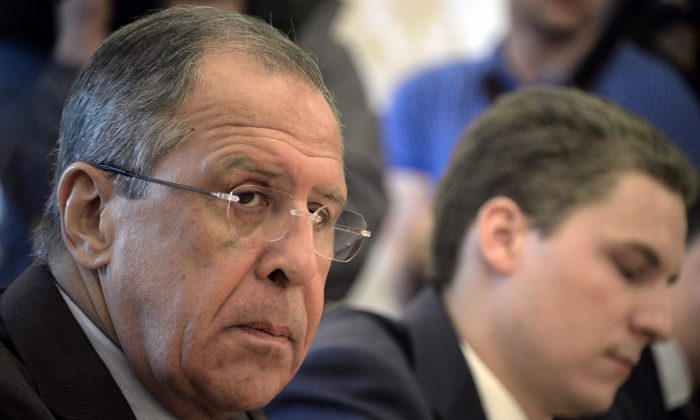 Russia's Foreign Minister Sergei Lavrov looks on as he meets with representatives of the Syrian opposition in Moscow on Aug. 31, 2015. (Alexander Nemenov/AFP/Getty Images)
Opinion

Evidence is emerging of a significant intensification of Russia’s military support for the Assad government. While the exact scale and purpose of Russia’s latest deployments remain obscure, the available evidence suggests that the Russians are preparing an airbase near Latakia City for possible airstrikes in support of the Syrian army, complete with several hundred Russian troops protecting it.

This is in addition to a Russian navy refueling facility already in operation in the port of Tartus, and substantial supplies of weapons and military advisers for the Syrian regime which the Soviet Union and Russia have been supplying Syria for decades.

Such is the concern in the West at Vladimir Putin’s motives for this military build-up in Russia’s war-torn client state that the reports prompted the United States to put pressure on the Greek and Bulgarian governments to close their airspace to Russian planes bound for Syria.

But what are Putin’s motives? For a start, the Russian president clearly wants to confirm his country’s status as a global power with its own sphere of influence which is able to act independently of the United States and is not dependent on the approval of Washington. This interpretation is supported by the logic of a breakdown in Russia’s relations with the West over the Ukraine crisis, which led some observers to call a return of the Cold War.

But, equally, it is also clear that Moscow is extremely worried about the rise of radical Islamic terrorism. Remember, not long ago Russia fought two bloody wars in Chechnya, mostly against radical Islamists. Its territory is home to some 17 million Muslims, many living in its poorest regions in the North Caucasus, where an Islamic insurgency continues and which bubbles up with periodic bursts of violence.

Moscow is also aware of the risk of insurgency from predominantly Muslim Central Asia—which it counts as part of its sphere of influence—from where several million have migrated to work in Russia. A history of insurgency and poor economic conditions make those regions vulnerable to Islamic State (ISIS) influence.

Putin recently confirmed that one of the biggest security threats to the former Soviet states that are members of the Moscow-centric Collective Security Treaty Organization (CSTO) is a potential expansion of ISIS in the Middle East, Europe, and the former Soviet Union (FSU). Putin specifically singled out ideological indoctrination and military training of nationals in FSU countries by ISIS and said their return home would be a major threat to security.

His concerns are well founded—there are an estimated 1,700 volunteers from Russia alone fighting with ISIS, mostly from the North Caucasus and Central Asia. A recent high-profile defection was the head of the Tajik special forces, Gulmuro Halimov, who was reported in June 2015 to have joined ISIS.

Putin would also be mindful that the more Russia can become an indispensable player in Syria’s civil war—and a potential broker of peace there—the more leverage it could give Russia with the West over other issues, especially over Ukraine and the economic sanctions imposed on Russia. However improbable this might sound, increasing his foothold in Syria could be a way for Putin to mend his relations with the West by building a joint anti-ISIS coalition.

This seems unlikely for now as removal of Assad is a non-negotiable condition for the West—as opposed to Russia, which sees maintenance of the current regime, at least for the present, as the only way to defeat extremist insurgency in Syria. But if the West is serious about defeating ISIS and the Assad regime survives with the Russian and Iranian help, then at some point it might have to consider joining forces with Russia against ISIS.

Towards an ‘Alawite Israel’?

To properly understand Russia’s involvement in Syria it’s necessary to consider a fundamental difference in Russia’s perception of causes of the Syrian debacle. The West saw the uprising against Assad as an expression of popular will within the framework of the inevitable progress of democracy, while Russia saw the conflict in more complex terms. For a start, Russia recognized the nature of the Syrian society with its ethnic and religious diversity, a strong army, and a close-knit ruling group. Coupled with a complex regional rivalries between the Gulf states, Turkey, and Iran—Assad’s most staunch supporter—the swift demise of the Syrian regime was always unlikely.

More importantly, the Kremlin has consistently prioritized stability over revolutionary change and sovereign rights over humanitarian intervention. In fact, from the Russian point of view, the Western interventionist agenda of democratization, which ignored local conditions, has made the situation in the Middle East worse—from Iraq to Libya and Syria.

It seems unlikely that Moscow can hope for an outright victory in Syria’s civil war, so some kind of political compromise with the moderate opposition is in the offing. This, however, is at best a long shot given the hostility to Assad in the West and the intensity of the conflict in Syria.

Instead, the immediate priority seems to be to ensure a survival of the Syrian state and military institutions in the areas it can control, what one Russian observer called an “Alawite Israel“—a strip of land from the Mediterranean coast to Damascus, able to at least contain ISIS with some external support.

How can the West respond to Russia’s latest initiatives? One option would more economic sanctions against Russia in order to dissuade it from supporting Assad. The West could also increase in its military presence, for example by creating a no-fly zones in Syria. Increasing military support for the opposition is another option, in the unlikely hope that it could topple Assad before ISIS does.

This would be mirroring Russia’s logic of escalation aimed at forcing the other side to change its attitudes by creating new facts on the ground. The likely outcome would be a doubling of support for Assad from Iran and Russia and perpetuating of the civil war. Finally, it could accept Russia’s view that it is unrealistic to get rid of ISIS and Assad at the same time, and choose the least bad option.

The last option seems unlikely for now, given the fundamental disagreements about the causes of the conflict as well as about its likely solution. Is there any cause for optimism then? Perhaps the only consolation is that there are no chemical weapons left in Syria. Those were removed under a joint U.S.-Russia plan in 2013.

This—sadly—remains the only concrete and positive outcome of Russia’s cooperation with the West in the Middle East.

Alexander Titov is a lecturer in modern European history at the Queen’s University Belfast, U.K. This article was previously published on TheConversation.com