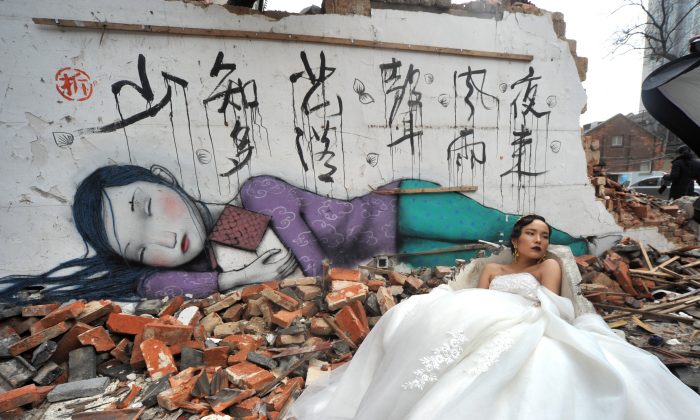 A bride poses for wedding photos before a graffiti mural on Kangding Road where old houses are demolished on January 22, 2015 in Shanghai. (VCG/VCG via Getty Images)
China

In 2011, the 25-year-old Li Xu met Zhang Yan, who was two years his senior. Within 20 days, love at first sight had become marriage and cohabitation.

This spring, Li, now a gaunt 30-year-old farmer arrived at his local county court and handed in his civil complaint. It was a plea to his wife, who lives in the rich, faraway coastal Chinese city of Hangzhou, to return to him.

The trouble started in 2013 when Zhang, the wife, left their rural county in central China’s impoverished Henan Province to find work. Once in the city she grew to detest her rustic beginnings, and a grudge was nurtured for her husband and his poverty.

Zhang’s last visit to her husband was in February 2015; she bade him no farewell. Desperate, Li came with her daughter, Xin Xin, whom she’d had by her previous husband and was being raised by Li’s parents, to look for her in Hangzhou. Instead, Zhang took back her dowry and the custody of her daughter.

The story of Li Xu and Zhang Yan is representative of an emerging trend in rural China, where divorce rates are marching lockstep with economic growth. Poverty, the physical distances between many couples, a massive gender gap, and the rift between traditions and urban lifestyle, are among the major agents in this divisive social shift.

Ningling County, where Li Xu met, wed, and was separated from his wife, is an unremarkable subdivision of Henan Province. It is home to about 580,000 of the province’s whopping 94 million residents, and is the subject of study by the state-run mouthpiece Xinhua.

Xinhua says that between 2013 and 2015, 85 percent of all divorce cases in the county were among those born in the 1980s or 1990s. Wives were the most likely to initiate separation.

Many factors are present in what has been dubbed “flash marriages” and “flash divorces.” Liu Kaiming, head of a non-governmental organization based in Shenzhen, told Radio Free Asia (RFA) that the primary cause is the elevation of women’s’ economic status.

“In the past, in a situation where women had no independent economic status, they basically had no way to divorce, since marriage was an important part of their subsistence,” Liu said. “Now … they have more freedom.”

Further endangering the rural marriage, and tying into the economic factor is the highly mobile nature of China’s workforce. Hundreds of millions of farmers-turned-laborers, both male and female, spend more time in cities, living far away from their families. China’s strict residency laws give rural couples little opportunities to raise their children away from home, so households are often split up for most or all of the year.

Another factor, often attributed to the 35 years of China’s one-child-policy, is the scarcity of women. Because of a traditional preference for male children, many Chinese, faced with the choice of one gender only, opted to abandon or abort their baby daughters. This has led to a “surplus” population of over 30 million young Chinese men and boys among the roughly 400 million Chinese between birth and the age of 24.

In a society where material wealth is strongly associated with social worth, China’s rural men are the worst-affected, as women flock to the cities for not just work but also romance. According to the Xinhua report, extramarital sex has jumped among female migrant workers, who often land expensive bride prices when they decide to marry.

Deng Xiaogang, a professor of sociology at the University of Massachusetts, told RFA of the massive impact of the sex ratio on marital relations: “The women have more choices. Second or third marriages, flash marriages, everything is possible.”

The gap between tradition and modernity is a potent, if difficult-to-quantify, influence. For many young couples who may have had their marriages arranged, the sudden transition to city life exerts a massive cultural shock.

Wei Feng, the judge presiding over familial affairs in the county court of Ningling, and who oversaw the case of Li and Zhang, explained to Xinhua the increasing propensity of young people to get divorced.

“After having their perspectives widened by work in the cities, some rural youth learn to pursue individuality, fashion, and to deal with marriage of their own accord,” Wei said with a wry smile. “They’ve become more sensitive; the slightest frustration can lead to separation.”

Meanwhile, on a day in the end of March, Li Xu waited in court with a glimmer of hope.

“If she ever comes back, will you be able to live with her?” the judge asked him.

“If she can come back, and we have a child together, I won’t leave her,” Li responded feebly.

But as Zhang Yan saw it, the marriage had well and truly outlived its usefulness. Entering the court fashionably groomed and dressed, she had rushed back to Ningling from Hangzhou “expressly to get the divorce done.”