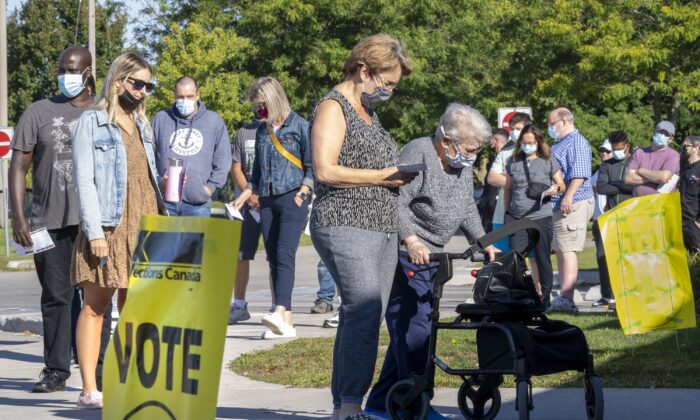 Voters line up to vote at a polling station in Bowmanville, Ont., on Sept. 20, 2021. (The Canadian Press/Frank Gunn)
Viewpoints

Whatever the Election Outcome, Be Grateful We Could Vote Freely

As a man once muttered to my mother while staggering off the golf course, thank goodness that’s over. I refer of course to the federal election. But what can I say, writing before knowing an outcome that may be crystal clear by publication time? Or mud-murky because of all the mail-in votes, etc. My guess is everybody lost. But also won.

Making seat projections is a game pundits love to play during campaigns. But I’m not sure the audience enjoys it much and it’s no good once the votes are counted and you know whether you got lucky. Voters probably did not.

My regular reader is aware that I find the choices grimly uninspired. Even the endorsements seem resigned as the Toronto Star stuns us by backing the Liberals, the National Post opts wearily for Erin O’Communism, and Le Devoir chooses (wait for it) the Bloc. And the United Steelworkers… well, you get the idea.

Years ago, I advocated that the Ottawa Citizen editorial board refuse to endorse anyone, and my editor declared it unthinkable, a rare lapse of judgement on his part. But soft. I come to praise the election as well as bury it.

So let’s take a step back and celebrate the fact that we didn’t know the result ahead of time. Unlike Russian editors who didn’t have to stay up late before hitting “print” on “Putin’s ruling party clinches election win.”

Actually in one sense, clichéd and important, we too knew our result in advance. We knew we would get to vote, our ballots would be counted fairly, and for all the cheap shots and rants about tyranny, plutocrats, and the Great Reset, every party leader and at least half of partisans were comfortably certain that, whatever the outcome, nobody would be rounded up and shot, jailed, or beaten to a pulp.

Nor do we really think because our party lost, there will never be another election. I notice that Justin Trudeau said he’s open to electoral reform and, after mopping up my coffee, I wish to declare that it’s still a bad idea. In endorsing O’Toole and dismissing Bernier, Conrad Black observed in passing that “France did not have a single-party parliamentary majority in its first four republics from 1793 to 1958, but Canadians generally prefer a majority government.”

I think we are right to do so, and to adopt a system in which every election is like this one would be one more step away from functioning self-government. But one taken from cheery ignorance, not the sort of malice that prospers in many political systems.

Like Russia, where the second-most seats went to the Communist Party. Yes, nearly one in five voters wants Stalin back, while a great many support Putin because they think he already is.

Now consider France. It’s actually better governed than most of the world. (Oh sorry, was that your coffee?) But instead of a parliamentary majority between 1793 and 1958, it had several hideous bursts of mob rule followed by dictatorship, petty bickering, and mobs again. Napoleon III was no Stalin, or even Napoleon (instead prompting Marx’s jibe “History repeats itself, first as tragedy, second as farce”) but the Paris Commune was no joke. Whereas here we will vote, and vote again, without fear. Don’t forget to be glad, grateful, and resolute.

We won’t vote without trepidation. At least I won’t. On current trends, insolvency is probable and foreign conquest conceivable. Canada is not governed seriously, and people eventually weary of systems that break faith in ways big and small. Plus citizens here are increasingly docile, which is not the spirit of eternal vigilance liberty needs.

So I could wax ominous and will again. But not before recalling a writer in Global Affairs citing “a lapse into totalitarian thinking described by George Orwell in his Political Essays: a grotesque failure in one’s sense of proportion.” I’ve never found the original and perhaps, unusually, the paraphrase improved on it. Either way, one thing to resist in democracies is this poisonous tendency to describe opponents as monsters.

It’s increasing, from all sides. The left raved about Bush Jr., and even more laughably Bush Sr., the right about Obama, and here in Canada there’s far too much of it. But as Adam Smith did say verbatim, “There’s a lot of ruin in a nation.” Democratic habits, not just the mechanics of speechifying and voting but the personal self-government on which the political sort depends, the decency, restraint, and confidence that our fellows will rally to their defence in a real crisis, remain strong despite the antics of politicians and partisans.

So yes, despite everything including the candidates, seat count, nasty campaigns, and broken promises past, present, and future, I can predict in advance for publication afterward that we all won this election. Let’s celebrate it.