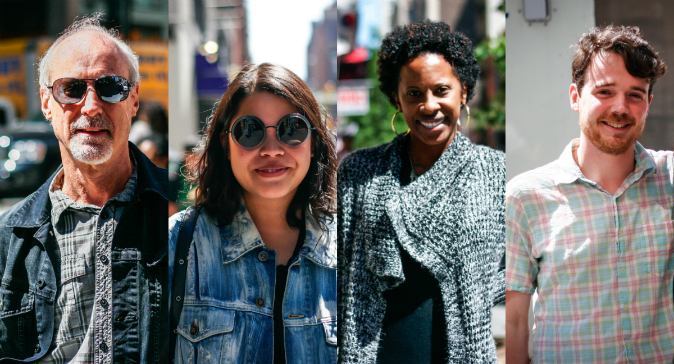 What Would You Do If You Left Your Cellphone at Home?

The first cellular phone was invented in 1973, and while cellphones were not be the dominating technology for some time to come, it was the beginning of a technological revolution that would dramatically change society. People no longer need to memorize phone numbers, and they can speak to people almost anywhere—mobile phones made people, well, mobile.

After a few decades, what started off as a basic phone, then becoming a mobile phone, has now evolved into the smartphone—a computer in the palm of your hand, and with more apps to help you in life than you can count. It is like having your own personal digital assistant—an assistant many can no longer live without—or can they?

Epoch Times asked New Yorkers if they think they can survive without their cellphones for 24 hours.

“Go back home,” Christopher said firmly, when asked what she would do if she were to leave her phone behind.

“I wouldn’t make it,” she said. Her phone is where she keeps all her personal information, as well as staying connected with her friends and family on social media. “I mean what do you not do on your cell phone?” she asked.

Munoz, who uses his cellphone to text and call his family and friends, didn’t have his phone on him when he spoke to Epoch Times. “I don’t carry it unless I think it’s going to be necessary,” he said. Other than that, his friends and family will find him if they need him, he said.

“Yes, but it is going to be super hard,” Mak said. She also said she felt like a “drug addict” when she spent 4 days without her phone. “I kept thinking about it, you even want to borrow someone’s phone just to check your Instagram or your Facebook,” she told Epoch Times.

When Mak lost her phone, she said the first two days was the hardest, “but you get used to it,” she said.

“You do more physical activities,” Mak said. But she said she would never intentionally leave her phone behind.

“Oh yeah,” Daniels said casually, when asked if she can survive without her phone for a day. She said she’s been without her phone on some occasions, including when she went camping. “There was no reception,” she said. “Not having access to your phone, sometimes it’s really nice.”

Besides camping, Daniels has left her phone behind at other times and said she was more than fine. “You worry about it like ‘omg what if someone texts me or what if something happened?’ And when you get home, you realized nothing happened.” She also said not having a phone is “less distracting.”

However, he said he’d feel as if he wouldn’t know what is happening in the world, saying he needs his phone for news and email—but not Instagram, which he said he couldn’t care less for.

His friend, Erica, said she has spent “several hours without her phone, traveling abroad,” she said. “The hardest thing when traveling without a phone is not having a map, we rely on our phones to navigate.”

She said she has also left her phone at home at times: “It’s annoying, not a pleasant feeling,” she said.

When asked if she came home to loads of text messages and calls, she said, “No, no way, maybe a couple. I’m not that popular. I’m not that important.”

“You probably had at least three or four missing from me,” Bryan chimed in.

Rivera said “lack of communication” is the impact of leaving his phone at home, but he wouldn’t be able to do anything about it.

“Only thing you can do is listen to the messages when you get home,” he said.

When asked if he would go back home if he forgot his phone, he said, “I’m too level-headed to get crazy over that.”

Rivera said the only thing he does on his phone is call his family and his girlfriend, “that’s it,” he said, “I’m not into the text, or the internet.”

But he also said it is always important “to have your phone because you don’t know if there is an emergency,” he said.

Brannon flatly said she can’t survive without her phone for 24 hours, “I can’t even take a break now without it,” she said. She said she’d be bored because she uses her phone for Facebook, Snapchat, and Instagram.

She said she would definitely go back home to fetch her phone if she were to leave it at home—unless she is on a deadline.

Being without a phone for a day would make her more in-tune to what is going on around her, she said, but it still wouldn’t make her communicate with people more. She also said a lot of text messages would be waiting for her when she gets home.

Daley is going on 61 years without having a cell phone.

“There’s always been phones, and there’s always a place where one can make a phone call. There used to be phone booths … but they are all gone now,” he said.

Daley said he can afford a phone, but doesn’t see a “necessity to be completely connected all the time.”

“If I needed to contact people, I know where a phone is, and I can make a call,” he said. But he does have a home phone and a work phone.

If he has to cancel, however, “I’ll find my way to a phone and make the call, other than that I’m there,” Daley said.

Although Daley doesn’t have a phone, that doesn’t mean he memorizes people’s contact information.

“I have a list of numbers in my wallet,” he said, and if he knows he is going to go out with a particular person, he’ll write their phone number on a piece of paper before he heads out, saying it’s about “planning ahead.”

“I don’t need no dependency on a device that could or could not lose battery power, or put me in a situation where I’m like ‘I don’t have my phone, my whole life is ruined—because hey, why should that be the case?” he said.