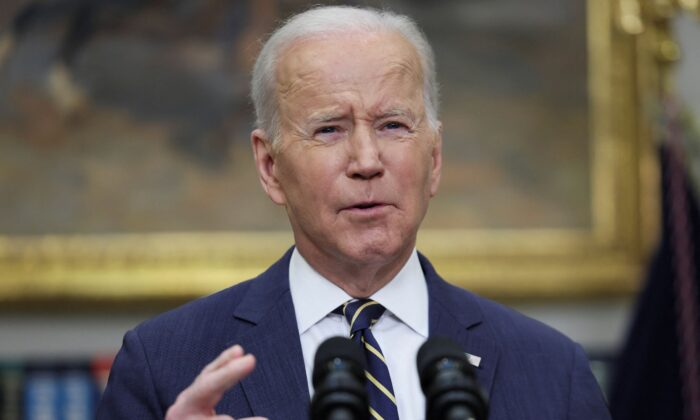 U.S. President Joe Biden announces new actions against Russia for its war on Ukraine, during remarks in the Roosevelt Room at the White House in Washington, on March 11, 2022. (Evelyn Hockstein/Reuters)
Opinion

What Would Joe Do?

A thought experiment: Suppose Vladimir Putin said tomorrow that any country sending aid in the form of lethal weapons—weapons certain to be used to kill Russian soldiers—to Ukraine would be retaliated against with a 10-megaton nuclear bomb detonated over its capital city.

What would a Western leader contemplating sending such aid do, or say, in response? The answer isn’t obvious.

I think such a leader would not do what Western leaders have been doing so far, which is murdering Putin with their mouths and promising that he and his army will “pay a price,” presumably in blood, for his aggression.

Joe Biden might continue to say such things, but his handlers, like other responsible leaders, would surely think twice before continuing with their threats and promises.

But then what would they do?

You’ve heard the expression “losing face.” No one wants to lose face, but politicians and others in authority really don’t want to lose face. If they do, their authority and, thus, their effective power goes with it—even if they manage to cling to office.

Putin would lose face if he made such a threat and didn’t follow through on it—which may be why he hasn’t made it (yet).

But he is still living in the old-fashioned world of honor among nations. It was on behalf of what he sees as Russia’s national honor that he undertook the invasion of Ukraine. Defeat there would mean to him the loss not only of his own honor but that of his country.

Such ways of thinking may seem strange to us, but they were taken for granted by everybody 100 years ago.

Then, in the wake of the unprecedentedly destructive World War I, advanced thought in the nations of the enlightened West, especially Britain, France, and the United States, decided that the old idea of wars fought for national honor was out of date.

Germany didn’t. Hitler, who rose to power with the help of the “stab in the back” theory of Germany’s humiliation and loss of honor in that war, was his country’s answer to Western pacifists who thought wars for national honor were things of the past.

Subsequently, Western enlightened thought was forced to come to terms with the fact that it wasn’t possible for a country unilaterally to opt out of the system of honor among nations—not, at any rate, while retaining its identity as a country.

Except that the supposedly enlightened ones who remained in power in the Western democracies never really did come to terms with it. In opposing Hitler and his Axis partners, the allies tacitly acknowledged that they were fighting for their countries’ honor, only they were ashamed to admit it. They would have lost face to admit it.

That’s why ever since, in America anyway, we always must insist that we only go to war with the purest and most moral intentions against enemies whom we accordingly treat as pure evil. How could we—the world’s good guys—ever go to war against any enormity of less than Hitler-like proportions?

And each time when, with the publication of the Pentagon Papers or the failure to find weapons of mass destruction in Iraq, it’s revealed that our moral motives were not of the purest and we were only fighting for national honor after all, it’s treated by the media as scandalous.

You would think that such a cartoon version of geopolitical strife, constantly promoted by the enlightened media, would sooner or later get us into real trouble—as false ideas about the way the world works always do get people into trouble.

But so far, we’ve been lucky. The world’s supervillains who have dared to incur our righteous wrath have mostly not been in a position to do us much damage in the homeland—to which we can always withdraw, as we did from Afghanistan last year, if they hurt us elsewhere.

More formidable potential enemies, meanwhile, such as the Soviet Union during the 50 years of the Cold War, have assumed that all our moralizing is just fluff, for domestic consumption only, and that if they were to attack us, we would respond as if we were as jealous of our national honor as anybody else—as we did against the Japanese after Pearl Harbor.

In the light of the Afghan withdrawal, however, I wonder if our potential enemies still make the same assumption.

In our haste to beat a retreat from that “forever war,” we cast away all considerations of national honor, all sense of obligation to the Afghans, who looked to us for promised protection, and abandoned all that remained of our reputation for national resolution and fortitude in the face of a declared enemy—along with 80-odd billion dollars worth of military equipment for the use of such enemies, past and future.

And yet this shameful and ignoble collapse, our president told us, was an “extraordinary success.”

You may not see the Afghan debacle as a loss of national honor, but I guarantee you that Putin does. So does Xi Jinping.

Maybe we’re not the same country we were on Dec. 7, 1941. Maybe this time, we really believe that honor is nothing much to lose, and certainly not worth the loss of millions of innocent lives because of a quarrel in a far-away country between people of whom we know little or nothing.

If I were Putin, that’s what I’d be thinking right about now. It’s what I would have been thinking of for months as I contemplated the likely consequences of invading Ukraine.

And so we return to the little scenario I sketched at the beginning of this column. What would any Western leader do in the face of such a horrifying threat? What would Joe Biden do?

As he has shown that he is capable of rationalizing any national failure as a personal success, I wouldn’t count on its bringing him back to reality. But what do you think? More importantly, what does Putin think?