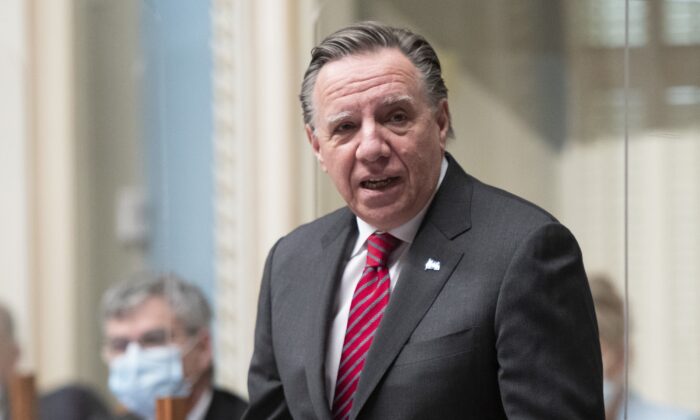 What Will It Take to Bring Sanity Back to Quebec Schools?

Perhaps it will take Quebec schoolchildren imitating their counterparts of a century ago to restore sanity to adults responsible for the disgrace of a hijab-wearing teacher being removed from a classroom.

Little else seems capable of lifting the veil of political obtuseness obscuring the real-world infamy of the province’s law banning the wearing of “religious” garb in some public sector workplaces.

Only last week, so-called Bill 21’s perniciousness was on public display with the ignominious “reassigning” of a Grade 3 teacher, Fatemeh Anvari, from her classroom at an elementary school in western Quebec.

Her mistreatment illuminated the reductio ad absurdum injustice of punishing a qualified teacher by exiling her to do bureaucratic make-work administering—you truly couldn’t make this up—inclusion and diversity policies. Yet the good and the great who lead Quebec in the National Assembly, or stand as its members of Parliament, managed little better than muted throat-clearing at the debacle.

Indeed, far from backing down, Premier Francois Legault doubled down by insisting the punted pedagogue should never have been hired in the first place.  Never mind that Quebec is facing almost crisis levels of teacher shortages. Even fundamental workplace fairness, based on accepted standards of reasonable accommodation, didn’t matter.

No, no, the Premier warbled. Obedience must be enforced, über alles, to Bill 21. According to Legault, Avari should have been deemed unemployable within Quebec’s public education system for wearing what—to non-Muslims at least—amounts to a headscarf at work.

Ben voyons donc, as my compatriots here in la belle province are often heard to say.

But such colloquial calls for a return to good old-fashioned Québécois common sense, which would have dominated discussion on any other topic where such wrongheadedness was so self-evident, have been little heard. It leads me to think what’s needed is a reach back into history for an Aberdeen School Strike moment that will shake the populace, and therefore the politicians, awake.

In late February 1913, students at the majority Jewish Aberdeen School in Montreal bolted from their classrooms when a teacher spewed loathsome antisemitic bigotry at them. The strike actually began among young pupils before quickly spreading to the older kids. A delegation marched to the offices of a prominent lawyer and prevailed on him to help galvanize community support. They then stayed on strike until a certain Miss McKinley was ordered to apologize.

As historians Roderick MacLeod and Mary Anne Poutanen write in their paper “Little Fists for Social Justice: Anti-Semitism, Community, and Montréal’s Aberdeen School Strike, 1913,” the gumption and perseverance of the Jewish students sent political shockwaves through the Montreal Protestant School Board and the wider city.

The students got their apology from Miss McKinley, who had ululated a classroom tirade against “dirty” Jews and demanded their banning from the school. The youngsters also exposed—and called to account—entrenched bigoted attitudes within the Protestant board. Within a decade, MacLeod and Poutanen note, reforms led to the number of Jewish teachers going from zero to 70. (Those who wonder why Jewish pupils were part of a Protestant school board should dial 1-800-Mishegoss.)

“The strike had long-lasting consequences for the Jewish community, for Protestant school board policy, and for the character of Québec’s education system,” they write. “The Aberdeen students’ actions were remarkable. They showed maturity in their understanding of ‘the strike’ as a strategic response to perceived injustice, in their degree of self-confidence, and in their resolve, even when faced with mounted police who had been called in to control the situation, and with possible reprisals from teachers and parents.”

Intriguingly, MacLeod and Poutanen reference other early 20th-century anti-bigotry strikes such as one by Chinese students in Victoria, B.C., and the 1918 “Flag Fight” by Zionist pupils in Toronto over unacceptable integration policies. The question arises: Would a similar shock delivered by today’s students, this time in support of teachers such as Fatemeh Anvari, rescue Quebec from its Bill 21 nonsense?

Something has to. It must, for reasons of justice, fairness, and decency. It’s equally essential to reconcile reality with the vision Quebecers have of themselves. Using Bill 21 to force teachers from classrooms as if they were “uppity Negros” in the American Deep South circa 1963 is no one’s concept of Quebec in 2021. Yet as the year ends and a new one looms, it remains unjustly and incongruously in place.

Asking kids to reconcile adults with reality might seem a heavy burden to lay on young shoulders. But history shows, through events such as the Aberdeen School moment, that they’ve done it before and could conceivably do it again. Over to you, young ’uns.