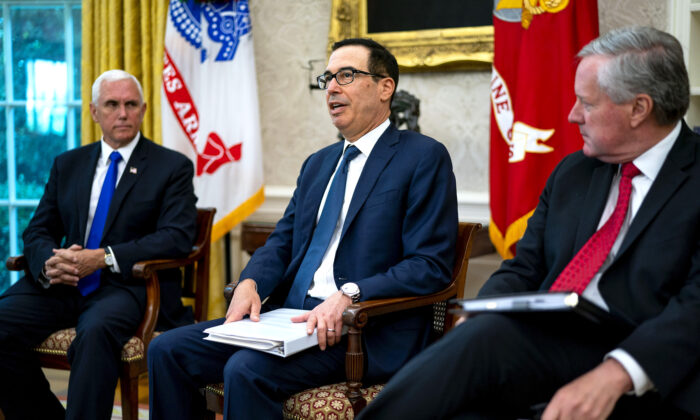 What It Will Take for GOP, Democrats to Reach a Pandemic Relief Deal

House Speaker Nancy Pelosi (D-Calif.) said on Aug. 13 that talks between the White House and Democrats on COVID-19 relief will only resume when Republicans provide $2 trillion.

“I don’t know. When they come in with $2 trillion,” she said, when asked about when talks might restart. “We can’t wait until September 30. People will die.”

According to Pelosi’s office, she and Mnuchin spoke on Aug. 12 by phone, but the conversation didn’t break the stalemate, with Pelosi saying she made the $2 trillion offer, and Mnuchin responded with a rejection.

He said Pelosi’s statement was “not an accurate reflection of our conversation.”

“She made clear that she was unwilling to meet to continue negotiations unless we agreed in advance to her proposal, costing at least $2 trillion,” Mnuchin told reporters.

White House press secretary Kayleigh McEnany told reporters that Pelosi’s offer to reduce by $1 trillion is unspecific, adding that the top Democrats “wouldn’t even tell us what they would take out of the $1 trillion.”

“So they said we’d come down a trillion, but wouldn’t list out the things they would take out of their Democrat wish list,” she added.

A key point of disagreement is the $1 trillion in funding for state and local governments that Democrats have sought in their HEROES Act. Republicans have proposed a lesser amount. Democrats are also opposed to Republicans’ proposed liability waiver for businesses and hospitals.

Democrats also want to reinstate the $600 weekly unemployment supplement until January 2021 and provide funding for mail-in voting. Trump, in particular, took issue with the voting proposal, telling Fox News on Aug. 13 that Democrats “want $3.5 billion for something that’s fraudulent … for the mail-in votes, universal mail-in ballots.”

“They want $25 billion for the post office. They need that money so it can work and they can take these millions and millions of ballots,” Trump said.

Mnuchin, meanwhile, said the White House is willing to forge ahead on the talks.