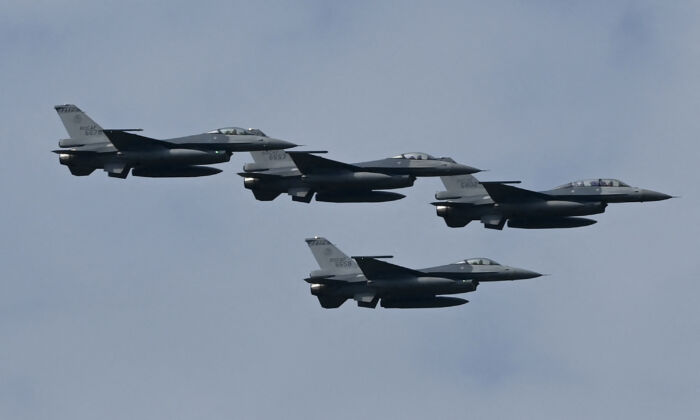 Four upgraded US-made F-16 V fighters fly during a demonstration at a ceremony at the Chiayi Air Force in southern Taiwan on Nov. 18, 2021. (Sam Yeh/AFP via Getty Images)
Thinking About China

What Will Communist China Do Now?

China won’t publicly announce its adjusted invasion plans for Taiwan or elsewhere. But by carefully parsing public statements, we can see the regime is learning the lessons from the Russian invasion of Ukraine.

The Chinese Communist Party (CCP) has been watching developments in Ukraine with keen interest. Even before the Russian invasion, many analysts thought Xi Jinping would give the order to invade Taiwan. But there have been developments in that war that suggest the ways China must improve before it can launch an invasion.

The CCP will never come out and say that its military is unprepared for an invasion. But through Kremlinology, analysts trying to gauge China’s plans can carefully parse public statements that reveal the regime’s intentions. After studying the CCP’s statements, it is clear the regime is taking perceivable steps that directly address the issues of world opinion, training of soldiers, and logistics.

One of the most surprising reactions to the invasion was the sudden shift of world opinion. Vladimir Putin had invaded Georgia and seized the Crimea with little effective or serious consequences. And NATO seems fractured with President Joe Biden admitting in a press conference just a few weeks before that NATO probably couldn’t agree on sanctions.

But then the invasion happened, and suddenly the opposite happened. Aside from a dispute over transferring MiG fighter jets, America and NATO stand united, Germany cancelled its gas pipeline with Russia, and the European Union passed tough sanctions and sent many weapons to Ukraine. The united and fierce opposition has formed a vital part of the defense of Ukraine.

The Chinese communists are seeing this, and they are vigorously laying the groundwork that justifies seizing Taiwan. When an Australian official talked about the regime’s aggression toward Taiwan, Beijing shot back in an official statement, claiming that Taiwan is an internal matter. The exact quote is astounding for its tortured logic.

In response to a reporter’s comment on Australia’s commitment to Taiwan against Chinese aggression, the spokesman for China’s Ministry of Defense said at a press briefing on March 10 that Australia “grossly interfered in China’s internal affairs and wantonly distorted China’s actions to safeguard national sovereignty and territorial integrity, which fully exposed their Cold War mentality and ideological prejudice, and seriously damaged the relationship between the two countries and the two militaries.”

Even though the Chinese regime is the aggressive one in signaling a potential invasion, it lashed out at Australia in a bid to deflect blame and criticism. I doubt this rhetoric will stop Western powers from “interfering” in the case of a Chinese invasion, but President Joe Biden seems unwilling to help Ukraine (it is an assertive Congress that is forcing his hand). So the regime only needs to convince a few elites in Congress to sap American support and Beijing is good at manipulating Western guilt.

The Russian forces have performed very badly. They have fought with poorly trained conscripts and lack a good base of officers and noncommissioned officers (NCOs.) Thus, it is no surprise that China is addressing training and decision-making in general.

China on March 5 announced a giant increase in its military budget that will cover important items like increased training and logistical efforts. As I’ve explained, the regime cooks the books, so if it announces an increase that large, the actual increase is likely much larger.

One of the main focuses of this money is for combat training and readiness. Given Russian training and the likely state of China’s People’s Liberation Army (PLA), we should expect to see more stories that detail the increase in training in China. Most analysts will likely report this in scary terms, but we might reasonably view this as a concession that the CCP is worried its soldiers will perform as badly as the Russians in Ukraine.

Second, and more importantly, it likely shows the government believes that in the case of war, it will last long enough to be able to call up and use reservists. This undermines the theory of some kind of lightning hybrid or gray-zone warfare. The theory suggests that dazzling new weapons and tactics would allow China to conquer Taiwan in one swift action. At least one analyst has suggested that the use of methods short of war is not an innovative game changer, but an admission that the regular military doesn’t have the ability to successfully conduct an invasion.

China must be worried that its planned invasion would take longer than expected because it is also increasing its logistical capabilities. One of the complaints of American war making is that Washington spends way too much time building up forces. But after watching a Russian convoy lumber at a snail’s pace toward Kyiv because of a lack of spare parts and fuel, I can understand the need to stockpile.

In addition to training, China’s increased budget also goes toward logistics. Despite advancements in the field already, Chinese analysts emphasized the need to modernize the military’s logistics and build a modern weaponry and equipment management system.

Parsing these words suggest that China does not have a modern logistics system that can handle modern warfare. This might stun some people, but it shouldn’t be surprising to students of history. Nazi Germany’s Panzer Divisions, for example, were the wonders of modern warfare when unleashed on Europe, but they were often supplied by horse and carriage, especially as the war dragged on.

China could be in the same situation of having amazing weapons but only a limited supply of them. This would dazzle with the intent to overwhelm opponents in a short war, but show their limitations in a long one. Unfortunately, in the matter of logistics, the authoritarian regime just can’t help itself. In the CCP’s efforts to prove to the world that it is so great and it can contain COVID-19, it has shut down key sections of China’s supply chain. The CCP can’t even ensure that domestic supply chains during peacetime work properly, so any logistical improvements would likely be only small and over the long term.

The war in Ukraine is a tragic event with an uncertain future. But China is already learning lessons from the conflict. It is trying to increasingly isolate Taiwan from the world, strengthen the caliber of its soldiers, and build up its logistical capabilities. It is uncertain how effective these measures will be in the CCP’s stated goals, so the wise course is to stay vigilant against communist aggression.