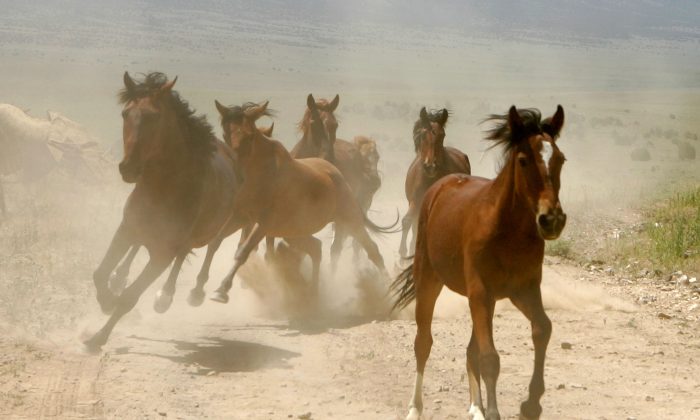 There are few places on Earth that are truly free. Those wilderness areas that remain are so isolated or inhospitable that the land will not sustain life. Where visionaries have set aside natural reserves they have been beset by poachers, pollution, and human entry for economic gain. In a world of economy competing for natural resources, what will become of public lands in the United States that are now home to wild horses?

“Ranchers pay $1.35 per animal unit per month to graze on public lands,” said Karen Sussman, a prominent wild horse conservationist. “[An animal unit] consists of a cow and her calf. You can’t feed a hamster for that,” she said. Where else can ranchers graze cattle so cheaply without buying land or paying real estate taxes?

Ranchers aren’t the only special interest group to want public land free of wild horses and thus open for their own purposes. Public lands are exploited by hunting interests and they contain many valuable natural resources.

In this mix of economy versus ecology, the wild horses must go.

In this mix of economy versus ecology, the wild horses must go.

Special interests with paid lobbyists in Washington demand that publicly owned horses be removed from publicly owned lands. They are aided by false and misleading information supplied by the Bureau of Land Management (BLM) to Congress.

The BLM is responsible for America’s public lands. Its self-expressed mandate is to “protect and manage wild horses and burros under authority of the Wild Free-Roaming Horses and Burros Act of 1971 to insure healthy herds thrive on healthy range lands.” This is the same BLM that approved the first production well in the National Petroleum Reserve in October.

Sussman rode into the wild horse conservation movement slowly. Since childhood she has been in love with horses. This grandmother of five adopted a mustang and rode it into Arizona’s deserts. She is a registered nurse by profession, but she took an interest in horse welfare organizations and started volunteering.

Living in Scottsdale—Arizona’s Beverly Hills, its Palm Beach, its French Riviera—Sussman did well as a socialite at the charitable galas frequented by the rich and famous. Then she focused her efforts on the International Society for the Protection of Mustangs and Burros (ISPMB), founded by friends of Velma Johnston (1912–1977). Johnston, better known as Wild Horse Annie, was a petite polio victim who worked as a secretary in an insurance office; she started a crusade to save America’s wild horses.

Sussman took up the reins from Wild Horse Annie, and she now runs the operation out of a double-wide trailer in Lantry, South Dakota.

Before the work of Wild Horse Annie, the U.S. government let contractors round up wild horses and send them to slaughter houses where they would be turned into dog food and fertilizer. Horse slaughter houses have closed in the United States, but the BLM still conducts regular roundups of wild horses using helicopters and ground vehicles. Some are released, but many are put in feed lots and offered to the public for adoption.

Mustangs languish in feed lots. And the new wrinkle is that any horse offered for adoption three times can be disposed of.

False statistics are used to bolster false claims that wild horses will become uncontrollable pests if their population isn’t culled.

False statistics are used to bolster false claims that wild horses will become uncontrollable pests if their population isn’t culled.

Furthermore, the BLM’s population control has put a kink in the course of nature that is devastating the conditions for the wild horses that remain.

Statistics are manipulated depending on how much money the BLM wants to suck out of Congress.

It gives high numbers when seeking appropriations. The BLM published statistics as of March 1, 2014, reporting that there are 40,815 wild horses and 8,394 burros under its jurisdiction.

Nobody really knows how many wild horses remain in the American West. Some put the figure low at 24,000, others at 37,000. These figures do not account for wild horses on Indian reservations or in private conservancies that have adopted them.

The BLM decries population growth in wild horse herds. It even makes unfounded statements that wild horse herds will double every four years if not controlled. As part of its statistical summary, the BLM adds, “Wild horse and burro populations on the range typically increase an average of 20 percent per year based on the animal foaling rates.”

“Their statistics are wrong. Their basic premise is wrong,” Sussman said.

In the wild, population is controlled by nature. When humans interfere with natural elements that control populations, the result is usually a disaster.

Sussman has methodically followed the population and mortality rates of the four herds in the care of the International Society for the Protection of Mustangs and Burros. She concluded from her 16 years of study—compiled from Jan. 1, 1999 to Jan. 1, 2015—that the birth rates in functional herds allowed to exercise normal herd behavior are far less than what the BLM reports.

BLM herds that reproduce at 20 percent per year are mismanaged herds, Sussman said. They are dysfunctional herds that have been interfered with, rounded up every year and sorted. They are not natural herds anymore.

What Sussman determined is not surprising. In the wild, population is controlled by nature. When humans interfere with natural elements that control populations, the result is usually a disaster.

The Catnip herd is an example of a herd that has become dysfunctional due to the BLM roundups and selective releases. It is one of the four herds of wild mustangs—totaling more than 550 horses—Sussman manages on the International Society’s South Dakota ranch. The horses live as they would in the wild, yet they recognize Sussman and she knows every one of them.

The Colossus of Existence: Why the Elephant Is Invaluable

Wildlife Gives a Wake-Up Call for Our Survival

She said of the Catnip herd: “Only young ones were let go back into the wild. They had no mentoring. There were no older stallions to maintain discipline, no dominant mares to guide the herd. Their breeding young mares and their behavior is typical of a herd that has been rounded up and sorted. It is like having a teenager running a school. There is no learned experience and no horse etiquette.”

We have become sorcerers on a grand scale. We try to adjust nature in one place to suit our purposes only to discover that we have created a disaster somewhere else.

We have become sorcerers on a grand scale. We try to adjust nature in one place to suit our purposes only to discover that we have created a disaster somewhere else.

The BLM’s arguments that wild horses destroy rangelands and eat down the grass, pollute water holes, and destroy the environment are also based on false statistics governed by greed.

On May 16, 2014, Sussman sent a letter outlining her studies to Secretary of Interior Sally Jewell with copies to Neil Kornze, director of the BLM; and Joan Guillfoyle, the BLM Wild Horse and Burro Division chief. She has not even had the courtesy of acknowledgment let alone a reply from these officials.

As citizens, we cannot accept public employees who do not respond to important correspondence. They are paid to heed advice from the public. Certainly Sussman, as president of a well-respected and also the oldest wild horse conservation group, is someone to be heeded.

Sussman wrote in her letter: “We have concluded that the method of BLM’s management of wild horses is actually increasing their fertility rates due to the heavy-handed disruption and destruction of the social structures from frequent roundups.”

A government agency is wasting money, destroying America’s heritage, and debasing the very mandate they have been given by the U.S. Congress.

What will become of America’s wild horses? They will eventually disappear. There will be conservancies that maintain horses received from the BLM. None of these horses will be complete herds with intact family bands. The genetic pool of special herds like the Gilas or Kiger Mountain Spanish Mustangs will be forgotten in time.

America’s memory is feeble when it comes to misdeeds and environmental genocide. The few advocates who still try to obtain proper government action are ignored. Wild horses, like bison and wolves, are anachronisms, victims of human greed and caprice.